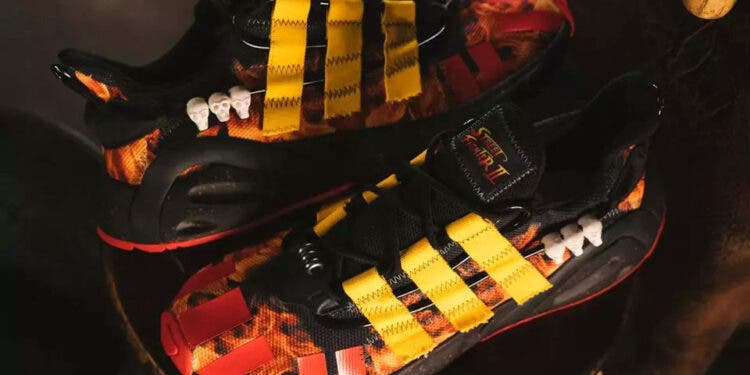 We’ve seen some great partnerships in the past from adidas. The brand hasn’t shied away from embracing its geek side, having previously seen collaborations with Marvel, Disney, Cyberpunk and more. This time around, adidas has partnered with Capcom and Bait for a collaboration with another geek classic. Enter the BAIT x Street Fighter x adidas sneakers collection.

BAIT is a streetwear and sneaker retail store. It was founded by Eric Cheng in 2013 with several locations around the US. It’s known for quite a few significant collabs in the past, with this Street Fighter tie-in extending its current range.

With its biggest collaboration to date, the brand pulled out all stops for the BAIT x Street Fighter x adidas drop.

As part of the collection, the range features two of adidas’ classics in the Ozweego and Lexicon sneakers. Both of these silhouettes have received modern makeovers in recent years, and once again became an instant hit among fans.

There are four colourways tied to characters from the Street Fighter game. This includes Ryu, Chun-Li, E. Honda and Dhalsim. The Ryu and E. Honda designs are featured on the Ozweego sneaker, with Chun-Li and Dhalsim on the Lexicon.

My favourite from the BAIT x Street Fighter x adidas collection is the Dhalsim Lexicon. It features the colours from the character, along with some additional elements. What stands out the most are the skulls on the rear, mimicking the necklace the character wears.

The BAIT team has also included matching Street Fighter tees which pair nicely with the collection, although do not receive the adidas branding.

The BAIT x Street Fighter x adidas sneakers are available on BAITme.com and retails for $140 each.

Unfortunately, there’s no news as yet on whether the collection will be making its way to South Africa shores. If you do wish to get your hands on the release, be prepared to pay an additional $12 in tax, plug a $50+ shipping fee, excluding any local taxes that may apply.