Sometimes a small gift can turn into a record-breaking collection. Having started his collection in 2017, he now has a total of approximately 5306 figurines. The stylised vinyl models depict licensed characters from comic books, movies and games.

Paul started collecting Funko Pops after receiving Hawkeye and Spider-Man from Marvel’s Captain America: Civil War movie for his birthday. The gift inspired him to start researching the different types of Funko Pops on the market.

From that point forward, he looked to collect all the comic book related figurines (Marvel and DC). When he realised there were several lines (including movies, television and animation) he started by purchasing those that interested him, which grew to collecting most of the lines and trying to complete sets.

The figurines are displayed on organised shelving along the walls of his basement. The majority live outside their boxes, others are placed on top of the shelving units for display, and the rest are stored in large labelled containers for easy access. But the most valuable Funko Pops are kept inside their box within a protective case.

To catalogue the entire collection Paul uses the online tracker, Pop Price Guide as well as his own extensive excel spreadsheet.

Super excited my Guinness World Records video dropped this week for the Largest Funko POP Collection!! Check it out!! https://t.co/zvqyUxTkq1

Speaking about his collection, Scardino said was surprised and thrilled to find out that he’d set this record.

“I received an email from Guinness World Records in the morning while at home, and I held off reading it until my wife was able to see it. As I read the email out loud, I felt intense elation and satisfaction, as the months-long effort had paid off, and I would officially be a record holder. I was super excited to hear from Guinness World Records that I was chosen to be in the 2021 Edition.” 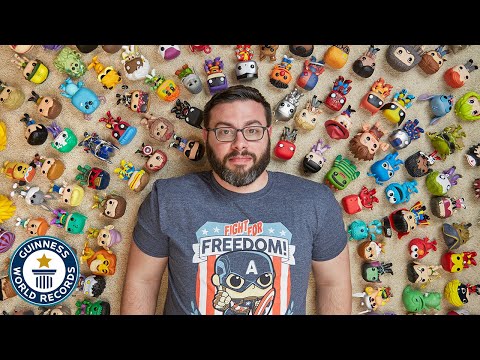 While Paul’s collection highlights one passion, he is also a clinical social worker who is dedicated to social justice and equality. He spends a lot of time supporting mental health causes and initiatives in addition to services for at-risk youth. More Lay-Offs To Hit Funko Inc. Due To COVID-19