Hi everyone. The Green Inferno is an Eli Roth movie. If you know who he is, and you’re still interested, please carry on paying attention to this film.

If you don’t know who he is, why don’t you go watch some YouTube videos online first? Go on – he’s a lovely man with many adorable films about kittens and puppies frolicking playfully in a peaceful meadow. 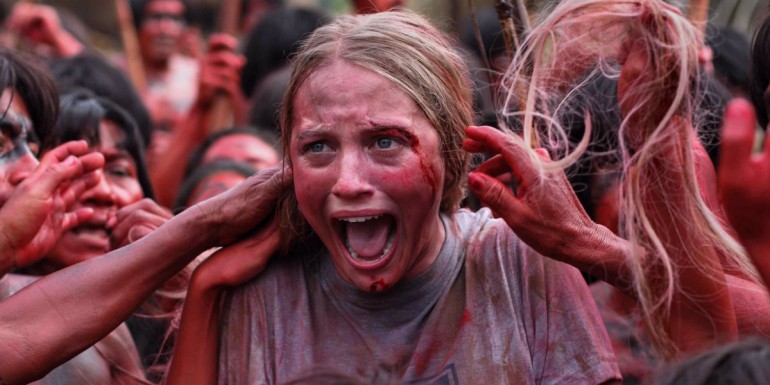 Sadly, I wish that were true. Today’s feature is The Green Inferno, a film in which cannibals eat 20-somethings in incredibly graphic ways for a couple of hours. If that sounds nice to you, you’ll enjoy this. Frankly, I didn’t see the point. There’s a couple interesting ideas that get buried under all the excessive (and I mean excessive) violence and blood.

There’s a point being made about how the young westerners are all activists who believe they’re here to save the rainforest and the indigenous tribes, only for the tribes to care nothing for them and instead aim only to eat them. It’s a vaguely intelligent idea about cultural values that could be discussed, but I think it got lost somewhere around the point where one of the victims ate a whole a bunch of weed, before the cannibals ate her and in turn got high, and we got to witness the fabulous artistic answer to the question “what if cannibals got the munchies?” Bravo Roth, you are the Michelangelo of our time. I joke, but in some ways the film does break apart the typical dichotomy of good and bad films. It’s a good example of a film that I find very appalling, but which you can see is still made with genuine interest and love. In that way, its still superior to a film churned out for a cheap buck.

However, needless to say, this film is probably for an audience that already knows all about it and is interested in picking it up. To you lot, good luck. To everyone else, this film is about as graphic as any serious release could be, and I urge you only to watch it with the full understanding of what you’re getting yourself into. Be warned.