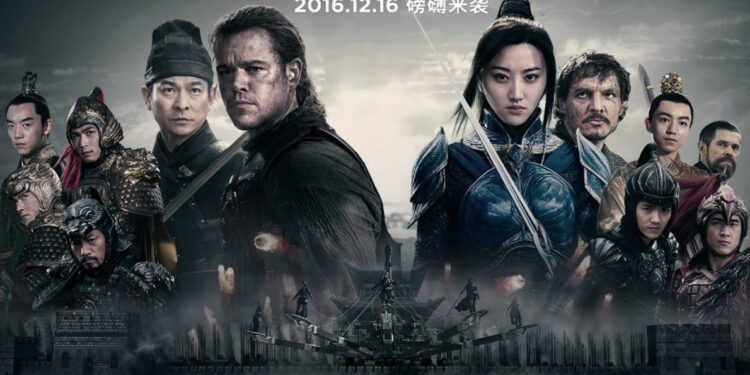 West meets East in The Great Wall, a video game-inspired fantasy flick that delivers on spectacle in the hopes of courting China’s enormous viewing public. Despite being paper thin, there is rarely a dull moment in its 104-minute run time. While it suffered in the rest of the world, Warcraft was one of China’s most anticipated films of all time, raking in a whopping $156 million in just five days. Univeral Pictures found a new market and with The Great Wall they intend to target those same fans with another crowd-pleasing tale of fantasy action. This time Matt Damon, the film’s great white saviour, joins a predominantly Chinese cast in stopping a sea of monsters attacking China’s world wonder. While the trailers promised a dull night at the movies, the actual film delivers a lavish cross-cultural action blockbuster that is big on fun and entertainment. Backed by Chinese-owned Hollywood studio Legendary, The Great Wall looks to test the waters and hopefully bridge the divide between East and West. In the hands of acclaimed director Zhang Yimou, the most expensive film ever made in China has some breathtaking visuals. You can’t help but sit back in awe of some of the battle sequences, which sometimes sees millions of creatures scurrying across the landscape. While there are some issues with the CGI here and there (some unrealistic rendering), there are some daring scenes that pay off and can only truly be appreciated on the big screen.

If you’re looking for a story, however, it’s best you look elsewhere. The Great Wall isn’t interested in boring you with details or reasoning. It’s looking to increase your heart rate, keep you laughing, please your eyes with beautiful displays of colour and throw you into the heart of the action. You’ll be forgiven for comparing the choreographed battle sequences (which sometimes look like gymnastic manoeuvres) with a high-production ballet. Yes, logic is sorely lacking here, but audiences won’t care. The plot is as unsophisticated as they come. Matt Damon’s Wiliam is a man who has spent most of his life fighting in wars for money and his small share of fame. While scavenging a desert, William and his trusted side-kick, Tovar (Pedro Pascal), slay a strange beast. Not long after, they are captured by Chinese military and find themselves in the middle of a war between man and a horde of monstrous creatures that attack every sixty years. Along the way, William learns the true value of trust and friendship.

The Great Wall is a simple film and if you keep your expectations moderate or low, you’ll thoroughly enjoy it. It’s mindless popcorn blockbuster fun.