Home > Movies > Quentin Tarantino: An Ode To One Of The Great Directors Of Our Time

Quentin Tarantino: An Ode To One Of The Great Directors Of Our Time 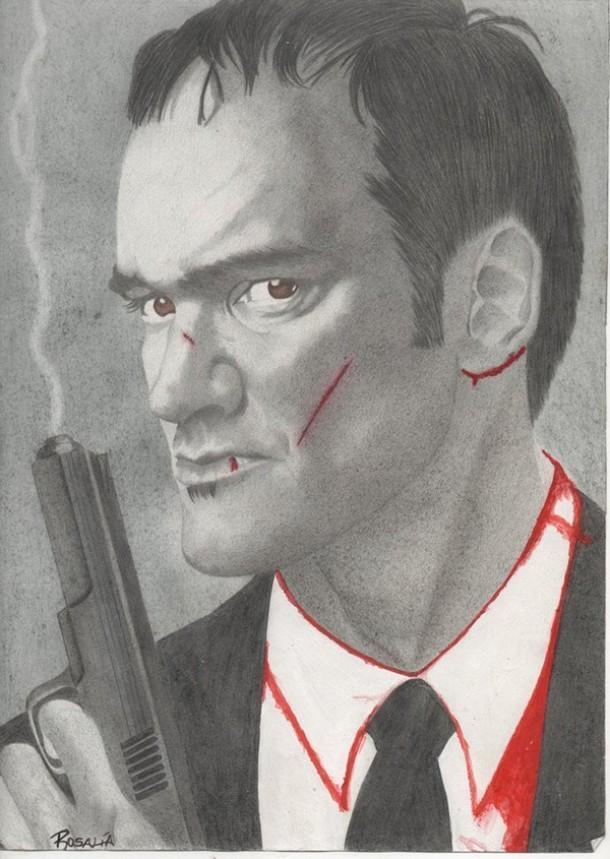 The unexpected and unconventional career of a humble video store employee turned movie producer, director and writer has caused more than its fair share of controversy. Boy-wonder Quentin Tarantino, renowned for his use of quirky dialogue, pop-culture references, stylised violence, distinctive soundtracks, non-linear storytelling and his unhealthy foot fetish, has made a huge mark on Hollywood, like it or not. Although there have been many unmatched Tarantinoesque copies of his work, anyone who has had the privilege of seeing a Tarantino film can easily recognise his unique voice and style.

“I don’t believe in elitism. I don’t think the audience is this dumb person lower than me. I am the audience.” – Quentin Tarantino

“He wrote me sad Mother’s Day stories. He’d always kill me and tell me how bad he felt about it.” – Tarantino’s mom, Connie McHugh

Born on March 27, 1963, Quentin Tarantino wasn’t your average kid. His mother explains that he developed his love for movies and storytelling at an early age. As a teenager Tarantino acquired a hatred for school, preferring time at the movies instead, and dropped out of high school at a young age. He later took up acting and found a job at Video Archives in California. There he worked with Roger Avary, the co-writer of Pulp Fiction.

Over the years the five-time Oscar winner has earned himself a cult following, but like everything else in the world, great directors don’t start off by creating a chef-d’oeuvre. Like any other form of art, directing requires practice and hard work. Tarantino’s first work, My Best Friend’s Birthday, shot on 16mm film in 1984 on a $5000 budget, serves as proof.

Written by Craig Hamann and Tarantino, My Best Friend’s Birthday is an amateur black and white film directed by Quentin Tarantino which supposedly got destroyed in a fire. Made on an extremely low budget of just $5000, using several video store and acting class buddies, starring Tarantino himself, My Best Friend’s Birthday has never actually been released. Only 36 minutes of the 70-minute long film remains.

Although it isn’t anywhere near the brilliance of his future projects, the film shows off Tarantino’s clever use of dialogue and humour which alludes to dark themes – like Clarence’s bad coke experience while doing a live radio show. The script, as you can tell, went on to be the basis of the successful True Romance, which helped put Tarantino on the Hollywood radar. Tarantino himself refers to the experience as “film school”.

A group of thieves assemble to pull off the perfect diamond heist. It turns into a bloody ambush when one of the men turns out to be a police informer. As the group begins to question each other’s guilt, the heightening tensions threaten to explode.

Three storylines intertwine to provide an insider’s view of a series of crimes. A couple is trying their hand at robberies, a washed-up boxer rips off the mob, and two gangsters try to protect the contents of a briefcase.

A former assassin, known simply as The Bride (Uma Thurman), wakes from a coma four years after her jealous ex-lover Bill (David Carradine) attempts to murder her on her wedding day. Fueled by an insatiable desire for revenge, she vows to get even.

Stuntman Mike (Kurt Russell) is a professional body double who likes to take unsuspecting women for deadly drives in his free time. He has doctored his car for maximum impact; when Mike purposely causes wrecks, the bodies pile up while he walks away.

“Inglourious Basterds” begins in German-occupied France, where Shosanna Dreyfus(Mélanie Laurent) witnesses the execution of her family at the hand of Nazi Colonel Hans Landa (Christoph Waltz). Shosanna narrowly escapes and flees to Paris.

With the help of a German bounty hunter, a freed slave sets out to rescue his wife from a brutal Mississippi plantation owner.

In the dead of a Wyoming winter, a bounty hunter and his prisoner find shelter in a cabin currently inhabited by a collection of nefarious characters.

If you’ve seen more than one movie by Quentin Tarantino, then you’ve surely noticed his signature POV trunk shot. Although he did not invent it, Tarantino popularised the trunk shot, which is featured in Reservoir Dogs, Pulp Fiction, Jackie Brown, and Kill Bill.

Another popular angle Tarantino uses often is called the God’s Eye POV. This shot is filmed with the camera directly above the actors. It is used to convey something bigger than the characters is watching them and what they are doing.

Quentin Tarantino is clearly a footman. The evidence? There are multiple scenes of feet in nearly every film he has made to date.

Quentin Tarantino’s obsession with creating his own unique cinematic world is bigger than you might think. He has even gone as far as creating fake brands unique to his films. The list of products include:

1. His middle name is Jerome.

2. With the exception of Death Proof, all of his films feature actors from Martin Scorsese’s Mean Streets.

3. Tarantino has said that he intends to retire from filmmaking at the age of 60 to focus on novel and film literature writing.

4. He directed an episode of American TV show ER called ‘Motherhood’ in 1994. He said about it: “I didn’t want to stand out. Everyone else was wearing all that crap. I wanted to fit in. I didn’t want to be the odd man out. I wanted to be inside, not on the outside. When I was directing the ER thing, the emergency room guys wore the green scrubs. I wore those for a few days. Then, I wore the blue scrubs, which were the surgeons’, for a few days. When I wore the nurse’s pink scrubs, though, that’s when I became a hero on the set. The nurses didn’t think I was going to throw in with them. I ended the episode, the last two days, wearing the nurses’ scrubs. When I walked on the set all the nurses applauded me.”

5. He has more acting credits than directing ones.

6. Tarantino was offered the job of directing Men in Black but decided to turn it down.

7. Due to his hatred of racism, he has claimed Calvin Candie, the central villain in Django Unchained played by Leonardo DiCaprio is the only character he’s written that he’s hated. He’s said: “I hated Candie and I normally like my villains no matter how bad they are. I can see their point of view. I could see his point of view, but I hated it so much. For the first time as a writer, I just f*cking hated this guy.”

8. After watching Reservoir Dogs, Madonna, who was the subject of the opening dialogue, sent Tarantino a copy of her Erotica album with the message “To Quentin. It’s not about dick, it’s about love. Madonna.”

10. One of the names carved into the bat carried by The Bear Jew in Inglourious Basterds is Anne Frank.