Grand Piano Review – Avoid This Film At All Costs 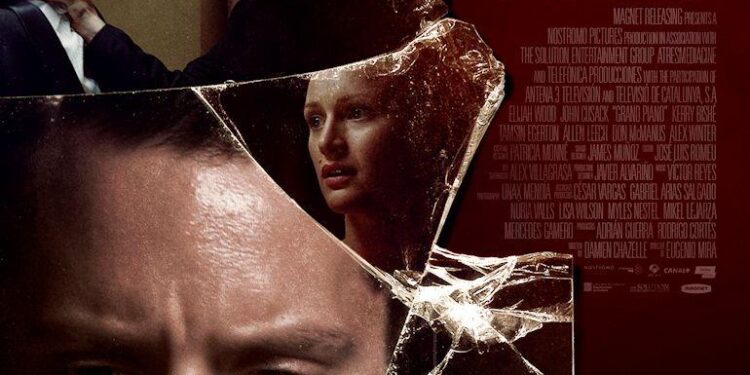 After a 5-year absence from the spotlight, prodigy pianist Tom Selznick returns to play his first live performance. As he begins he finds a note saying “Play one wrong note, and you die”. He now has to give the performance of his life while trying to figure out who the mystery writer is. We review Grand Piano.

Grand Piano attempts to set up the characters and the situations but does a poor job of it. It rushes through it so quickly and so vaguely that you either end not caring or just wanting it to get to the main part of the story. With the music and the opening titles, it seems to try and emulate the style of the old classics thrillers but, unfortunately, falls short.

Once we get into the main meat of the story, as Selznick is sitting at his piano being carefully watched by a mad man with a sniper rifle, it becomes very predictable and boring. It leaves nothing for imagination and leaves you slouched in your seat instead of on the edge of it, as a good thriller should. There is an attempted twist in this film, but it is passed over so quickly and revealed in such an uninteresting way that you hear it and couldn’t really care too much about it. There are two or three characters in this film that have no purpose in it, and makes you wonder why they were even put there. The main characters are completely unrelatable, and even when they are in dangerous situations, you don’t care whether they survive or not.

Elijah would is terrible, I don’t know whether his acting skills have diminished since Lord of the Rings, but he was not believable at all in this movie. The villain in this movie is played by John Cusack, who is on screen for about a total of 5 minutes. They could have got anyone to play his character and it would have been exactly the same.

The way in which they filmed this movie was an attempt at the style of old Hitchcock thrillers which was interesting, not quite as effective, but it wasn’t terrible. And the end of this film has no payoff, it ends leaving you empty and wishing you had done something different with the last 90 minutes of your life.

I would say avoid Grand Piano at all costs. If you have 90 minutes to kill, rather have a nap. I’m sure your dreams would be far more interesting.