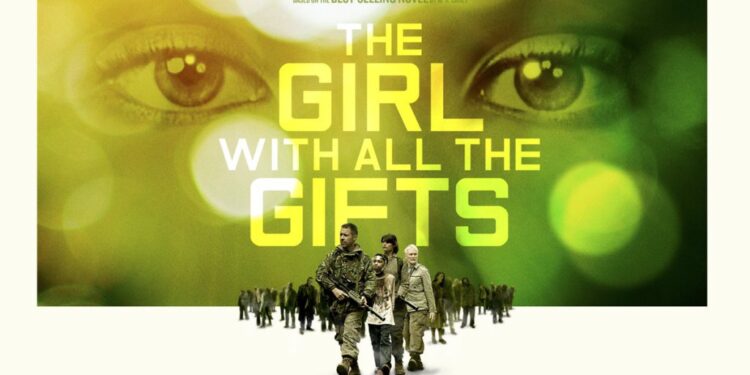 With the zombie genre cemented by The Walking Dead and 28 Days Later, there isn’t a lot of unscavenged territory left to explore. The Girl with All the Gifts attempts to bring freshness to the decaying subject matter. However, those who’ve played Naughty Dog’s The Last of Us will find themselves in a familiar world. The film’s chilling opening sequence sets the tone. A very polite young girl named Melanie (Sennia Nanua) is strapped into a wheelchair at gunpoint. To the audience, she seems completely harmless, but her captors know otherwise. Melanie is part of a school where ‘hungry’ children are restrained and taught by their loving psychologist/teacher Helen Justineau (Gemma Arterton) on a military base. The ‘hungry’ all suffer from a disease (developed from a fungal infection) that causes them to behave in manic frenzy when they come in contact with uninfected humans. Of course, it’s not long until all havoc breaks loose and the walls of safety are broken down. Oddly, Melanie comes to her teacher’s aid and helps the uninfected travel to safety.

The screenplay by Mike Carey, from his own original highly acclaimed novel, is well-crafted and sets The Girl with All the Gifts in good steed. However, after an intriguing first act, the film does follow a few familiar zombie tropes as the team wanders about rubble towns. You’ll immediately pick out The Last of Us inspired scenes. What truly sets The Girl with All the Gifts apart from other films in the genre is its great performances, even from the young cast. Sennia Nanua is believable and charming as Melanie. She engages her world as if it were magical, bringing hope in a hopeless world. The same praise can be given to Gemma Arterton, who shines as the darling of Melanie’s eye. The cast ensemble is only enhanced with the appearance of Glenn Close and Paddy Considine who excel at moving the plot along.

There are a number of missed opportunities in the film, but nothing that can’t be overlooked. For some, the film will be saved from mediocrity by Nanua. For others, The Girl with All the Gifts will feel fresh and emotive. It certainly tugs at the heartstrings.