Ghostbusters: Answer the Call is now on DVD.

Reboots are the trend in modern Hollywood; right up alongside superhero franchise movies and book adaptations. As a kid of the 90s, which I am, there’s a sense of nostalgia, excitement, and fear it may just ruin all those happy memories. Not only is it advisable not to relive your animated series, like He-Man, Conan the Barbarian, BraveStarr, or TMNT, it may be advisable to stay clear of movie adaptions of those cartoons as well. Then we get to the topic of reboots. Films such as Gremlins, Back to the Future, The Goonies, E.T., and Ghostbusters, should never be remade.

After more than a decade of attempting to get Ghostbusters III into production, the decision to reboot the franchise was made in 2014 after Harold Ramis, who played Dr. Egon Spengler, died in February that year. Unlike the original, however, the film would feature four female characters, Kristen Wiig (Erin Gilbert), Melissa McCarthy (Abby Yates), Kate McKinnon (Jillian Holtzmann) and Leslie Jones (Patty Tolan).

Ghostbusters: Answer the Call also stars Chris Hemsworth as Kevin the receptionist, and Neil Casey as Rowan North, the evil janitor. Less than three months after having hit the big screen, Columbia Pictures has released the DVD, with the addition of a subtitle, now known as Ghostbusters: Answer the Call. Does this early release give you any indication on the quality of the film?

Unlike many a fanboy, I started off the 2016 reboot with some hopeful expectation, not wanting to write it off simply because there were so many bad reviews and negativity surrounding the film. The quartet of female protagonists do a good enough job at delivering a good comedic performance, but not sufficient enough to provide a good sense of believability in the film as a whole.

One character that’s supposed to play the part of comic relief in Ghostbusters: Answer the Call was Chris Hemsworth’s depiction of the “not all there”, sexy receptionist, Kevin. For me, however, the slapstick comedy he’s supposed to provide falls rather flat. While the role does portray Hemsworth in a new light, he’s had a lot stronger comedic performances over the years, even as the dim-witted, eye-candy. 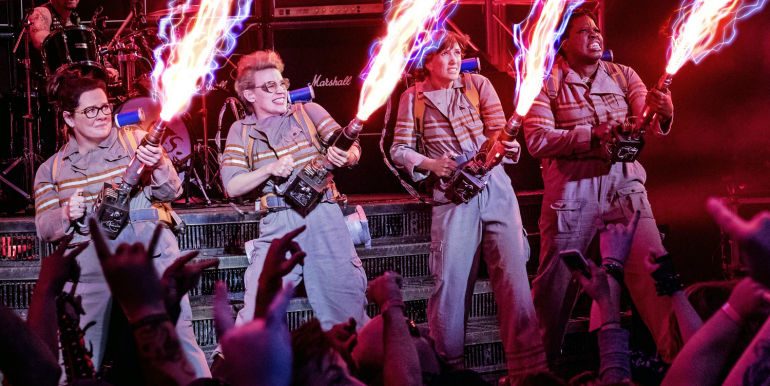 The 2016 reboot doesn’t drift too far from the 1984 classic written by Ivan Reitman, Dan Aykroyd, and Harold Ramis, receiving a huge makeover in the form of 21st-century special effects. The biggest change to the film was the removal of the ‘gatekeeper’ and ‘keymaster’ narrative, which added a rather convoluted plot to the original.

As in the original, the crazy terminology used throughout Ghostbusters: Answer the Call gives you a sense that everything was just made up on the spot, and while I can appreciate the whimsical nature of such ridiculous terms, it is laid on a bit too thick at times. The weapons arsenal also falls into the same category, although it isn’t spread on as thick, which makes it more enjoyable with some gags and laughs during weapons testing. There are a few enjoyable moments scattered throughout, which includes a few cameos from the original Ghostbusters cast.

A number of versions of the Ghostbusters tune is heard throughout the film, even the 1984 original theme song, which made me wonder what the main theme was exactly. My assumption was that the film would be played out to the tune as it fades to the credits, which was exactly correct. The theme, however, is not a crowd-pleaser. If by some miracle you could avoid having to listen to it, I’d suggest you do just that.

Ghostbusters: Answer the Call was released on 4K UHD and Blu-ray with an extended cut, which features an additional 15 minutes of footage, while the DVD received the original theatrical cut. Sony hopes the early release to reduce the budget loss on the film, in order to make up the rumoured $70m to break even. The film, in its own right, isn’t a bad one, but doesn’t have enough moments to eclipse the original. There are some good laughs and fun to be had, but I wouldn’t go as far as to rewatch the film more than the once I did to review the DVD.