by  Lyle Arends
in Gaming Bolivia, 2019. A country fallen to the Santa Blanca – a formerly small-time Mexican drug cartel that has gained immense power and influence under the leadership of the brutal El Sueño, allowing them to turn Bolivia into a narco-state and more importantly, the largest producer of cocaine in the world. We review Ghost Recon: Wildlands. What’s it about, hombre?

Santa Blanca’s influence has begun to spread well beyond Bolivia, with the United States one of the countries affected, something they’ve tolerated up until now, because when a bomb targets the U.S. embassy in Bolivia and a DEA agent is kidnapped, tortured and killed by the Santa Blanca, the US government implements Operation: Kingslayer, dispatching an elite team known as Ghosts to destroy the cartel and their operations once and for all.

This fight isn’t going to be easy, though, as the Ghosts will have to travel the entire country, taking out the individual heads of this (hail) hydra, shutting down each part of the cartel as well as assisting the local rebels, so that they can get to El Sueño and finish this fight and finally free Bolivia once and for all.

Ghost Recon: Wildlands‘ story is pretty straight-forward and you’ve seen it a dozen times before, but here, the saving grace is the Santa Blanca and its diverse members. There are quite a few of them that you’ll have to take down, with each region having its own boss, and these characters are truly fascinating to get to know. I really don’t want to spoil anything, but these characters range from utterly deranged to utterly entertaining. As you play their related missions and find intel on them, you’ll reveal their larger picture and I found myself going out of my way to find said intel on these characters just to learn more about them. Ubisoft Paris has created a fascinating world with the Santa Blanca, and it’s something worth experiencing. Okay, ese, that sounds good, but what do you do, Pendejo?

Okay, firstly, I’m not a pendejo. Secondly, you take on the role of the leader of this Ghost team and after the first mandatory introduction mission, you’re free to tackle Bolivia and its 20 plus provinces in any order you see fit. These provinces vary in size, but all have more or less the same set of activities to do and this is the game’s biggest issue – the repetitiveness of it all.

Each province features a Cartel boss, hidden weapons/ attachments, interrogation targets, Intel, skill points and resources to obtain for the rebels – but thanks to the game’s size, these get tedious after the first few provinces, especially the rebel-related missions. Defend this, switch that off, stop that convoy, deliver that vehicle or interrogate that guy – same shift, different province. However, you’ll have to do these not only to help upgrade the rebels, but also acquire resources which are vital if you want to upgrade your Ghost. When it comes doing the above, being a Ghost Recon game, you’ll have to be fairly tactical. You can use your drone or binoculars to tag the enemies in an area, then mark up to 3 targets to perform a Sync Shot, where your team fires on you to take down those marked targets simultaneously. Once you take out the stragglers from afar, you can move in to get close and personal. To make this easier, you can take out generators and use the dark as your ally – but again, this can get repetitive. You don’t want to sound the alarm, so the above formula is the standard affair for each encounter. But if you screw up, prepare for a tough fight because even on normal difficulties, enemies are deadly, but luckily, your AI squad is shockingly competent and can handle themselves really well.

Doing all this allows you to level up, which in turn lets you unlock skills. But, the skill progression is odd here, as things like Nightvision, C4, flashbangs and other vital equipment needs to be unlocked, rather than something you’d start off with and would have to improve. Even the other skills seem like a complete waste, which is attributed to the game’s modern setting, thus no crazy future technobabble. You aren’t the only upgradable thing, because as you find more gun parts in the world, you can create your dream gun via the on-the-fly Gunsmith feature, and it was interesting to play around with different builds, often in the same firefight, but this does take away from the intensity of any encounter, seeing as you can use any of the kabillion guns at any time, removing a strategic element of planning an assault. Alright, mi amigo – tell me, though… How’s it on the eyes and ears, gringo?

Ghost Recon: Wildlands looks really good. You’d think that the game being as big as it is, there’d have to be sacrifices, but nope, the game shines in this department, thanks mainly to the diversity of Bolivia. You start off in little rural villages and towns, but as you play, you’ll find yourself in mansions, jungles, deserts, salt flats, snowy mountains, and swaps – and they all look fantastic. You’ll do a lot of travelling in the game (which is not made easy by the vehicles which control like a drunken potato on a water slide) and some gorgeous vistas to take in on your long journeys makes the drive/flight a little more pleasant.

The audio side of things isn’t as impressive. For the characters, your side of the conflict has stereotypical, (at times overly) cheesy dialogue, with the Santa Blanca once again stealing the show – especially El Sueño’s cold, powerful demeanour. The game’s musical score is also pretty timid – but at least the guns sound good. Especially the always satisfying, “Thip, thip, thip” sound of hitting an enemy with a silenced weapon. I’ve run out of Spanish words, what else you got, bruh?

Nothing, compadre. But I will sum it up for you: Ghost Recon: Wildlands has potential. It has fun gameplay, an amazing set of enemies and an interesting setting – but its repetitiveness its only real downfall as of now. If Ubisoft Paris does this right, they can save it from going the way of The Division which went the way of the Trash Bird and turns the game into a true beast. But as of now, Bolivia is a place only worth visiting as long as there are Santa Blanca bosses to take on, but after that… Well, who knows? 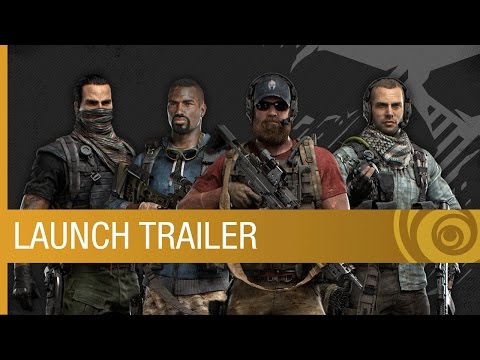