Home > Gaming > We Attended the Ghost Recon: Wildlands Launch – My Day As a ‘Ghost’

We Attended the Ghost Recon: Wildlands Launch – My Day As a ‘Ghost’ Today, 7th March 2017, sees the release of Tom Clancy’s Ghost Recon: Wildlands worldwide. A few days ago, however, media and a few members of the public were treated to a full day of airsoft in the “Wildlands” of City of Dead, Randfontein.

In a somewhat secluded and isolated deserted mining town, a group of excited individuals set out to fulfil a set of objectives, filled with obstacles and wildlife (complete with butterflies and locusts). The setting would see teams split into two main groups, the ghosts and the mercenaries from the Santa Blanca Cartel, each of whom were further broken down into smaller teams. What was great about the day’s events is that it was based on some of the sequences and objectives from the Wildlands game itself, where players would operate in military-like objectives of varying nature. 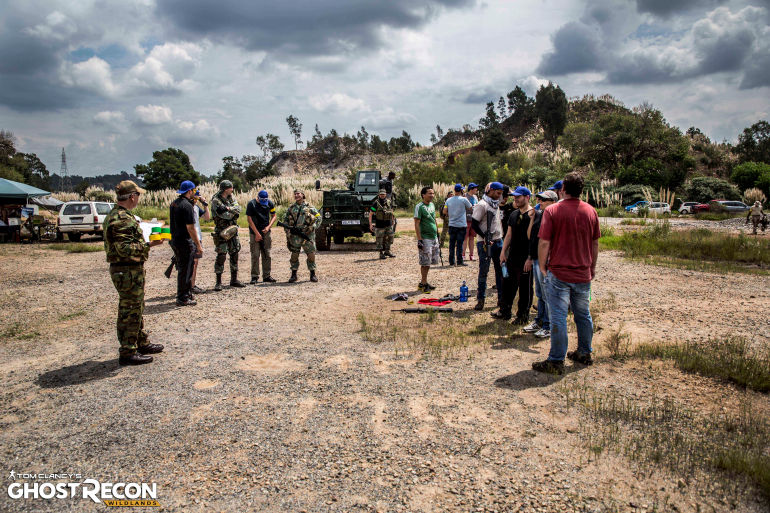 The teams were divided equally between the novice (the media and public) and airsoft veterans (some of whom had prior military experience). This meant that missions were carried out with precise, tactical planning beforehand where the aim was to think of it as you would a real-world situation. While many quickly abandoned said notion, I preferred making the most of the opportunity to mirror and actual military operation. As such, many of my maneuvers were performed in ultra-stealth mode, shooting only a few individuals (which were of less importance that the actual mission), and not having been shot during both sets of missions on the day.

Having spent in excess of six hours in the extremely hot, extremely treacherous surroundings I called it a day. The day’s events were extremely fun, and while there were quite a number of injuries, and many more scratches and bruises, there’s no doubting the fun had by all.

Thanks to Rene’ and Monnique from Megarom who arranged most of the day’s events, and to the airsoft team and others who put in a lot of effort to pull this event together.