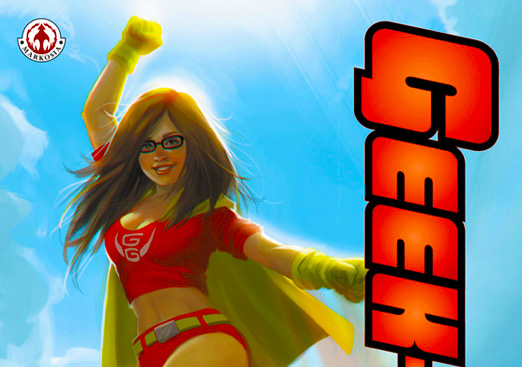 When college student Ruby Kaye wins a pair of glasses which give her amazing powers during a game of strip poker, she soon finds herself living the life of a superhero. As Geek Girl she’s soon got her hands full battling strange supervillains and realizes that it isn’t as easy as it looks. With her social life falling apart fast and her secret identity already known to too many people, the biggest lesson to be learned is that great power may mean great responsibility and a whole world of problems! Can Geek Girl learn the ropes fast enough to survive her new super powered lifestyle? There’s an awkward divide which separates real geeks from fake ones. For instance, despite the success of The Big Bang Theory, it’ll never have the same respect from geeks as The IT Crowd. Why? Because for all the clichés which both shows throw out at audiences, TBBT is the wish fulfilment fantasy which the mainstream seems to assume is what real geeks want. They intentionally name-drop comic books for the sake of “geek chic”, but they seem to have so little understanding of them that Sheldon’s classic issue of The Flash #123 is kept in a vault but hasn’t been CGC’d or even been given a backing board in its polybag.

Meanwhile, in The IT Crowd, Moss struggles to perfect an email to the fire department while the office is burning down around him, while Roy repeatedly advises everyone that the best way to fix a computer is to turn it off and on again. They’re obsessive, smart, and “standard nerds” (as the show dubs them) who don’t go out of their way to prove it.

With a title like Geek Girl, it would be easy to have Ruby be exactly what the name suggests. To its credit, she isn’t. She doesn’t name-drop Captain Kirk, quote Star Wars or wear superhero T-shirts to prove just how much of a geek she is… because she really isn’t. She’s one of the cool crowd, who’s fully aware of her status of being sexy. The only thing geeky about her are the glasses she has to wear when she’s a superhero, which makes for a fun inversion of the Clark Kent/Superman routine. In many ways, this series is a throwback to ‘90s titles like Gen-13 and Impact’s The Jaguar, which makes it fun but also suffers some of the drawbacks of those titles. For all the adventure and heroics, there’s also an obsession with eye candy and sexiness, with many of the characters having little depth to them other than stereotypical traits. The guys are morons obsessed with lesbianism (despite being smart enough to create the power-giving glasses), while the young women are focused on looking good, being mean to each other and addressing each other in crude ways which are meant to seem cool.

There’s also little time spent establishing the world they occupy. Clearly, superheroes exist as part of daily life, to the point where nobody seems amazed at all, but it would be interesting learning why. Even getting artificial superpowers seems normal, which makes some of the reactions of the characters come across as too matter-of-fact to be normal.

However, there’s a sense of fun in the writing and, with a little more polish, this series could be a real winner in the near future. The art is impressive too, although the pacing needs to slow down a little in some scenes to allow the story to progress more smoothly.

Geek Girl as a character may be a fake geek but acknowledges that and the honesty is refreshing. As a title, it’s genuine and may just gain a following as a sleeper hit and, certainly, deserves some attention. Geek-Girl: Vol.1: Lightning Strikes! is out Aug 25 and available at www.amazon.com and www.geekgirlcomics.com.