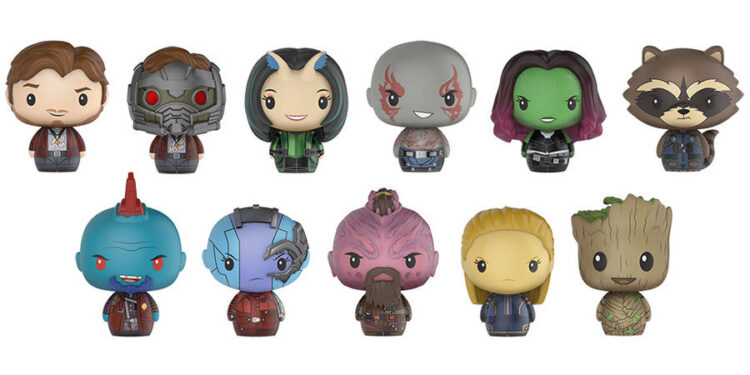 Funko – the company which has made bobbleheads cool again – have now brought their latest Batman and Guardians of the Galaxy “pint size” minifigures to toy stores. But are the Funko Pint Size Heroes any good? The answer is a resounding yes… but with a small catch or two. Standing at approximately the same height as a LEGO minifigure, the obvious drawback initially is that these don’t really have any moving parts other than the head. Since most people prefer having their figures facing forward or playing with them, there’s little point to this design feature. Also, while the heads are huge, the bodies are incredibly small. As such, they don’t provide much of a stable base to stand on and these things will fall over at the slightest little bump.

So given these drawbacks, you’ll be amazed to hear that these are absolute must-haves. As with so many things, it’s all about the details.

If you look at the small details which have gone into the designs of these figures – whether it be the various different expressions on each character’s face, to every individual question mark on the Riddler’s jacket – there’s some meticulous work going on. Unlike the Toyvend DC Super-Villain Buildable Figurines, which offer larger bobblehead figures but of cheaper hollow plastic and tend to have misprinted facial details, these offer real quality.

The range of figures adds to the collectable nature of them too. Yes, in the Batman set there are three costume versions (four if you include Batman Beyond), but each represents a very different era including Batman ’66. With Batgirl, Poison Ivy, Harley Quinn, The Penguin, the Riddler and more, they make for a great set. Meanwhile, the GotG figures may include three variant Baby Groots and four Star-Lords, but again there’s something unique with each. In the case of the Groots, even each different facial expression is perfect, whether he be fun-loving, distressed or downright surly… exactly how he is in the new film. Other characters naturally include Drax, Gamora and Rocket Raccoon, alongside Yondu, Nebula, Mantis, Ego and even Taserface. Sadly, no Kraglin this time but maybe soon…

Sadly the usual irritating “blind bag” rule applies with these just as they do with the LEGO minifigures – which may put you off buying them if you’re worried about getting multiples of the same figure. However, it does add to the surprise of not knowing what you’re getting and creates a challenge if you’re collecting them as a set. The reward definitely outweighs the risks.

Funko Pint Size Heroes are high-quality collectables, they look great and they take up little space. They’re also intensely cute and a whole lot of fun. In fact, just holding them is liable to put a smile on your face because they’re so darn adorable.

These may be Pint Size Heroes, but the joy of them is huge.