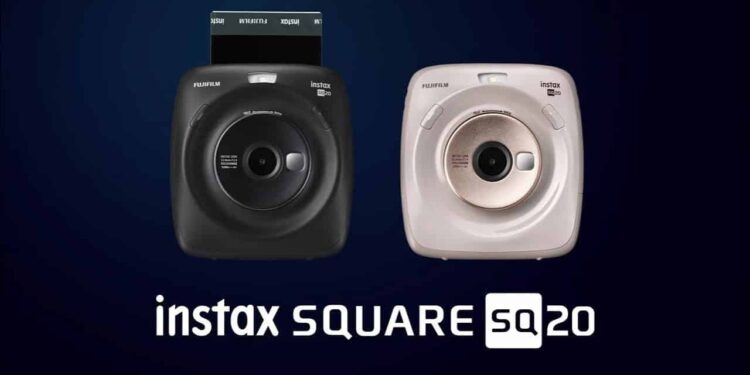 A short while back, Fujifilm introduced their latest version to the market, the Instax Square SQ20, an update of the SQ10. With a number of new features added to the device, Fujifilm aims to make this hybrid instant camera a must for all enthusiasts. 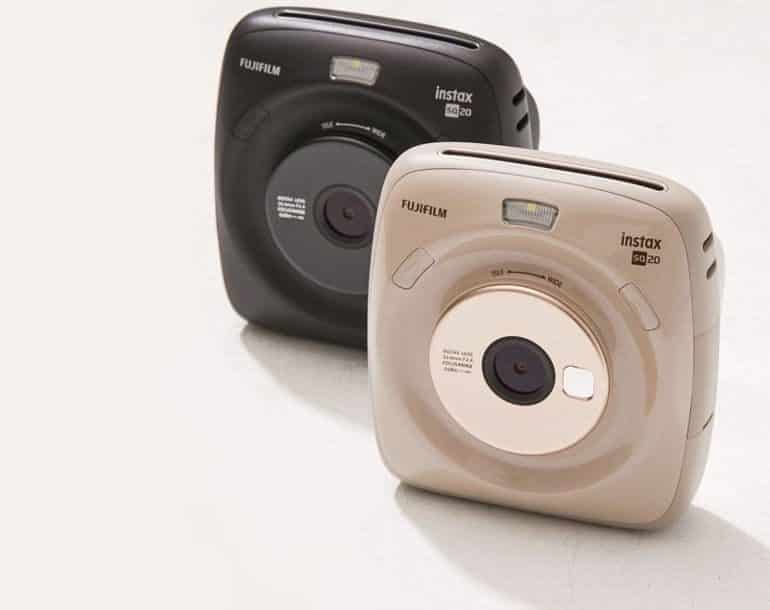 The instant camera has a very rich history, with Polaroid introducing its first version, the Land camera, back in 1947. Interestingly, there are quite a few original models of the various models of instant cameras through the 70+ years, with the likes of Polaroid Originals still manufacturing film for some of those cameras thanks to the recent rise of this type of instant photography in the past two to three years. While the name ‘Polaroid’ still remains largely synonymous with the instant camera, the likes of Lomography, Leica, Fujifilm and a few others have taken over most of the market.

As with all of the previous Instax range, the SQ20 is almost exclusively plastic. The team aren’t aiming to win any design awards here, instead of providing a functional unit that’s both robust while also keeping the costs down. The touch of glossiness of the plastic, as well as its lightweight nature at least, adds a bit of prestige to the unit, so it’s not completely a cheap plastic experience. The SQ20 comes in two colours, an all-black version and a beige one. Having received the beige unit for review, I was a little perplexed by the choice of colour or the theme the design team were going for, especially considering the range of awesome colours in the lower ranges.

Interestingly, if you compare the SQ20 side by side against the SQ10, you’ll notice the former is a bit less square. You wouldn’t notice this easily as the unit seems square enough, as the name would suggest that it is. Unlike on the SQ10, the shutter buttons on the SQ20 are shaped with the curvature of the front design. The twin buttons make it ideal for all users, whether you’re left or right-handed. A good design feature here is that one of the buttons can be customised to be a shortcut for another function, making it easier to make a quick change other than using the menu on the screen.

Speaking of the screen, the SQ20 has a 2.7” LCD display, which is controlled by means of a scroll wheel and some additional buttons for navigation. The scroll wheel allows you to quickly scroll through photos, effects and the likes, rather than clicking the button for each change. The screen itself is smaller and lower resolution than the SQ10 and is used to view the scene to take photos, as there’s no optical viewfinder on the unit, unlike many other Instax models. Another change on the design front is that the lens can be twisted to zoom in and out during a shoot. On the SQ10, this is used to turn the device on and off instead. There’s also a tiny mirror fitted to the lens allowing users to, more or less, line up their faces when taking selfies. 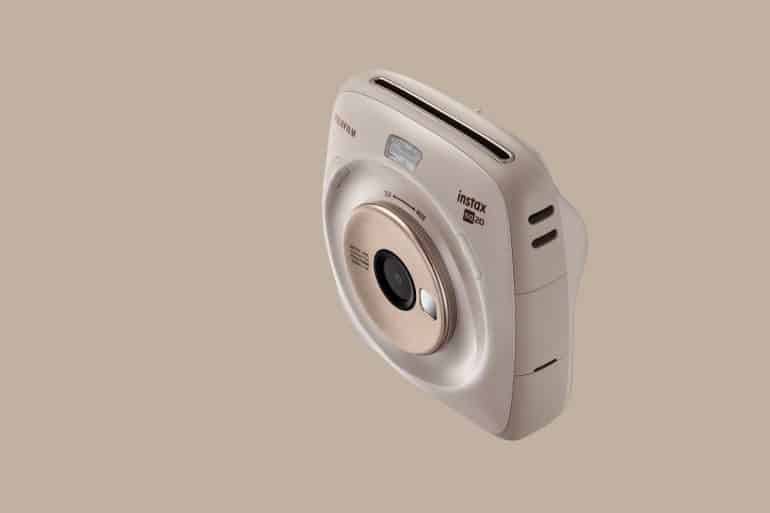 As mentioned in the introduction, there are a few new features added to the SQ20 to make it stand out from its predecessor. For starters, the unit has the capability to record short videos to create a motion image (or gif). The feature is called Motion Mode. While you can’t print a video (obviously), you can scroll through each of the frames to choose the best one to print. These bursts take footage across 15 seconds with up to 250 frames to then choose from.

The second new feature is the 4x digital zoom. I would’ve preferred a mix of optical and digital zoom, but the feature is reasonably useful. Users can also choose to zoom into a specific area when choosing a print, so you don’t necessarily have to zoom in on an area when taken.

Labelled as a hybrid instant camera, the SQ20 allows you to save your photos and motion clips and print the photos at a later stage, or once you’ve applied some editing and filters. It’s important to note here, however, that you’ll need a microSD card, as there won’t be sufficient space to store sufficient number or photos or clips on the built-in memory.

Speaking of editing, there are quite a number of useful filters, effects and the likes to use before hitting the print button. Features such as Time Shift Collage, Sequence Filter (motion blur), as well as Double Exposure, allowing you to capture an image and then position a second image to be taken over the original, blending the two into one. These are all pretty decent shooting modes when you want to mix it up a little.

A notable missing feature/s is wireless connectivity, whether it be Wi-Fi or Bluetooth. It would have been great to have a tie-in app or desktop software to allow for transfers to the SQ20 for prints from your devices. The lack of support for any wireless features in 2019 on any device will always draw some attention. You are able to connect to your desktop/laptop by means of the microUSB port, but that’s a tad old-fashioned in this day and age. 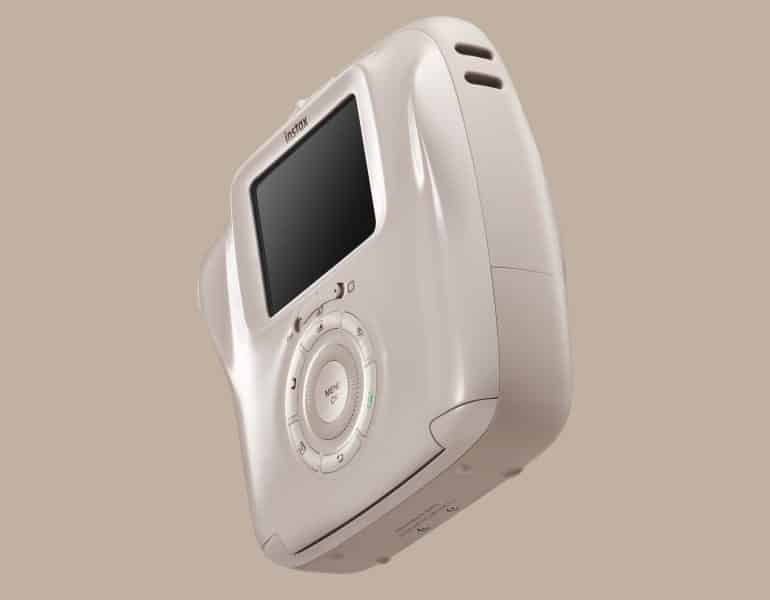 The performance of the Fujifilm Instax Square SQ20 is very good in comparison to many of the other units in the Instax range. The images produced are a bit bolder with better contrast than those other units. It’s worth noting that the images on-screen on the SQ20’s LCD look a lot more faded than when printed, so be careful when editing not to make images too dark. Speaking of printing, the unit averages between 10 and 12 seconds per photo, which is good too. A nice addition here is the animated printing feature which mimics the film being printed and released out the top. Each of the prints has a 1×1, square ratio to mimic that of the popular, modern social media posts.

Scrolling through the menu using the wheel is a breeze, much easier than the button method on the SQ10. With quite a few submenus to traverse, as well as the multiple filters to choose from, it’s actually a relief. The SQ20 has a fixed f/2.4 aperture with an ISO 100 sensitivity. These settings fluctuate, however, when the shutter speed change with the ISO being raised to up to ISO 1600. You cannot control these settings by means of a menu option. This means that image quality may vary significantly between shots even in similarly lit environments. In low light settings, expect some graininess on the photos taken. Thankfully, the unit does include a flash, which will greatly assist here. The SQ20 at times also deals with overexposure in images taken in brighter environments, but these are less of an issue than low light photography.

Another great addition to the Fujifilm Instax Square SQ20 is the inclusion on the rechargeable battery – not present in the SQ6 but available on the SQ10. The last thing anyone wants to do in this day and age is run out of battery during an outing and not having the capacity to recharge, instead requiring a specific type of battery to be replaced. The SQ20 has a non-removable Li-ion battery, which prints up to 100 photos per charge. In reality, you can expect roughly 40-50 prints with a large portion of the battery capacity being used to take photos, with further reductions with the use of the built-in flash. During the two-week testing period, I only required to charge the unit after said two weeks, having taken around 30 different shots, experimenting with filters, flash photography and motion images, along with about 20 prints. When charging, the unit takes over two hours to complete, which is quite a lengthy period, which makes on-the-fly charging via a portable battery, not the most convenient option. 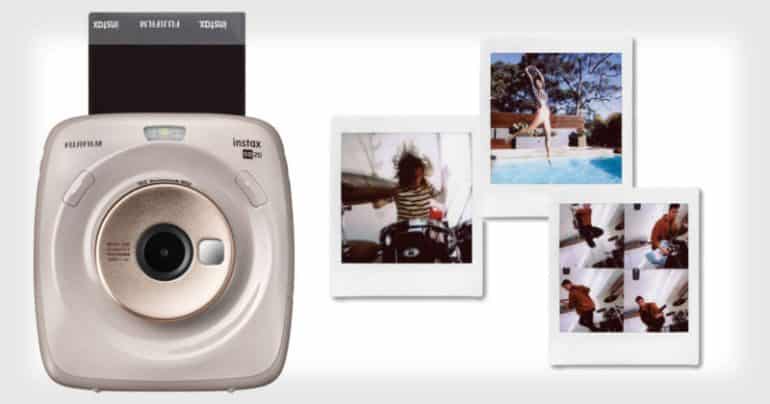 Whereas the SQ10 introduced the first iteration of the Instax hybrid camera, the Fujifilm Instax Square SQ20 introduced a host of features, including motion capture, digital zoom, as well as Instagram filters. It may still not be the complete product with a few of these additions being more gimmick than useful in the long run, but there’s quite a lot of potential still to be unearthed. Retailing at R2,999 the unit is quite a lot pricier compared to the base models but may save you on film, in the long run, being able to snap and store, then select which images to print at a later stage – with the option to create multiple prints of the same image also a nice bonus.

At its core, the SQ20 is a fairly standard digital camera. The built-in editing and application of filters, as well as being able to print images on the fly, is what makes this unit stand out.