Free Comic Book Day: Guardians of the Galaxy vs. The New 52 – Futures End

The two big guns were at it again this Free Comic Book Day, Marvel and DC squaring off with their best and looking to the future. Or, in DC’s case, the end of their future with their latest big event storyline. Marvel, in the meantime, was keen to increase awareness of the Guardians of the Galaxy to not only boost comic book sales but interest in the upcoming film. 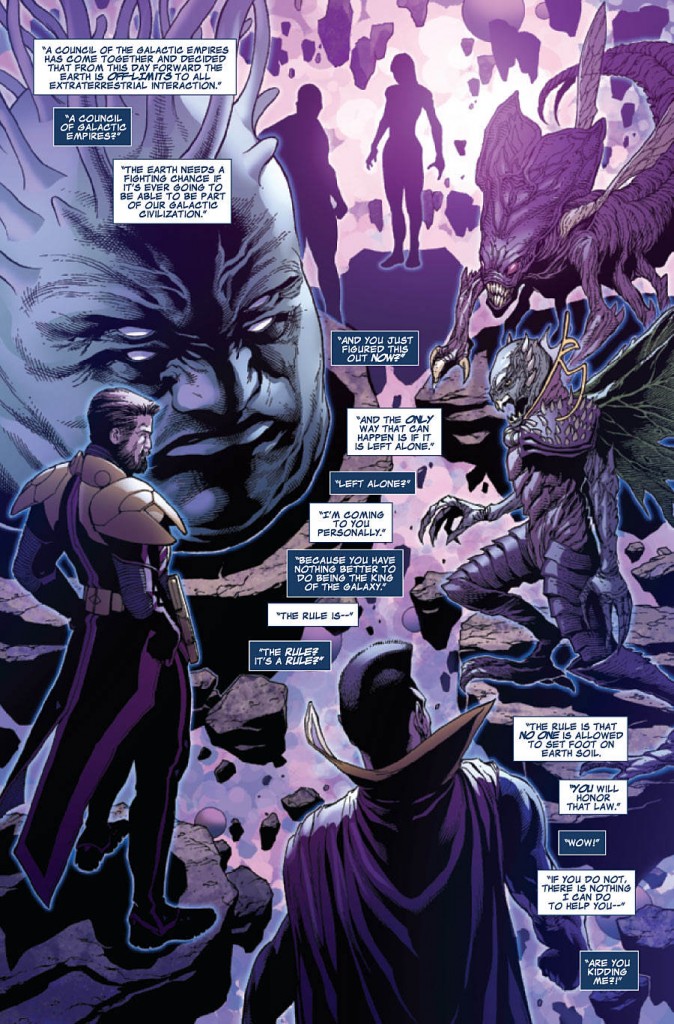 The Guardians of the Galaxy free comic book was an intersting little set of short story teasers, the first focusing on Tony Stark recruiting Flash Thompson into hooking up with the interstellar adventurers. It was a smart way of explaining who the characters are for new readers, and a good lead-in to an intriguing bigger story. The second focused on big bad guy (and Avengers movie post-credits shadowy ugly fellow) Thanos and what he’s up to at the moment.

There was a third tale in there too, a teaser for the upcoming Spider-Man story Spider-Verse. This actually looks like quite an intriguing storyline, and like the two GotG teasers had a sense of fun about it. The key to making these action-adventures work is knowing when to make them serious and when to ease up on them and add a dash of comedy. All of them succeeded at getting the balance right, and while I’m not sure if I’ll add them to my required reading list I’ve got to admit I’m tempted.

DC’s The New 52 – Futures End begins 35 years in the future, one where Batman’s old pesky artificial intelligence satellite Brother Eye has taken over. It’s a grim world where almost every superhero has basically been turned into an evil Borg from Star Trek, most of them with laser cannon arms and giant mechanical spider-legs. Frankenstein has had Black Canary’s head surgically implanted into his chest, and to make matters worse the Flash has grown an old-man beard that sticks out of his mask and looks dreadful.

Yes, it’s a grim future for the DC52U. Thankfully, an aging Bruce Wayne has a plan and it’s to send himself back in time to prevent all of this from happening. His young Batman apprentice Terry McGinnis just has to protect him long enough to activate his time portal device and get through. It all goes wrong though, and Bruce gets killed just moments before he can leave. It’s up to Terry to go, and is given just two pieces of advice: don’t contact Bruce in the past, and don’t get Superman involved. With just a jump to the left and a step to right, he does the time warp… and winds up in the wrong time, five years in our future where his grim future is already underway.

It’s good that Terry McGinnis is finally entering DC continuity properly, but what does this storyline hold in store for us? It’s kind of hard to tell, and will Terry actually be sticking around? Does the Batman family really need another extended relative? And doesn’t this story sound a little familiar? Wasn’t it DC’s Armageddon 2001, where an evil overlord ruled a future DCU and one hero went back in time to prevent evil events from unfolding? Hmm… maybe it was before that?

I could lie and say that it doesn’t remind me at all of the X-Men’s Days Of Future Past in any way. I know this is a big event and one of the most anticipated in comics at the moment. It’s got some amazing talent behind it and having Keith Giffen involved is always a good thing. The guy knows what he’s doing and is one of the most unsung legends in the business. This storyline could go either way though and we’ll have to see, but it’s been hinted that this could affect their alternate Earths.

Potential future/alternate reality storylines are tricky ones, because there’s always the lingering knowledge that not only is the chosen hero creating a paradox by sticking around but also that if they’re successful then every “shocking” moment in their wacky new world – whether it’s the X-Men being wiped out by sentinels, Magneto and Rogue having a kid, Monarch being the oppressive overlord of the DCU, Superman Prime in the 853rd century being moody, or this – well, they just don’t count in the long term. Reality gets rebooted and these things never happened. Still, they can be entertaining.

Both of these comics are signalling events that could be worth keeping an eye on. Futures End has a lot to live up to, but if it works it could be a gem. If it doesn’t, it could prove as irrelevant as the future of DC One Million is now. Here’s hoping it lives up to the hype. Also, there was a cool advert on the back cover for coloured hair gel, something we’ve all been wanting for years.

As for Guardians Of The Galaxy, it still has to win over those movie-goers who are unfamiliar with them, but this goes a long way and is a perfect promo for the comic books. It looks like this could indeed be the hottest property on the market right now, but there’s a lot riding on it. Meanwhile, the Spider-Verse looks like an unlikely – but highly likeable – series worth looking in on when it hits in November. The advert on the back of their comic was for another storyline, Original Sin, and while it isn’t coloured hair gel it looks good too.

Now if you’ll excuse me, I need to get back to my Murder Board and start figuring out who shot The Watcher. So far my money’s on Howard the Duck, but I’m sworn not to interfere with the investigation…