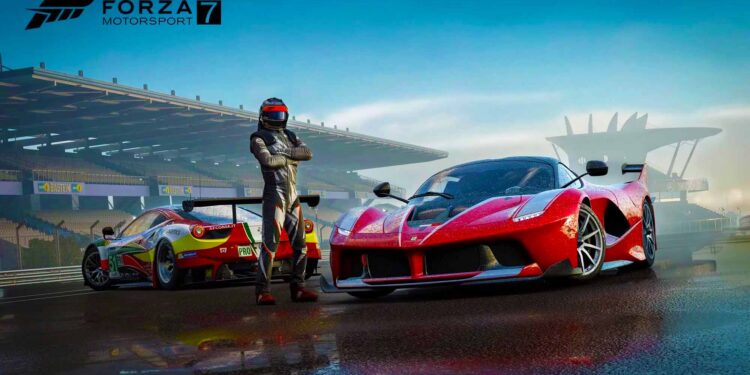 Having spent some time playing F1 2017, which is the best racing sim out there, hands down, I was dubious of having to write something positive about Forza Motorsport 7. Forza 6 was great. I enjoyed the gameplay. I felt the medal system was a step back from Forza 5, where you were rewarded for 1-3 position with Gold, Silver was 4 – 7 I think, and so. In 6 you got Gold for first, silver for 2nd and bronze for 3rd and, eventually, it just became a boring linear trek from one race to the next. Forza 7 has found, what I believe to be, the perfect middle ground. There are now 6 championships and within each are several series. For example, performance hatchbacks, pick-up trucks and Polaris racing buggys. Right from the get-go, you are told that to be the best a racer has to be fast, versatile and adaptable and this multiple series per championship really tests you.

The cars really do behave differently and respond differently to differing conditions and, somehow, clearly through voodoo, the track conditions change every lap, which means the cars behave differently every lap too. I found myself replaying tracks over and over again to see how far this alien intelligence built into the code of this game goes and it really is different every single lap. The implication is staggering… Anyhoo, this Formula 1-esque points scoring system is fantastic. Race wins are rewarded, but consistency is more important than ending up in the sticks because you try to win the race in the first corner. So the winner is decided by who has the most points at the end of the championship. If you win enough series in the championship, you get the trophy as well as unlocking the next championship. From this point on, things get a little confusing and frankly, a little gimmicky.

You need to grow your garage as well, which is not unusual, but cars are divided into tiers and each car you acquire, either through buying it from your winnings or getting it in the new “loot-crate” system. Collect enough cars in a tier and the next tier will be unlocked. The cars in these tiers are really fantastic, everything from 70’s muscle cars to classics like the Honda CR and Alpha Sud. Really nice attention to detail. And you get to race these beauties as well. You can obviously modify your cars to make them faster and more stable and they have maintained a limited amount of racing sim here in that you can set your car up by adjusting brake bias, tyre pressures and roll-bar stiffness, but it’s all rudimentary and, if I’m honest, doesn’t really work.

The championship progression in Forza Motorsport 7 should give the game massive replay potential and the sheer number of cars per tier mean you could spend many hundreds of hours collecting a garage to rival Jay Leno.

Back to the tier system, it makes it feel like you are actually building up to something, which is a big improvement on Forza 6. In fact, everything about the game, the new cars, the new championships and the new loot crates, all feel like everything you do matters.

Mods are back! If I’m honest, I don’t know how I feel about that. You win mods by achieving certain milestones or finding them in crates, and you get rewarded for either racing with a mod activated or turned off. What the hell??? I realised I know what the problem I have with this game is. Turn 10 has turned Gears of War 4 into a racing game, which is not surprising as they are both Xbox exclusives.

So what are the positives? It’s beautiful. The weather effects are super realistic, the way the sun reflects off a wet track, the hyper-real reflections off the bonnet of your car, it is a huge step forward from the previous instalment, which was no ugg-O to start with.

The sound effects are very convincing, and I suspect a lot of effort was spent on recording the actual cars at full chatter. Some of the races seemed too dark. Not when you are racing, but when you are lining up on the grid or making a modification during a night race. I couldn’t see what I was doing, but I think that could be because I’m playing on a standard Xbox. I suspect on a One Plus with HDR you would see exactly what you were doing and I’m pretty sure this game was designed with the One X in mind. I have had to really change my expectation of Forza Motorsport 7. It is not a sim. At least, it is a racing simulator in the same way that Gears of War is a war simulator. The game is far too forgiving, even with the assists turned off, and the setup tweaks actually don’t do anything. That said, this is not why Forza Motorsport 7 was made. It’s to motor racing what SSX was to snow-boarding, a beautiful flight of fancy.

Forza Motorsport 7 is not going to make my top 5 list, but will definitely be in my top 10 racers. If you want a game that rewards your fastidious research into what your suspension setup should be to get around Suzuka in the anti-clockwise configuration in the shortest possible time, this game is not for you. If you want the digital equivalent of cruising the boulevard with the top down and two honeyz in bikinis hanging all over you, Forza 7 is the game you are looking for.