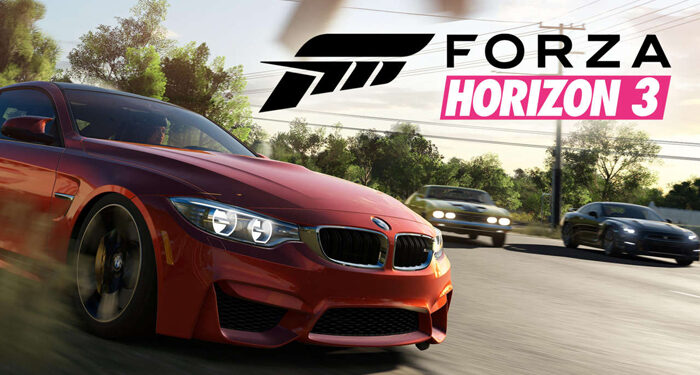 I may have mentioned before that I am a BIG fan of cars, racing and racing games..? Having recently played F1 2016, I thought I had hit Nerdvana, and I basically had nothing left to look forward to for the rest of the year. Then BAM! Playground Games releases Forza Horizon 3 and I get a shiny new box wrapped in plastic on my desk, screaming at me to fake illness and leave work immediately! Everything about this game is cool. The cover has a Ford F150 jumping a Lamborghini Centenario! I don’t care where you’re from, that is COOL!

You may have seen the teaser for it on the Fortress of Solitude website and, like me, have been counting down the days till you can get your greasy little hands on a copy. The wait is finally over!

Now before I continue gushing like a girl at her Matric Ball, let me get some of the official stuff out of the way. Playground Games have established themselves as the leaders in open-world racing games. I think anyone who plays racing games will agree, you get Forza, and then you get everything else, right? Even though, if I’m honest, the previous releases were “Open-World” and not REALLY Open-World. What I mean is, in Forza 2, you could go ALMOST everywhere. You could drive around the countryside and see everything, but you would still eventually hit a barrier or mountain range or something which you could not cross. In Forza 3 there is no such limitation (at least not that I have found yet). I haven’t had a chance to cover every square inch of the map yet, but I will, and my plan is to reach the mountains on the horizon, drive over them and ramp as far as I can into the sea!

It’s the little things in life… Forza has reached Australia, which I think is fitting as most people will behave like criminals when they get racing. This release is being touted as the most diverse, most social, and most customizable open-world racer in the business, which I think is quite a large claim. Not just that, it is also claiming to be twice as big as Horizon 2. It has twice the ecosystem types, which creates a whole bunch of new driving experiences. You can take your brand new Lamborghini down the beach and run all 4 wheels in the water, you will see the spray on your screen and the water drops will run upward as if being blown by the wind. You can tear through the muddy, twisty bush and go flying over the huge dunes in the Australian Outback. In a Lamborghini. At 170 miles per hour…

This may be one of the few gripes I have with this game is how illogical the physics is. I should not be able to hit 170mph on a sand dune in a Lamborghini! In its defence, I have been playing a lot of F1 2016, which is a spectacular racing simulator, and Forza is not. It’s balls-out racing that looks great and sounds great! So getting back to Playground Games’ claim about Forza being big, I’m going to say yes, we can expect more of everything.

More cars. A whole lot more cars! Horizon 2 shipped with 200, Forza Horizon 3 has 350! The car list is even more diverse than the environments, ranging from the newly-debuted Lamborghini Centenario to specialized Baja buggies like the Penhall Cholla, and just about everything in between. There are even some Australia-specific vehicles like the Holden Torana , the ’74 Holden Sandman and the final production pick-ups (or Utes, as the Australians call them) from both Holden (Chev, for those of us not living in Australia) and Ford. This is honestly gearhead heaven! These cars are all beautifully rendered. The driving experience is fantastic (not realistic). The cars look so amazing when tearing across the countryside, ploughing through fences and over carefully manicured lawns (I haven’t really mastered racing with a controller yet!). The environments are among the best I’ve seen in a car game; the way the shadows dance over shiny metal when racing through forests and the beautiful sky renderings.

More radio stations. This is one of the features I really like! You have always been able to choose a radio station so your demolition derby has a soundtrack. The default options are fairly limited, but you can now choose to use your own music! That’s right folks, Forza Horizon 3 will allow you to stream your own playlist from your Microsoft OneDrive account! In my opinion, this is a spectacular addition to an already fantastic offering.

More co-op. Playing with friends has also always been an option, but now you can co-op with friends playing on Xbox One or Windows 10. Pretty cool Microsoft! I have not played a co-op game yet, but according to the official release; “Everything in Forza Horizon 3’s solo campaign can be played in co-op, and everything earned and completed while in co-op will remain with you once you go back to solo play; you’ll never have to arbitrarily race the same event twice.” Nice!

More Control. In previous releases, you arrive at the Forza event and you race your way to the top, but in Horizon 3 there is a neat mode called Blueprint. In this mode you are the boss of the Horizon festival and, as such, you can fiddle with it as you desire. You have complete control over the whole event, from setting the routes, car restrictions, even the weather conditions! You can then share these with friends, who’ll see them in their own games. There is so much more detail, for example, once you have created your event, the game generates a custom poster/flyer of the event, and it’s generally not too crappy. These custom created events will give you the same rewards as the default ones, so theoretically, with 350 cars to race with, you could play this game forever.

More sexy! OK, this may be just me, but you get to choose an avatar to represent you, which you have to name because you have an assistant called Keira and she calls you by name, with an Irish accent… grrrrrrr…

If you are a fan of racing games, and you are wanting to spend the money, I highly recommend Forza Horizon 3. It is the game you have fallen in love with, just better. More of everything and virtually unlimited replay value, it will be money well spent. It is a visceral experience, loud and beautiful, and as complicated as you want it to be.