Flash Versus Zoomlander, Crazy Pills & The Man In The Iron Mask 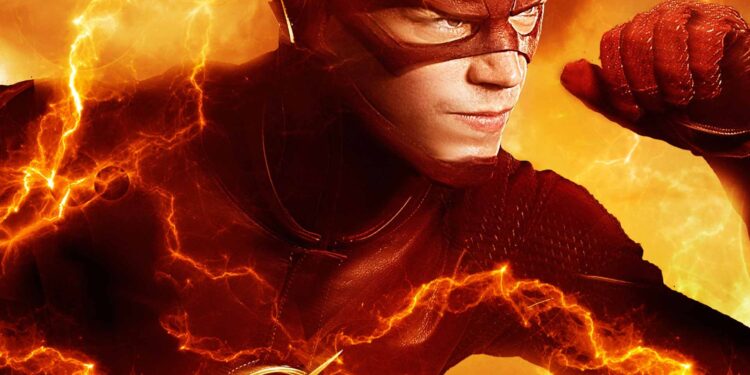 “But it’s just a TV show based on a comic book,” people say. “Don’t think too hard about it.” Of course, I’m ranting on about The Flash again. As if that explanation is supposed to clear the show of any wrongdoing regarding poor storytelling, weak scripts and plot holes so large they could swallow up a world. Every episode shows characters who are supposed to be smart but make dumb decisions, and I’m supposed to let it slide. Every week I hope that I’ll see the one great episode which can salvage this show, and instead every episode disappoints me. It lets me down regularly and I’m uncertain about watching season 3, simply because I just wish it were better. The Silver Age Flash, who celebrated his 60th anniversary this year, deserves the best too and he isn’t getting it on TV. But can it still turn the corner?

The Flash episode Versus Zoom made me feel like Mugatu in Zoolander, when he tried to point out how Derek Zoolander’s “different” facial expressions were all identical. I have to yell out “I FEEL LIKE I’M TAKING CRAZY PILLS!”

In that episode we found out that Jay Garrick is a future Earth-2 Hunter Zolomon who really wasn’t pretending to be Jay Garrick, since that was an earlier Hunter Zolomon who was doing it. It’s a bit like how Harrison Wells wasn’t really Harrison Wells because he was really Eobard Thawne… even though they still called him “Wells” even once they knew the truth. But Zoom/Zolomon technically wasn’t ever Jay, because that was his earlier self. Uh… okay. Sure, yes, Zolomon lost the hobo Santa look, but surely some journalist would have picked up on this. Or Zolomon’s doctors, or the police who presumably would have an APB out for this escaped madman, or even any of the family of Zolomon’s victims. But as Jay he seemed to be in the public eye quite a bit and nobody ever seemed to notice.

But getting back to that story…

Thankfully the Flash had just the plan to catch Zoom, leading him on a merry chase back to STAR Labs. The Flash’s cunning plan was to wave some cardboard cut-outs at Zoom and then stick him to the ground with an electronic boot (one which couldn’t even stop Atom Smasher at the start of the season). Once Zoom was down, Barry had a chat with him and, naturally, accidentally allowed him time to escape. All the while, Team Flash were hiding in a different room, armed but ready to help out in no way whatsoever. His plan failed. No surprises, since the kid from Home Alone could have come up with a better trap. Then there was the usual moping about as Barry knew that, not only had he let an unstoppable killer loose on Earth-1, but also that his actions led to Wally West getting kidnapped just like Eddie did in season 1. But because Wally is Joe’s son, nothing is more important than rescuing him. So in other words, ignore the fact that Zoom could now kill everyone else on the planet.

Plan B was then to make a trade, one where super-genius Caitlin Snow gasped when Zoom took his mask off despite already knowing who was under there. Before they made the trade though, Zolomon explained his grand plan. It seems that to fool them (and everyone else), he convinced his earlier self to pretend to be Jay Garrick and then kill him, just to confuse everyone.

So he killed his earlier self and yet he’s still alive? Oh wait, he’s a “time remnant” just like Eobard Thawne became. Suuuuure.

So basically what they’re saying is that if you’ve got the speed force on your side, it doesn’t matter if you get killed because you don’t die? Does anybody else see anything wrong with that explanation? Apparently it also means that timelines don’t really get altered much no matter what speedsters do, because things just seem to tick over as usual. Let’s look at when Eddie died, for instance. This was supposed to be a great sacrifice, and it stopped Eobard Thawne from existing. Except apparently it didn’t, despite Eobard disappearing because now he couldn’t have been born. Maybe someone should tell Iris that her beloved fiancee sacrificed himself for no reason whatsoever? That should make her happy.

The following week’s Flash proved to be a slight improvement – as long as you ignored how the one metahuman “villain” who genuinely had reason to come crashing into STAR Labs didn’t, preferring instead to magically appear on the least-driven road in Central City just as Harry Wells happened to be driving down it. A road so unused that a major accident could occur without anybody reporting it and not a single cop shows up to investigate it. Oh, and Harry could walk around in public with a gun strapped to his back, which nobody thought was weird. Even though he’s a gun-toting guy with the face of a criminal so notorious that even Wally West – a kid from another city! – could identify him at a glance.

Yet this week’s episode, Rupture, did some serious storytelling damage control. It was hardly the best episode by any standards, despite all the Fringe, Harry Potter and Princess Bride references. This week’s Z-list villain was so useless that a bunch of disenfranchised cops managed to defeat him with a couple of tasers. Lame. However, despite that and yet more dumb decisions from the characters, it played a really, really smart game of bait-and-switch which suddenly made me hold out hope.

Viewers and fans have all been waiting for Wally West and Jesse Quick to get their speedster powers. In fact, for a show which has become about family, the Flash Family has been somewhat absent. Especially since Jay Garrick, a much-beloved character, turned out to be a fraud. So it’s no surprises that finally Wally and Jesse were locked away together and got hit with excess speed force energy.

It was a neat, if predictable, way to jump-start their powers. Yet that wasn’t the real kicker. The other was Barry’s dad, Henry Allen, coming back just to remind viewers that he’s still out there, alive and well. Then he dropped the major hint that his mom’s maiden name was Garrick. Since before the show even aired, I was crusading for John Wesley Shipp to play Jay Garrick, both as a nice homage to his time as the previous TV Flash and also because he’s now an older actor who conveys the father-figure image that Jay has in the comics. When he was cast as Henry Allen, I felt pretty disappointed. Yet now…

Am I the only person who thinks Henry Allen will die, only for the masked man on Earth-2 to be revealed as the real Jay Garrick – the Henry Allen of their world, who Hunter Zolomon took the name Garrick from?

If so, in one swift stroke they can give the fans the Jay Garrick everyone’s been wanting so desperately. It means they can also do what they should have done from the very beginning, which is to have John Wesley Shipp as a semi-regular Jay/Flash/father figure. Yes, it means all the drama of poor old Henry Allen dying, but since he never added anything to the plot and was bussed out of town the moment he left jail, is it any great loss? Not if it means we can get the proper Jay Garrick.

And that would be getting the show right.

So suddenly this show seems to have had a wake-up call, as if it’s decided to stop spoon-feeding the audience mumbo-jumbo and just put on a show that works. There are still a lot of problems, more than even my massive rants can address… yet for the first time in ages I’m holding out hope that they can fix things up, making it a show I’ll be enthusiastic to watch. With just a couple of episodes left to go in the season, here’s hoping they finally make that one great episode I need.