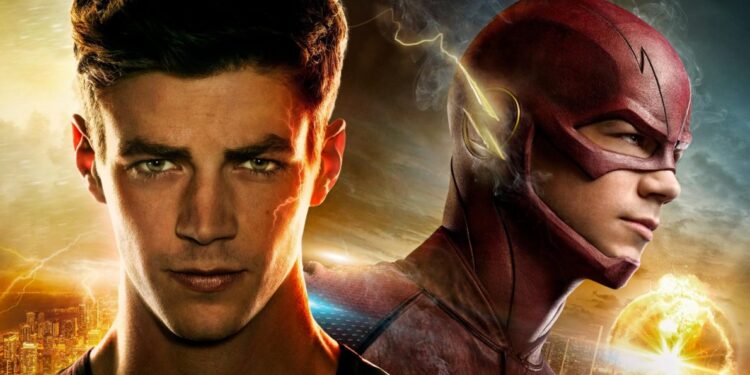 They had one job to do, just one job: to make The Flash a good TV show. And yet they couldn’t even do that.

After the penultimate episode Invincible, I really thought this show may have turned a corner. It wasn’t perfect, but it was promising. I’ve said before that I just needed one good, solid episode to make this show work, and that episode came so close to convincing me that I should give season 3 a shot. Yet with the season finale, The Race Of His Life, this show took whatever goodwill they gained and flushed it down the toilet – which is where this episode belongs. Following the not-really-shocking events of the previous episode, Barry chases down Zoom to avenge the murder of his father moments before. However, Zoom has created another of those silly “time remnants” for no good reason, and nothing much comes of it other than Zoom escaping. Again. However, Zoom has a challenge for Earth-1’s self-proclaimed “fastest man alive” – he wants to settle it all by having a race.

[pullquote]After powering up the multiverse-destroying machine, Barry creates his own “time remnant” to then stop the machine which he’s now activated while he fights Zoom.[/pullquote]

That sounds both very Silver Age and highly illogical. Like a magician pulling a rabbit out of a hat, Harry announces that Zoom’s actual plan is to use the energy from the race to power a machine which can destroy the multiverse. Obviously, with an infinite number of parallel Earths and countless trillions about to perish if the Flash accepts this challenge… he decides to do it anyway. Why? Well, because he think he can win the race, and that’s the important thing.

After the usual time-wasting nonsense of Team Flash locking Barry up for everyone’s own good and confronting Zoom themselves, Barry gives them all a pathetic passive-aggressive speech about decisions which were made without him – even though he’s making decisions without their agreement too. Predictably, he races against Zoom (in a giant hamster wheel, no less!) and…

Okay. This is where a shaky season falls apart completely. After powering up the multiverse-destroying machine, Barry creates his own “time remnant” to then stop the machine which he’s now activated while he fights Zoom. Not only that, but he then magically summons those pesky Black Flash-alike Time Wraiths to kill Zoom, simply because he doesn’t want to get his hands dirty. “Time remnant” Barry dies in a scene straight out of Crisis on Infinite Earth, and that’s it.

Oh wait, then they pull the big reveal that Earth-3’s Henry Allen – Jay Garrick – was the man in the iron mask. Jay suits up (in a better, brighter costume than anyone else on the show has) and then promptly leaves for another Earth. Along with Harry and Jesse. [pullquote]Why didn’t Barry create another “time remnant” earlier, or many, so they could tag-team against Zoom rather than powering up such a powerful weapon for him?[/pullquote]

This episode was bad. Actually, it was more than bad, it was weak and a complete let-down. Yes, there are the usual stupid choices made by supposedly smart characters, only here it was taken to the extreme. But then, what do you expect when the show seems to be making things up as they go. Try these for size…

Zoom creates a “time remnant” at the start of the episode, but why? He also builds a giant hamster wheel, but nobody noticed? Why exactly did Mercury Labs create a machine capable of destroying the multiverse? Why wasn’t Tina McGee there to explain it? How dumb was Team Flash’s plan to trap Zoom back on Earth-2, when Zoom was able to freely travel between parallel Earths? If the wraiths were targeting Zoom all along, why did we never see them attack him before? Why didn’t Zoom just use another “time remnant” to help him power up the hamster wheel? Why didn’t Barry create another “time remnant” earlier, or many, so they could tag-team against Zoom rather than powering up such a powerful weapon for him?

And that’s just the start. Meanwhile, questions from throughout the season which could have been important – such as why the Earth-2 doppelgangers had to kill their Earth-1 counterparts, how Zoom knew about Mercury Labs’ WMD (weapon of multiverse destruction), just what was it Zoom needed from the real Jay Garrick, how he created Velocity-9 on Earth-2, why nobody from there recognized him, why Patty Spivot never reported seeing (and shooting) Harry Wells, whether Wally and Jesse had gained super speed and so many others – were all swept under the rug.

“You know what? We’ll just forget about it,” Wally West says as Team Flash try to explain away the complete lack of common sense and logic in the show with some vague reasoning. And with that, all the questions are answered. Except they weren’t. And once again, the so-called fan explanation of saying that this is based on a comic book so it isn’t supposed to make sense doesn’t work either. That answer implies that comic books (and their readers) are dumb, and will accept any made-up answer. No. Comic books have their own internal logic sometimes, but they have to make sense and there’s no excuse for poor storytelling. In the final scene, we have Barry going a little cray-cray, thinking that the universe owes him a favour so it’s alright for him to negate last season’s finale and save his mom. “You’ve lost a lot in your life, Barry,” Iris tells him. “More than most.”

Has he? What did he lose, exactly? His mom died. He’s had years to deal with the death of his mom, plus the chance to go back in time to save her, plus a chat with the speed force itself to accept that. Now his dad died. This is the man who was locked up for most of Barry’s life, and even once freed the first thing he did was to leave Barry. I’m not saying that these events weren’t tragic, but lots of people’s parents die. What has he lost that others haven’t?

Is this show trying to get itself cancelled?

I’d love to see a Red Dwarf-style comedy scene of his final moments here. Season 2 Finale Barry saves his mom as Season 1 Finale Barry watches while Mid-Season 1 Barry fights Reverse-Flash outside. Then Season 3 Barry steps out from the kitchen eating a pie. A pair of Season 4 Barrys emerge from the bathroom and a dozen Season 5 Barrys enter through the back door. Then one of them says, “Okay, this is where it starts to get complicated…”

Is this show trying to get itself cancelled? It must be, presumably to clear the decks for the Flash movie, because it’s the only reason why a show that should be excellent churns out such poor storytelling. They even wasted a pivotal scene from the legendary Crisis comic books on a situation which could have been resolved in a far more spectacular fashion.

Well, that’s it. I’m pretty much done with this show. I’m sure that one less viewer won’t hurt them, but then they seem to be doing a good enough job of that by themselves. Oh, and in case you’re wondering why I’m giving this a C- instead of a far worse mark, it’s because I’m a sucker. Just seeing a proper Jay Garrick wearing a bright red costume and tipping his helmet, that’s the one thing this show got right and that I loved.