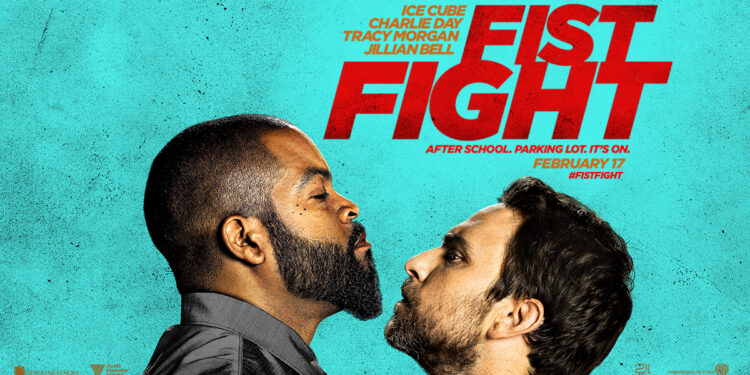 Bullying isn’t funny. Not today, tomorrow or the day after that. The creators of Fist Fight thought different. But even if you set that aside, it’s still not funny. At all. Oxford describes ‘comedy’ as professional entertainment consisting of jokes and sketches, intended to make an audience laugh. Fist Fight fails on all fronts to live up to that description. Instead, it offers a nails-on-the-chalkboard painful film that feels tedious after just five minutes. There’s a wild storm of comic clichés present and none of them really make any sense. In fact, it’s not unlike the rampaging horse on meth in the film: loud, noisy, crazy and running in all the wrong directions.

Charlie Day plays a panicky, nebbish English teacher, Mr Campbell, faced with possible retrenchment on senior prank day. While the school is running rampant with stupid pranks (which include a lot of penis images), Campbell is challenged to a fight by the school’s history teacher, Mr Strickand (Ice Cube), after he rats him out for destroying a student’s desk with an axe. Of course, Campbell tries everything in his power to avoid the fight, but every effort he makes to prevent it only makes things worse.

With a deadly stare and an uncontrollable anger problem, Strickand is typical of every character Ice Cube has played thus far. Day’s noisy, over-the-top performance (think Woody Allen on meth) is so irritating that you actually look forward to the beating. When you couple that with bad slapstick, profanity and the bizarre premise, you’re looking at 90 minutes of agony.