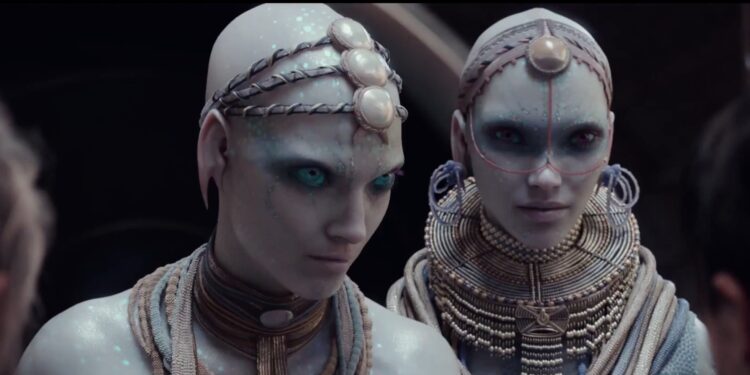 The final trailer for Luc Besson’s new sci-fi adventure, Valerian And The City Of A Thousand Planets, has arrived. And again, it looks amazing.

Valerian features over 200 different alien species. One look at the trailer and it clearly shows. This is a huge world filled with creatures, spaceships, strange planets and breath-taking space scenery. It’s become the most expensive film in French history, and it’s easy to see why. Nearly every frame is filled with eye-popping visuals from the various worlds.

If you’re humming along to the familiar tune played on piano and strings, you might recognise it from Stevie Wonder’s ‘Pastime Paradise’ or Coolio’s ‘Gangsta’s Paradise’. Based on the beloved Valerian and Laureline French graphic novels, considered ancestors of Star Wars and Avatar, Luc Besson’s Valerian and the City of a Thousand Planets stars Dane DeHaan and Cara Delevingne as the duo of time-traveling agents named Valerian and Laureline who go on various adventures throughout the galaxy together. Written and directed by Luc Besson (La Femme Nikita, The Professional, The Fifth Element, and Lucy) and produced by Virginie Besson-Silla, Valerian and the City of a Thousand Planets also stars Rihanna, Ethan Hawke, John Goodman, Herbie Hancock and Kris Wu.

Valerian (Dane DeHaan) and Laureline (Cara Delevingne) are special operatives for the government of the human territories charged with maintaining order throughout the universe. Valerian has more in mind than a professional relationship with his partner- blatantly chasing after her with propositions of romance. But his extensive history with women, and her traditional values, drive Laureline to continuously rebuff him. Under a directive from their Commander (Clive Owen), Valerian and Laureline embark on a mission to the breathtaking intergalactic city of Alpha, an ever-expanding metropolis comprised of thousands of different species from all four corners of the universe. Alpha’s seventeen million inhabitants have converged over time- uniting their talents, technology and resources for the betterment of all. Unfortunately, not everyone on Alpha shares in these same objectives; in fact, unseen forces are at work, placing our race in great danger.

Valerian and the City of a Thousand Planets releases in South African cinemas on 21st of July 2017.