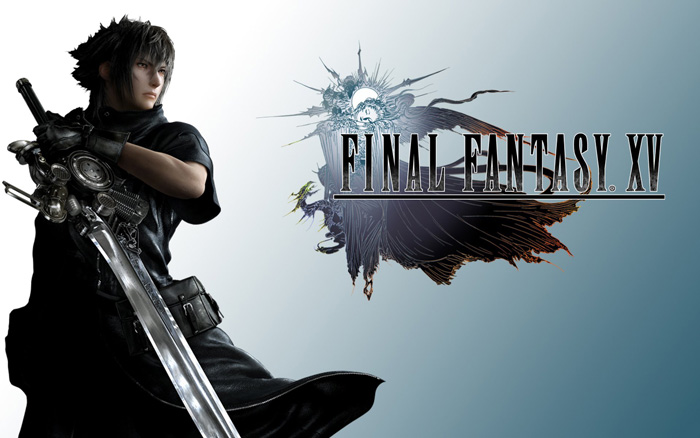 Ever since I can remember there has been one constant throughout my life as a gamer. A constant that has seen me travel to strange and distant worlds, fighting unimaginable evils and summoning powerful beings to fight alongside me. The Final Fantasy series has been a staple of my gaming life ever since I picked up my first controller and, even though the series has gone through a rough period lately, I have always had the hope that somewhere, somehow there will be another Final Fantasy game that will consume my life. 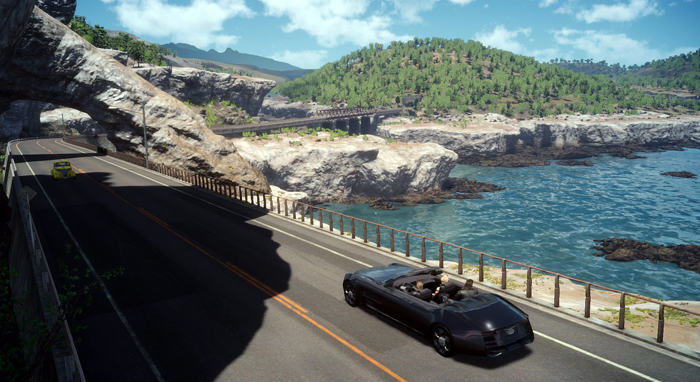 My hopes were bolstered when Final Fantasy Versus XIII was announced more than 10 years ago, but much in the same way that the game eventually morphed into Final Fantasy XV so too did its mechanics. At its core the game still retains much of what makes a Final Fantasy game special, it’s all now just wrapped up in a shiny new package.

In true Final Fantasy style, the story still features its fair share of confusing narrative, strange and powerful crystals, heroes with breathtakingly good hairstyles and of course Chocobos. But what stood out to me in Final Fantasy XV is that it puts more emphasis on the little moments, and even though there is a much larger narrative at play I found myself becoming lost in these, sometimes quiet, small moments that I experience during my play through. 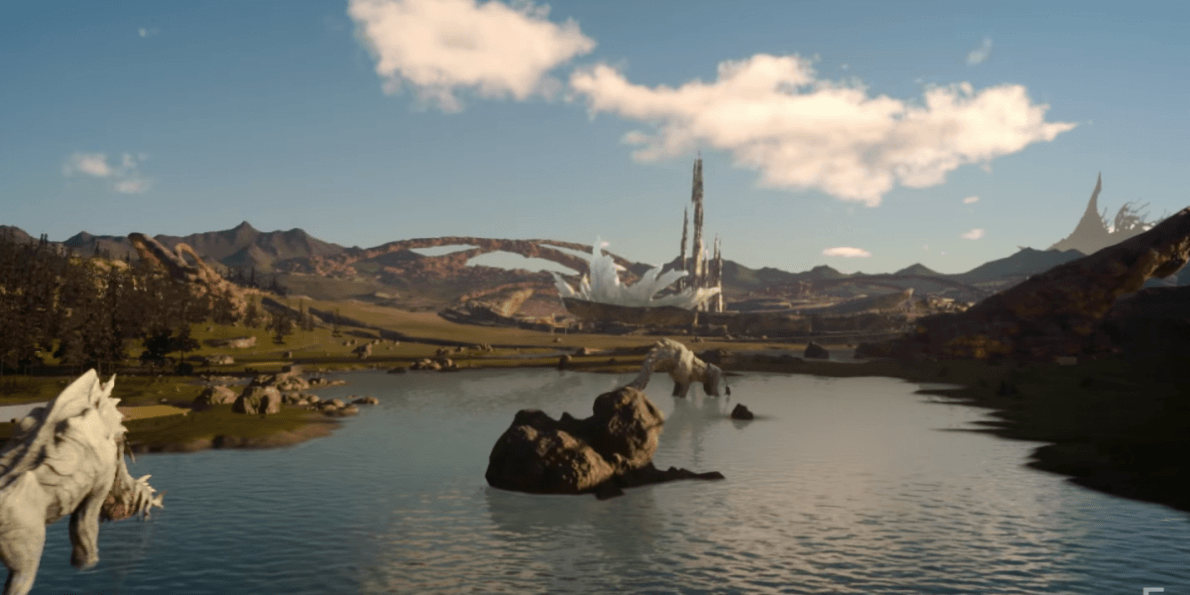 You see at its core Final Fantasy XV is more about a group of friends going on a road trip, enduring hardships, and learning more about each other and themselves along the way. Noctis’ group of friends consist of some classic stereotypes. There’s Prompto who has an almost child-like excitement for anything and everything, the tough as nails Gladiolus, and the wise and level headed Ignis. Although they tend to fall into some really stereotypical categories I still found each endearing in their own unique way. Right from the start players are dropped in a wide open world, ripe for exploring. It’s quite difficult not to get lost (and distracted) in the world that the game so successfully creates. The real world meets Final Fantasy art direction works perfectly, as many elements feel familiar yet different enough to seem interesting. Random quests pop up across the map along with mining areas, harvesting patches, and the obligatory treasure chests. Quests, as can be expected, consists mainly going there, killing this, getting that (over and over again). What motivated me to complete these were the rewards that you gain afterward. These could take the form of a cool new upgrade for the groups awesome looking car the Regalia (so you can pimp your ride), unique items or even a new mechanic that gets unlocked (such as Chocobos). These are all fun and engaging (most of the time) but my favorite by far are the hunting quests. Now even though these might seem like a classic go there kill X amount of those horned things (which it is) what made these so enjoyable is that every so often Noctis and the gang will be tasked with taking down a particularly large creature. These hunts feel less like a “kill that chore” thanks to the obvious inspiration from a certain Japanese monster hunting game (psst.. it’s Monster Hunter). Not only are some of these beasts huuuge and look thoroughly intimidating, but they put up quite a fight and make for a fun challenge.

Getting to these side quests is a joy as players are able to either fast travel (for a nominal fee), drive themselves, have Ignis drive (giving you time to enjoy the views) or my personal favorite, via your own customizable Chocobo. While fast traveling is a more efficient way to travel, I did find myself preferring to either drive or ride my loyal Chocobo Mr. Featherbottom. 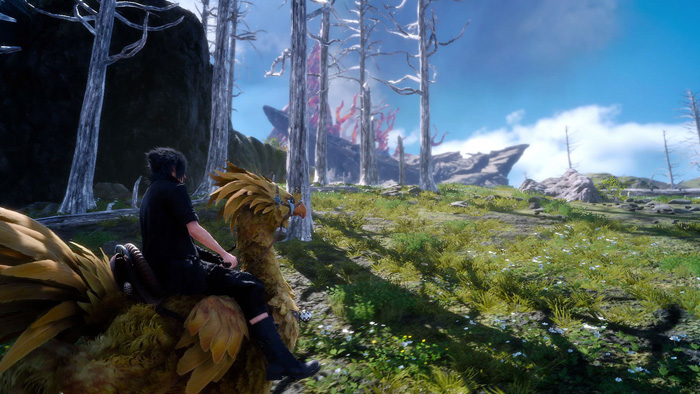 Now obviously what has stood out like a sore thumb to most Final Fantasy fans is the real-time action based combat and, while I love the classic turn based combat just as much as any other Final Fantasy fan, I found myself actually enjoying the fast paced more free form combat of Final Fantasy XV. Having a more action orientated combat system doesn’t mean that teamwork is now a thing of the past, on the contrary, even though I found myself doing most of the grunt work there were moments where my bacon was saved by one of my pals. Teamwork really becomes an essential part of combat. Each of Noctis’ three companions has special abilities that players are able to use during combat. These come in quite handy when the proverbial crap hits the fan. Another element that made the combat such a joy for me is the way in which Noctis is able to warp across the battlefield attacking an enemy and quickly retreating to safety. There were a few battles where it became necessary for me to master Noctis’ warp ability if I was to survive, and luckily it is not that difficult to get the hang of. One thing that bothered me about the new combat system tough is how summons have now been implemented. Previously if you had the mana reserves you could experience the grandeur of your summons anytime you pleased. Final Fantasy XV mixes things up a bit by only allowing summons to take place under specific circumstances. I’m not going to lie, it’s a little disappointing not being able to use your summons when you please, especially when facing a very tough opponent. Final Fantasy XV is a site to behold. Its open world is filled with great vistas, from desolate deserts to wet steaming jungles, each area is beautifully recreated with an attention to detail that makes each area feel unique. Strange Gigantic mountain ranges beckon you to go explore them. Terrifying and weird creatures dare you to hunt them down. The evenings can be just as visually stunning as the day time, that is if you are willing to venture out and possibly be ambushed by the Daemons. As with most open world games, one can expect some bugs to pop up every now and then (and not the type Noctis and Co. can slay). There were a few occasions were the world’s stunning beauty was tainted by a graphical glitch or two. There was even a bug that had a quest related enemy disappear forcing me to reload from a previous save point. The thing is that even though this could be frustrating I enjoyed playing the game so much that the odd occasion when this did happen I wasn’t too bothered. Composer Yoko Shinomura’s soundtrack adds an amazing amount to the game. Driving around Eos and hearing a nostalgic Final Fantasy theme playing on the radio just gets me all tingly. The way in which each epic moment is made even more awe-inspiring by the thunderous piano and choir song gave me goosebumps. It really adds to the weight one feels rests on Noctis’ (and your) shoulders.

I need to mention though that I wasn’t a big fan of the “I’m barely wearing anything” style of most of the female characters (here’s looking at you, Cindy). Seriously how warm must it be outside for her to wear so little clothing (especially since Noctis and the gang are out and about in full on leather)? 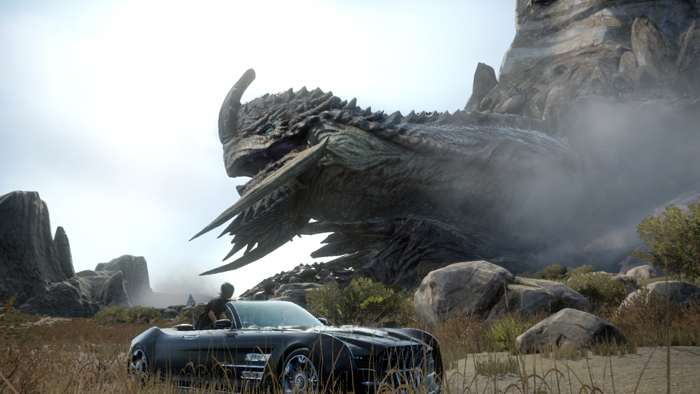 In the end, I did have a few small gripes with Final Fantasy XV, the occasional glitches and bugs, the new summoning system, and sometimes convoluted story does let down what is a great new evolution of the Final Fantasy franchise. Not only has it been quite some time since I’ve been so enamored by a Final Fantasy game, but I’ve also found myself really excited for what the future of the franchise hold. The tale of four friends taking on life and everything that it has to throw at them (including some big ass monsters) is one that will stay with me for quite some time. As the end credits rolled (along with some tears down my cheek), I realized that Final Fantasy XV truly is as it states when the game boots up “A Final Fantasy for fans and first timers”.