Final Fantasy XII: The Zodiac Age is an updated re-release of that original title, and after clocking in about 120 hours over the last two weeks, I must say, I can finally say with certainty that not only is FFXII a hidden gem for the franchise, it blows most recent games out of the water too.

In all fairness, I should admit up front that Final Fantasy as a franchise fulfilled about 60% of my childhood escapism. The fantastical worlds and epic story-lines enthralled me for up to a hundred hours per game, and it was an opportunity to truly lose myself in a virtual world. In 2006, Final Fantasy XII was released. I played it for about five hours before losing interest. This was a shocking break from the norm, and I was later to learn that I was far from the only fan to feel this way. It was by no means a bad game, just… different and different in a way that was hard to quantify or explain fully, although I shall attempt to do so here. Final Fantasy XII: The Zodiac Age’s basic plot outline is pretty standard for the franchise when just skimmed over: the central character is Vaan, an orphan street thief living in the desert city of Rabanastre, which is part of the recently conquered nation of Dalmasca. The invading Imperial force, Archadia, is expanding outwards, conquering territories, and is slowly approaching the other great imperial power of Rozarria. Vaan accidentally finds himself in the midst of this conflict when he breaks into the palace to try and steal something valuable, and ends up fleeing for his life with a collection of disparate rebels. So far, so average. Teen heroes and evil empires abound. Perhaps where this title started to lose more people was that the start of the game throws an enormous amount of characters and terminology at the player to understand. Final Fantasy XII: The Zodiac Age is highly political, with the nations and empires resembling the Cold War in many ways, with there even being a nuclear weapon analogy present past a certain point. Final Fantasy XII: The Zodiac Age also lacks a very central character: although Vaan is the point of view figure at all times, the other five members of the team ultimately have far more relevance to the events that are occurring, and Vaan provides the outsider perspective for the audience to appreciate.

The results of this, I found in this playthrough, is that the characters and political situations end up being far more mature and realistic than other FF titles. Think Game of Thrones, when it comes to the forces trying to outwit each other through clever manoeuvres. Much of the game is appreciated even more on a second playthrough when you understand what certain characters are aiming to do, and their plans seem even more cunning. Various moral questions are raised throughout the narrative and are often brought up rather subtlety, as opposed to bashing the player over the head with an obvious lesson to be learned. Although one weakness of the plot comes in the second act, where various fetch quests that ultimately lead nowhere form the bulk of the plot, the conclusion and the way the themes are ultimately concluded more than make up for this slight wobble. I will admit, however, that understanding the motivations of many of the characters and villains, in the end, requires careful attention to all their dialogue at all times, which I appreciate, as it adds to their complexity. Everyone feels real and believable as people in the story.

As opposed to the Final Fantasy games that came before this, Final Fantasy XII: The Zodiac Age was distinct for presenting one fluid field screen to travel on, where you would encounter enemies to battle in real time, as opposed to going to a separate battle screen. Battles happen in real time, and the beasts you encounter feel like part of a stable ecosystem. Three characters of your six can be on the field at one time and can be switched out at any point with the reserves, provided that you aren’t currently being targeted. Commands and instructions can be given to your characters as needed, but the main way to set them up is to use the Gambit system. Gambits are basically macros that you can design yourself. For instance, a Gambit saying that Vaan must attack all flying enemies with a lightning spell can be set, and he will merrily zap away when you see one coming towards you. The gambit system is intuitive and provides hours of experimentation to master, especially with the later content. You cannot just set them and expect the game to play itself, as there are thousands of variables that could affect your progress. Spells, abilities, and weapons are found or bought or crafted, but can only be equipped using the license board. As you battle enemies, your characters will earn License Points, which are used to purchase the ability to use certain spells or weapons. These also include passive skills or bonuses. So you might own a powerful Ice spell, but only the characters who own the license can use it. There are a wealth of spells and abilities, divided into multiple spell types like Black Magic, White Magic, and Time Magic. There is also an enormous assortment of weapons and armour types, spanning some 15 different classes of weapons, such as hammers, swords, rods, bows, guns, and spears. These weapons all behave in different ways, such as Katanas having a higher combo chance, and Bows being able to hit flying creatures.

So far, all that I have mentioned is meant for someone new to this game to read. For people returning to this re-release since 2006, here is what has changed – the main license board has been replaced with the 12 Zodiac Jobs. Each of the 6 characters has the choice of two Jobs, which essentially means they get streamed into a certain role. Later in the game, the second class can be chosen. You are allowed to double up Jobs, so if you want you can have an army of 6 Black Mages, but at the same time, the breakdown means that you can have all 12 jobs represented if you plan out your characters properly. This is a vast improvement on the original, as each character ends up fulfilling a certain party role, and remains valuable. New items and weapons are present, and a greater sense of balance has been introduced, in the sense that spells and weapon placements have been improved. There is an ability to overlay the main map over your screen, so you can keep track of where you can go next at all times. For those tedious grinding moments, a click of L1 can make the game run at 2x or 4x speed, which is a godsend, let me tell you. The game AutoSaves when you enter a new room, so you are far less frustrated when you wipe suddenly to a new enemy and have to retry. There is a trial mode, consisting of 100 levels of combat, which can provide weapons and spell rewards to the player too, and give them an opportunity to try out their super fancy weapons once all the main game enemies are dead. You can also unlock an Easy New Game Plus mode, which starts you at level 90, and a Hard New Game Plus mode, which blocks you from ever levelling and tests your skill. Aside from the usual graphical updates, which are good to see, as the game looks very crisp for a 2006 title, the soundtrack has been re-recorded by a live orchestra. You are also given the choice between English and Japanese voice acting.

Some of these changes may sound superficial, but they largely function to fix small annoyances from the original release that built over time. There can be a lot of grinding in this game at times for sidequests, and these new features largely reduce those completely. In many ways, the entire experience is smoothed and perfected, and you remain engrossed at all times.

The game has an enormous amount of content, with the original release material plus the new modes counted together. When I got to the point just before the final boss where the remaining side-quests opened up, I spend more time doing all of those than I had spent on the previous entirety of the game as a whole. From an expansive Hunt Club quest to filling the Bestiary with the rare game, to hunting for special summons called Espers, to random side quests trees like fishing or reuniting lost families, it can often feel like the game never runs out of things to do. This is before you get into the detailed and intense weapon crafting mechanic for end-game gear.

The entire experience feels like a labour of love at all times and can be noticed in many small ways. One example of this is the bestiary of fallen enemies: each enemy you fought has a detailed paragraph about how it fits into the ecosystem of the world or the mythology of the game’s world. There are a million secrets to find, and in this way, the game is a million miles away from the flashy but soulless Final Fantasy XIII that was to succeed this one. For those of you who did not give it a try in 2006, or haven’t played it again since then, I urge you to give Final Fantasy XII: The Zodiac Age a go in its current form. Push past the many new names and places you need to learn about as it begins and settles into the rhythm of the world. By the time you’re done, you’ll be so sad to leave it all behind. This re-release is a great example of what an HD remaster can be: adding on in a way that improves the original, and not just shoving it out again with so called “HD” textures.

It’s easily my game of the year so far, and that’s impressive for a title released nominally 11 years ago. 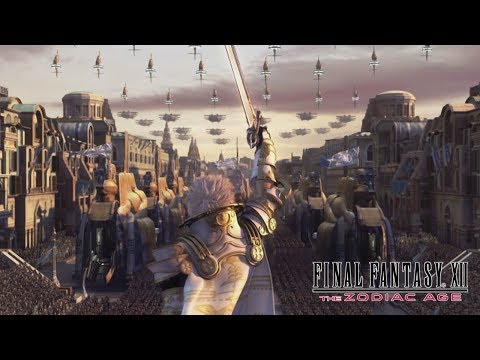