Figment Review – A Colourful And Charming Journey Through The Mind 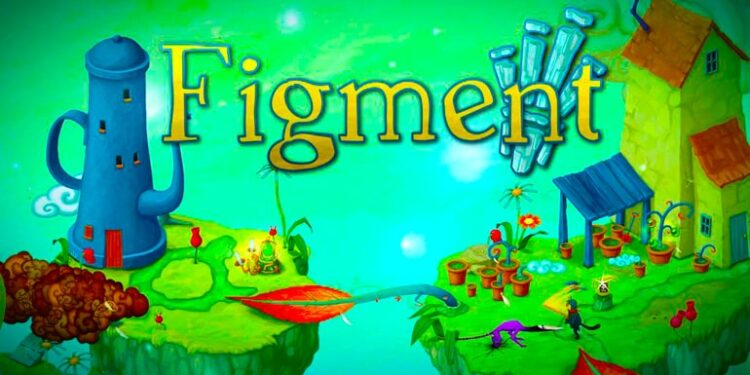 Over the years, there have been quite a few games focusing on the mind and letting us explore its inner workings. Usually, these games tend to be sombre affairs. However, when I first saw Figment, another game that lets you explore the mind, I was taken aback by it’s charming and colourful visuals. It’s easy to think that Figment is a game that shies away from more serious matters of the mind, yet I was surprised at how it covers more serious aspects, such as depression, in a way that is both charming and still handles the illness with respect. For a game with such vibrant visuals, Figment starts off in a surprisingly chilling manner, with a family involved in a terrible accident. After the screen fades to black you are whisked away to the colourful world of the game, which takes place deep inside the unconscious mind of one of the family members.

You take on the role of Dusty, the cynical manifestation of the mind’s courage, whose job it was to protect the mind. Recently Dusty has kept to himself preferring to down cocktails rather than bother himself with the inner workings of the mind. Of course, Dusty is unwillingly forced back into action when a strange creature, calling himself Nightmare, steals Dusty’s scrapbook which contains all his memories. It’s up to Dusty and his companion, the chirpy hummingbird Piper, to try and figure out what Nightmare and his band of minions want and, more importantly, recover Dusty’s scrapbook.

It’s a narrative that feels both unique and familiar as the “warrior is unwillingly called back into action” cliché has been done many times before. That said, it is the setting and how the game handles the subject matter, such as fear and depression, in a clever and respectful way that makes the game feel like something special. On their journey, both Dusty and Piper will be travelling through the various parts of the mind, including the creative and logical sides, before finally making their way to the mind’s consciousness. Along the way, they will need to solve some rather interesting puzzles, face off against various enemies and battle some nefarious singing bosses.

As mentioned, a large part of Dusty’s journey to recover his scrapbook involves solving various puzzles in each of the areas of the mind they will be visiting. Each area has an overarching theme, with the creative side being filled with musical instruments, crazy designs and weird and wonderful visuals while the more logical side consists of gears and all sort of mechanical devices. It’s a fantastic way to illustrate the differences between these two parts of the brain.

Although puzzle solving isn’t necessarily my cup of tea, I have to admit that, thanks to the way in which the puzzles in Figment are structured, I actually enjoyed figuring them out.  Most of these puzzles revolve around finding various batteries and levers in order to power and activate specific machines. I never found the puzzles to be overly complicated and frustrating, although they do take some clever thinking to complete. There were a few occasions where some of the puzzles started to feel a tad repetitive, but those moments tended to be few and far between. Obviously, you can’t protect the mind just by solving puzzles, and luckily Dusty has his trusty wooden sword to help him dispatch the creatures invading the mind. While combat mostly boils down to mashing one button and dodging every now and then, it does help break up the puzzle segments giving your mind a bit of a respite. After all, this isn’t a game focused on combat but rather a game that tries to use combat, exploration and puzzle solving to weave an interesting narrative.

Where combat does become more interesting is when facing off against some of the game’s bosses. Each of these encounters with these singing minions (did I mention that they sing their lines?) feels like a little puzzle in itself that you have to solve to defeat them. These encounters never become over complicated but it’s in these sections that the game so masterfully combines combat and puzzles.

Visually, as mentioned, Figment is an absolute feast for the eyes. The whimsical art direction along with the mixture of muted and vibrant colours makes you feel like you are entering another realm. Each area of the mind is distinct in their design yet manages to feel coherent. I found myself wanting to explore each area I came across.

Sound design is yet another area where the game shines. As mentioned, each of the bosses burst out into wonderful catchy tunes when conversing with Dusty, which strangely made me look forward to each encounter with them. Every area you visit has its own carefully constructed musical score that helps immerse you into the game’s world. The voice acting is spot on with the pessimistic Dusty and the happy-go-lucky Piper being two of the highlights. I wasn’t sure what to expect when I first started playing Figment. It’s a game that, while being on the short side, stayed with me long after I stopped playing. And while the wonderful music, whimsical visuals and charming characters certainly make this a memorable game, again, it’s the clever (and strangely optimistic) way in which Figment deals with the sensitive topics that makes it something special.