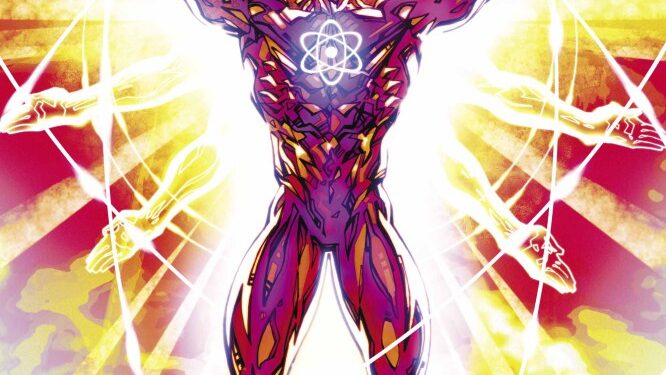 Having returned to the future of 2017, Captain Atom begins the long road towards becoming a trusted superhero again. Which, unfortunately, means lying to everyone about who he is. Thanks to a new government cover story, his new identity is a different Captain Atom entirely – one who opposes the government black ops projects he really works for. We review The Fall and Rise of Captain Atom #4. After a demonstration of how his new powers are entirely safe, Captain Atom is called in to assist on an unusual case. A man on death row has been trapped in time, the result of Captain Atom’s own power overload of several years before. Can Captain Atom correct his earlier mistakes, escape from being under government control, and locate a young man who may be his son?

This series has been a steady build-up so far, smartly establishing Captain Atom as a real person first and a superpowered being second. At times The Fall and Rise of Captain Atom #4 may seem like a step-down, by doing more long-term plotting work than by moving the story forward, but it’s true to form. One of the best traits of the ‘80s series was how it would ease off the gas at just the right times, allowing the story to follow a natural path away from the usual superhero clichés.

The latest government-concocted cover story for Captain Atom is a work of genius and a conspiracy theorist’s wildest dream. A man who is trying to escape from the control of the black ops project he works for is now doing their bidding by pretending to be against them. If it weren’t for the super powers, this could come straight from a classic cold war spy novel and it’s a perfect reflection of society today. While you can see the outcome of the death row inmate’s fate a mile away, it’s more the government response to it which is important here. They understand the mentality of what the world wants their superheroes to be, and they’re more than happy to provide it. Captain Atom is, first and foremost to them, a soldier and will be treated as such. He’s both a champion and cannon fodder to them. It’s a sharp contrast to the human side of him the readers have been following and have come to care about, and that’s what makes this work.

At its best, Captain Atom has always forced readers to see beyond the stereotypical comic book tropes. The supervillains in spandex may be his predictable foes, but they aren’t his real enemies. In turn, for all his powers, it’s the human side of him which scores the true victories.

If you can see beyond what’s expected, you’ll get the most out of The Fall and Rise of Captain Atom #4. It’s slow but steady, creating depth by taking the time to establish the characters in creative ways and building up the tension. It’s hard to know where this series is going, but it’s a great journey getting there.