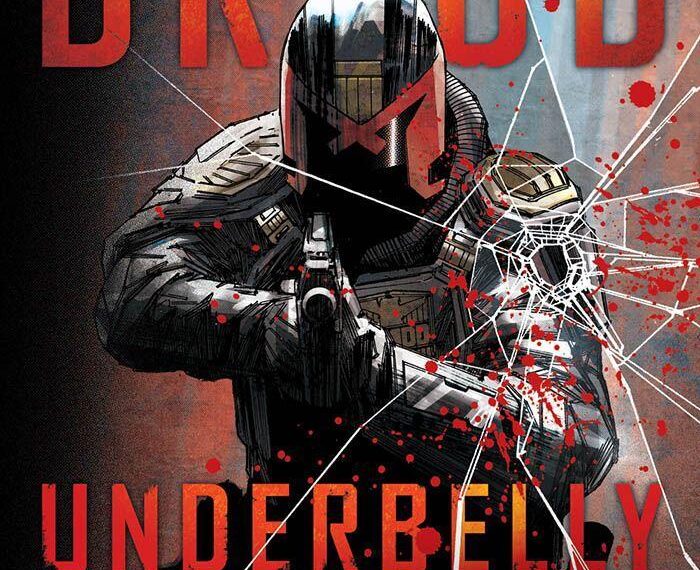 Archibald’s All-Night Mecha Fight Club & Sushi Bar is one of those places where anything can happen, and usually does. We interview Arthur Wyatt. It’s not a place for the timid, but it’s certainly the sort of place where you’ll find hard-working droids relaxing and having a laugh, as puny humans dress up like robots and beat each other up while a demented chef makes futomaki in the background. This was exactly the sort of place where you’ll find some of 2000AD’s writing and art droids on the rare occasions when they get granted time off. When I heard that their editor, Tharg the Mighty One, had decided to grant the Earth an all-new Summer Sci-Fi Special issue, I had to track down one of their droids and find out more.

It didn’t take me long. I spotted the writing droid known as Arthur Wyatt easily as he cheered and waved a cardboard sign about that read “Dredd 3:16 says I AM THE LAW!”. He’s written stories for Judge Dredd, Tharg’s Future Shocks and a whole lot more, and from the plastic cup of low-grade motor oil he was holding I figured he doesn’t get paid enough. I took him to one side, ordered a round of drinks and we started talking… Rick Austin: Tharg’s notorious for smashing apart droids, but lately he’s been a bit green. Uh, I mean, environmentally friendly. Are any droid’s parts recycled and placed into others? Do you have any recycled parts in you, like Morrison-droid’s leg or something?

Arthur Wyatt: Rumour has it a few left-over bolts from the Wagner and Mills droids get used in the construction of all of tharg’s robotic minions.

RA: So what makes this 2000AD Summer Sci-Fi Special so… special? How much pure, unfiltered thrill-power can we expect?
AW: The Summer Sci-Fi Special is a great tradition which they’re bringing back with a great line up, and there’s a lot of up-and-coming talent here. Emma Beeby provides the Dredd story – she’s a relatively new Dredd writer and definitely one to watch.The artist on Orlok, Jake Lynch, is new and his stuff is great – a really nice, atmospheric style that suits the story. Fingers crossed I’ll be collaborating with him again in future. You also get to see new writers and artists have a try at old classic characters – there’s fresh new takes on Robo Hunter and Rogue Trooper you’ll want to read.

RA: You’re writing Orlok the Assassin this time around. Can you give us some backstory for those who aren’t familiar with the character?
AW: Orlok the Assassin first arrived in Dredd in the run up to the Apocalypse War, contaminating the city’s water supplies with a drug designed to raise territorial aggression in the citizens and start wars between blocks. He’s stopped, of course, but unusually for a Dredd villain he survives to clash with Dredd and Anderson another day, becoming a deadly recurring villain.

RA: Orlok’s been around for ages and has racked up a sizeable body count, but we’ve also seen his tragic back-story. If Judge Dredd is an anti-hero, would you say Orlok’s an anti-villain?
AW: Childhoods End softened him a little and gave him a bit of a tragic backstory, but my story is set long before that – so he’s old-school Orlok, a mean badass with a streak of sadism. I’d say if anything he leans flat-out villain. RA: There are lots of fans who keep clamouring for Judge Death in a Dredd film, yet Orlok has a death toll of way over 800 000 and he killed Judge Giant! What does Orlok have to do to get that kind of respect?
AW: He’s a great villain, with a really important place in Dredd continuity – without him there’d be no Blockmania, no Apocalypse War, no Day of Chaos. Yet he’s always been seen as a bit of a prelude to the main event. Perhaps we need to see more of him from before that time…

RA: So if you could cast him in a film, who would be the perfect Orlok?
AW: Someone charming yet intense, capable and deadly – someone capable of giving the impression they’d snap someone’s neck without their heartbeat even raising. Maybe Mads Mikkelsen once he is done with Hannibal? Or Christoph Waltz? Clearly I am all over the place with accents.
After seeing Sharlto Copley in Elysium I think he’d make a really great villain against Karl Urban’s Dredd…

RA: Getting away from all that, what have you been doing lately? There were rumours of you being on the run after you spilled coffee on Tharg’s imported Epsilon MegaYak-hair carpet…
AW: Rumours of my exile to the North American Radlands are vastly overstated – I’m just out here because the atmosphere is better for my gears.
What’s that noise? Is that Mek Quake? Oh no…

RA: Will the droids be allowed to watch the World Cup, and if so which world will you be cheering for?
AW: Having got my start on Tharg’s Past Imperfects I’ve always had a softspot for the alternate worlds where history took a different twist, the dinosaurs lived on. Deinonychus would have a hell of a kick, though you’d have to worry about the ball puncturing, along with opposing players.

RA: Do you have any sort of inspirational message for the readers out there?
AW: Florix grabundae* for buying the Summer Special, of course, as I know you’re all going to. I’d also love to see it inspire others to try their hand at writing or drawing for 2000AD – it’s one of the best ways to get your work in front of an editor and get into comics. Other than that, splundig vur Thrigg **!

At that moment a cheer rang out from the crowd watching the fight and I turned to see what all the commotion was about. The mecha known as Gypsy Rover P8 landed a crippling blow to its opponent, Fifth Season Eureka. I cheered too and then turned back, only to find Arthur Wyatt had disappeared. I know he’s still out there though, writing no wrongs and telling great tales, and I wish him luck.

Even if he did leave me having to pay the oil bill he’d run up at the bar. How Batman Could Beat Superman in Dawn of Justice