Home > Uncategorized > Grab Your Sword – Everything We Know About For Honor

Grab Your Sword – Everything We Know About For Honor

The battle cries of your fellow soldiers as you storm the enemy stronghold, the clash of steel against steel and the flash of red as your ally gets skewered by an enemy spear, this is the type of visceral experience that For Honor promised ever since it’s announcement by Ubisoft at E3 2015. Since then the game has had me intrigued by it’s easy to learn yet difficult to master combat system and bloody multiplayer. From what we have seen of the game so far, it seems to deliver on its promise to finally answer the question, “Who is better, Knights, Samurai or Vikings?” 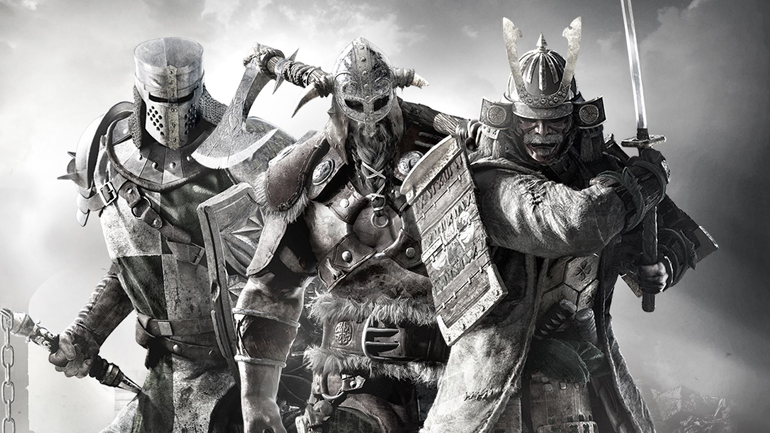 In anticipation of the game’s release next month, I’ve put together a few things to get you hyped for the battle that lies ahead.

A Samurai, Viking, and Knight walk into a bar…

Probably the most important facet of For Honor is that it begs the age old question that has been asked by many kids around the world, who would be victorious if a Knight, Samurai, and Viking fought each other? Player will get to decide which of these factions they would like to side with (Vikings for the win). Each faction has three different classes of warriors to chooses from. Although these classes do vary both visually and in the way they fight it comes down to four basic archetypes. There’s the Vanguard that finds the perfect balance between defense and offense, the slow but deadly Heavy, the quick and nimble Assassin and lastly the Hybrid who’s a jack of all trades.
Choosing the right class that suits your playstyle is quite important as your enemies will quickly take advantage of your weaknesses. No matter who you choose one thing is for certain, steel will clash and blood will run.

Tell me thy tale, young Knight. 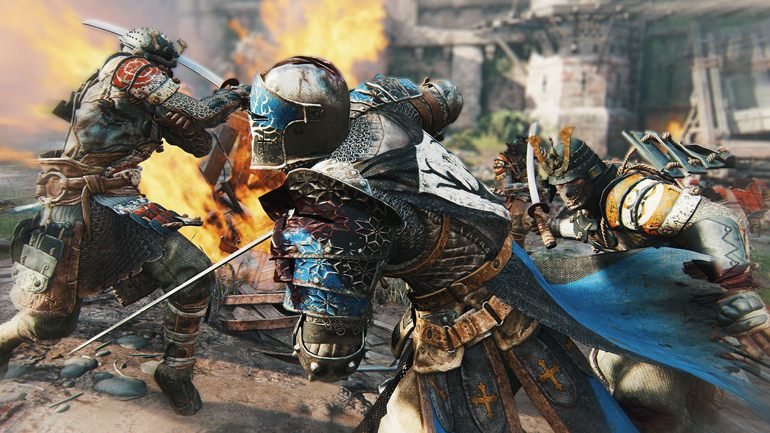 Although a large chunk of your time in For Honor will probably be spent slaying your enemies in multiplayer the game will feature a single-player campaign. The main reasoning behind the single player campaign is to give a better understanding of the universe the game takes place in, and more importantly why the hell a Samurai would be fighting a Viking.

The campaign will follow the bloody and continual conflict between the three factions as a cataclysmic event forces them to face each other on the battlefield. Unbeknownst to the factions, it seems that an evil and manipulative Warlord (is there any other type?) called Apollyon is pulling the strings behind the scenes. Although not much has been revealed about the single player campaign, I’d bet my axe that it will include betrayal, one on one combat and huge set pieces.

One does not simply smash buttons to swing one’s axe. 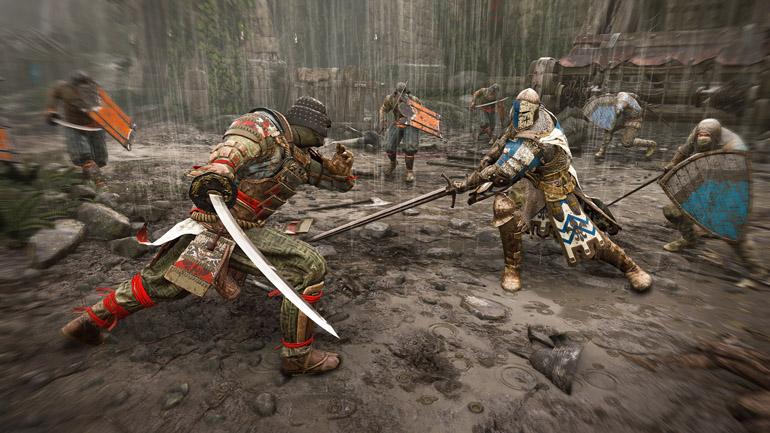 While players will easily slice and dice through the hordes of unnamed soldiers fighting on the battlefield, taking on AI controlled heroes/other players is a completely different story. One-on-one (or sometimes two-on-one) combat is all about anticipating your opponent’s movements and reacting accordingly. It’s quite a tense affair as you circle your opponent waiting for the right time to strike. Although the control scheme might seem overwhelming at first it only takes a few deaths before getting used to it. Basically, it boils down to changing your stance to that of your opponent before they strike in order to block,  or changing it to the opposite of your opponent’s to land a hit. It feels a lot like an intricate dance or a game of chess where you try to out think your opponent. Each character class also has their own unique move sets that allow them to chain together combos which can be devastating to their opponents. There are few things as satisfying (and exhilarating) as successfully defeating two opponents at once.

We go to war my brothers in arms. 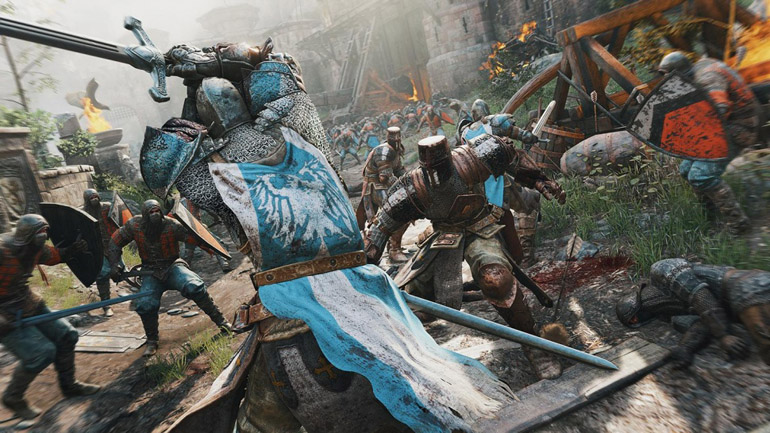 Of course, most of a player’s time will probably be spend fighting for bragging rights alongside or against their friends in multiplayer. For Honor has quite a few multiplayer modes which include, Dominion, Brawl, and Duel.

Dominion is a 4 vs 4 multiplayer mode which tasks players with taking control of certain areas on the map. Controlling these areas gets them points and as in real life, the team with the most points win.

Brawl is a 2 vs 2 multiplayer mode in which players must eliminate their opposing team completely in order to be victorious.

Duel as the name suggests pits one player against another. The last man standing is crowned the victor.

Currently, there are six multiplayer maps announced. Each faction has two maps themed after them. The Samurai maps are set in a citadel built on a cliffside and the other set in a lush forest. The Viking maps are, as one can expect, set in a snow covered canyon and Viking stronghold. Lastly, the Knights maps sees players fighting in and around a castle and cathedral. 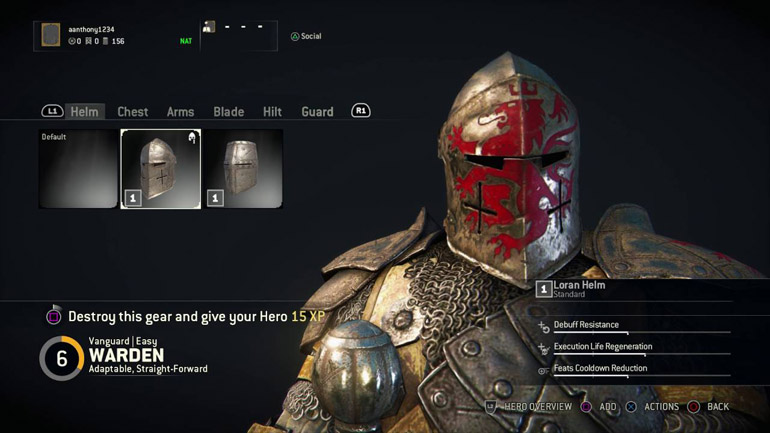 There are few things as satisfying as sending your own customized warrior into battle with his pink armor and bright green war paint. For Honor actually, has quite a robust customization system. Not only will players be able to design their own coat of arms, but will also be able to change their armor and upgrade their weapons. As players compete in battles they scavenge/unlock new equipment for their warrior to use or upgrade their weapons with. These include new helmets, armor pieces, and even weapon parts.

Customization isn’t only confined to making your warrior look nice or be more protected as players can also unlock and equip abilities/feats for their heroes. These feats can give players defensive or offensive bonuses, allow them to set up traps or even give them access to smoke bombs. These abilities are not available to a player at the start of a match but unlock as the game progresses depending on how well your team is doing.

These abilities/feats don’t necessarily make your character more powerful, as beating your opponent still comes down to your fighting prowess, but give you just enough of an edge in order to tip the balance in your favor.

From what I’ve seen and experienced of For Honor, while playing the closed beta, has got me really excited to play the final game. Sure there are still a few questions regarding the single player campaign, but with clever combat mechanics that ensures a tense and brutal close-up experience and some really great characters/classes For Honor is shaping up to be the Viking/Samurai/Knight game you’ve always dreamed of. Now if they could only release some DLC that adds dragons.

For Honor is set to release on the 14th of February 2017 for PC, Xbox One and PlayStation 4.