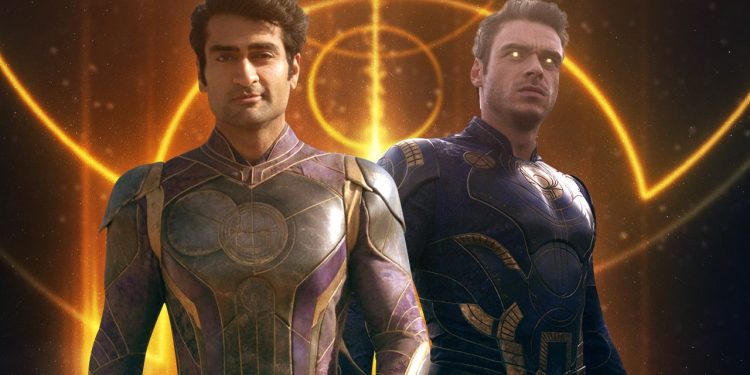 Patton Oswalt may have accidentally let slip that Eternals 2 is in the works and that a big Marvel announcement is coming soon.

Eternals hit theatres in 2021 is the saga of a race of immortal beings who lived on Earth and Shaped its history and civilizations. Following the events of Avenger: Endgame, an unexpected tragedy forces the Eternals out of the shadows to reunite against mankind’s most ancient enemy, the Deviants, after living on Earth in secret for thousands of years.

The movie features Chloe Zhao as its director and a highly influential cast, seeing faces like Angelina Jolie as Thena, Gemma Chan as Sersi, Richard Madden as Ikaris, Kumail Nanjiani as Kingo, Lauren Ridloff as Makkari, Brian Tyree Henry as Phastos, Salma Hayek as Ajak, Lia McHugh as Sprite, Don Lee as Gilgamesh, Kit Harrington as Dane Whitman and in the end credits scene: Harry Styles as Starfox, the brother of Thanos, and Patton Oswalt as the voice of Pip the Troll.

Any news that Eternals 2 is happening is a little surprising considering it is the Marvel Cinematic Universe’s worst-ever received movie, both critically and at the box office. It only has a 47% score on Rotten Tomatoes, and only made US$400 million, despite having had a US$200 million budget.

No official announcement has been made yet, but Patton Oswalt was chatting on the Today Show and mentioned that Eternals 2 is happening and even that the original director will continue for the sequel:

“They have announced there is going to be an Eternals sequel and Chloe Zhao is to direct it. So hopefully there will be more adventures of Starfox and Pip.”

The obvious problem here is that despite the recent San Diego Comic-Con, there has been no official announcement regarding an Eternals sequel, so it’s possible that either Oswalt has mixed up his words and didn’t mean what he said, or that he just let slip on a major Marvel Studios project and that we should be getting a big announcement soon.

With the D23 Expo coming up, some fans think it could happen there.

Hopes For A Sequel

While fans are hopeful for a continuation of the story, most feel that the terrible ratings and criticisms are warranted and hope that Kevin Feige and the team at Marvel Studios will be able to create a better script with Eternals 2 than the one they had for the first movie.

Diehard comic fans were appalled by what Marvel did with the Deviants, and some compare it to a badly executed Zack Snyder’s Justice League.

The 47% critic review had the consensus that “[Eternals is] An ambitious superhero epic that soars as often as it strains, Eternals takes the MCU in intriguing – and occasionally confounding – new directions.

Fans remain hopeful for a sequel and believe that Eternals had the bones of a good Marvel movie but just fell a little short. Audiences said: “It’s a different kind of Marvel movie, but Eternals still contains all the action, humour, and heart that fans are looking for.”

Tell us, do you want an Eternals 2?