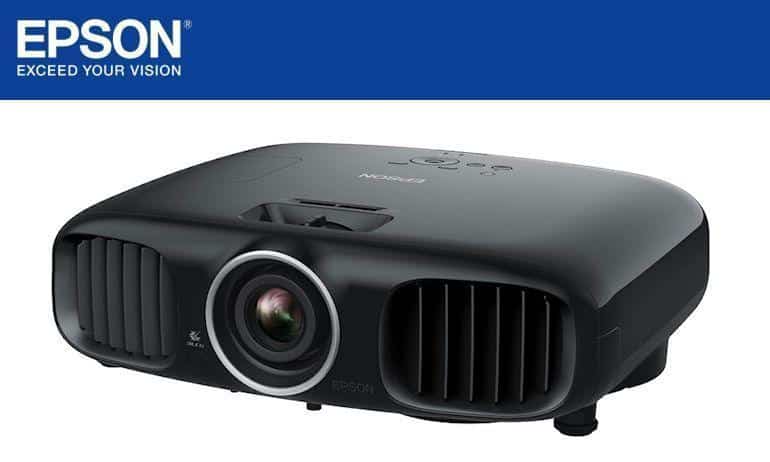 A few weeks ago, FoS reviewed the Espon TW9200 projector; a behemoth in its category. This time around, the Epson TW6100 projector made its way over to our doors. Although not the flagship from the range, the TW6100 offers a slightly more affordable take on Epson’s premium range, with the entry-level unit being the TW5200. While it may be classed on the lower end of the range, the TW6100 still offers full 1080p resolution, full HD 3D, and 2,300 lumen brightness, much the same as that of the TW9200. The main differences aren’t as a result of reduced quality, but rather fewer viewing options and features. This means that users will have to work harder at extracting the fully optimised setup they require for their homes.

It’s easy to recognise the TW6100 as part of the same family tree as the TW9200, with its signature Raptor-like exhaust on the front of the chassis. At the same time, the TW6100 doesn’t look as imposing as the TW9200, mostly due to its more rounded finishes and glossy black coating. The lens is centred on the front of the unit. For easier setup and adjustment, there are two front adjustable feet to assist with the height of the projected picture, as well as two adjusters on the top of the unit for size and focus. There is an infra-red receiver toward the bottom left of the lens for remote access, while there is a control panel, with a few basic functions, toward the rear on top of the unit. Although still on the ‘chunky’ side at 6KG, the TW6100 does weight less than TW9200 at 8.4KG.

The TW6100 has a listed brightness of 2,300 lumens, which should provide sufficient picture quality even in the brightest of rooms. This seems to be a significant claim to be make, but one is, for the most part, true. Even under direct sunlight, the projection was still visible, although not ideal. Watching movies or series with much darker backgrounds poses more of an issue in such conditions. Ideally, then, the best results are achieved in a dimmed room, free from direct sunlight onto the viewing area, with even better results when after dusk. The 2,300 lumen brightness is also ideal for 3D viewing, since the 3D glasses tends to dim actual picture. 3D viewing during the day, then, is almost impractical.

Switching to ECO lamp mode prolongs the life of the bulb, and reduces the noise level to 24 dB (from around 30 dB), but at the same time also dims the picture. There is an option to auto-adjust the brightness of the picture in ECO mode, which means that the projector produces more light when the environment itself takes in more light. In ECO mode, the luminosity drops to around 1000, less than half that of full projection in other viewing modes (such as Cinema). The issue with viewing in ECO mode is that while the brightness can be compensated by reducing the light in the room, the contrast ratio is also weakened, with blacks often appearing as a dark grey of sort.

There’s no denying the premium quality of the TW6100, or almost any other projector from within the same range. But such premiums also come with a cost. Most of it, thankfully, is justifiable, with brilliant overall performances for both 2D and 3D, in almost all conditions. One of the standout features of the TW6100 (and TW9200) is its ability to project up to a distance of 9m (wide) and 15m (tele), both at 100” display size. Compared to many other, more affordable, units on the market, projection is not nearly as far, nor as large, while still providing the same level of quality, and no clear evidence of pixilation. But. And there’s always a but. Apart from the greys, as previously mentioned, the TW6100 has a distinct sound it makes whenever the auto iris feature kicks in. This occurs whenever image adjust is needed to produce the best picture (as the unit deems fit), and results in slight image flickering and a change in brightness. On occasion, the image flicker could last up to a full two seconds, which means a blank screen during that time. Thankfully, there is a simple solution to this problem, as there most often is. Simply turn off the auto iris feature from the settings menu. This does, however, mean that the image quality isn’t at its best, but I’m willing to bet that users can live with a slight reduction in contrast…some of which is actually not noticeable to the average viewer. Having already enjoyed the TW9200 for a few weeks of review, setup of the TW6100 seems tedious by comparison. The TW9200 offers plenty of automated setup features, as well as a horizontal and vertical lens shifting, which is noticeably missing from the TW6100. What this means is that if the resting height of the projector isn’t where it needs to be, it’ll take some effort in getting it aligned. Having placed the unit above the TV stand meant that the projection was much higher up than it need to be. While there are adjustable legs on the front of the device, there is nothing on the rear, which means I had to make due with some peripheral objects to get the boost needed to lower the view. There is the option to make use of the keystone adjustments, but this ultimately reduces the picture quality, as well as introduce scaling artefacts. As mentioned in the Design and Build section, the unit does have its own manual zoom and focus adjusters. Using these to achieve the best size and focus of your projection takes less than 10 seconds to complete…so nothing tricky here.

As with the TW9200, the TW6100 has a good balance in terms of its viewing capabilities. The 2,300 lumen brightness makes viewing a pleasure under most conditions, even when viewing 3D content. The unit also has sufficient amount of interfaces to use for the average user. There are a few negative aspects to the unit, including some trickery in setting up the unit if not in the precise position already, blacks often appear as dark greys, and the issue of the auto iris feature. At the end of the day, once the device has been setup and all modes customised, users will enjoy endless viewing…at least until the bulb needs replacing.

Then there’s the issue in terms of cost. The Epson TW6100 projector will set you back R33,481 (RRP), which, as with the TW9200, doesn’t come cheap. All things considered, especially against the lesser projectors, of which you could get for under R10,000, the viewing quality is unmatched. There are still plenty of combinations to review in this category, but for now, the Epson range has yet to let us down, solely on shear viewing experience.