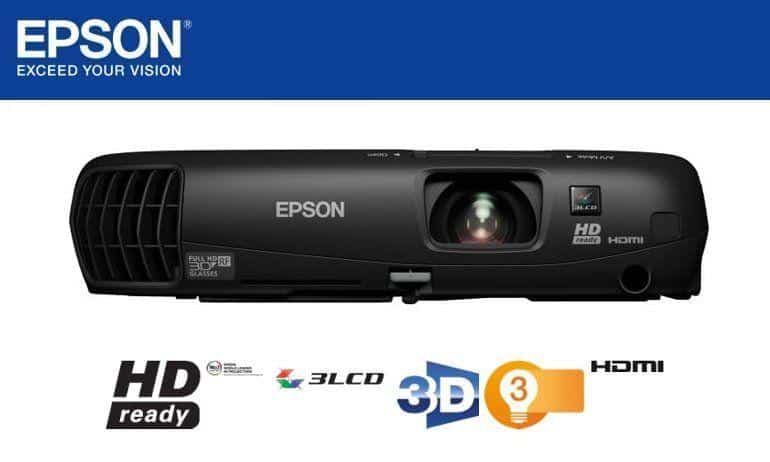 There are many that would argue, both, for and against replacing their television sets with a projector. This argument can become quite pretty heated, but it all comes down to two main points, personal preference, and, more importantly, cost. It is important to notice that the cost referred to isn’t a simple once-off, but rather that of having to maintain the projector by replacing the bulb, for example.

There are many other driving factors that influence the choice in switching to a projector, some of which include the size of the lounge you’ll be viewing in, the amount of light in that room, the picture quality from source, and a need for replacement of your TV. With the cost of Epson’s TW550 now under R10,000, it becomes a more pertinent question as to whether opting for a Smart TV over a projector is, in fact, a smart choice. We take a look at the TW550’s offerings, and how it compares against the average Smart TV in the same price bracket.

Compared to both the TW6100 and TW9200 projectors, the TW550 comes across as a lot more insignificant. That’s not to say it isn’t well build, but it’s smaller, lighter, and lacks the two large vents on the front to show off its aggressiveness. The TW550 weighs in at just 2.7KG, making it less than half the bulk of the TW6100. Compare that to your average 46” Smart TV which weighs in at about 15KG. Its dimensions are measured at 243x325x77mm, which, as a whole, makes it adequately portable if you ever need to transport it between locations. Setup isn’t as simple as it should be (discussed below), and that does have a slight bearing on your mobility with this unit. Unlike the previous two Epson projectors reviewed, the lens is positioned slightly off-centre to the right, along with all the labelling to the right, and the exhaust ventilation positioned on the far left on the front. There is another ventilation duct on the right side of the device, while the left side has no features to speak of at all. On the top of the TW550 you’ll find Epson’s standard configuration, with a few additional functions thrown in. Firstly, there’s the 10-button menu situated on the top rear. To the right of that (depending on your viewing angle), there are three LED lights to indicate the power, lamp and temperature notifications. The front top side of the unit is where you’ll find many of the more important aspects of the configuration. This includes zoom and focus adjustments, as well as keystone adjustment. Just in front of this you’ll find the A/V mute function, which allow you to slide a door in front of the lens to stop light from being projected onto the wall. Although this may seem like a pointless method to “mute” the image, the trap also turns off the bulb once the door is been completely shut. I often found that turning the device off by means of the remote is much easier, but if you’re still wanting to project sound from the unit (which I didn’t do myself), it is a fair enough option.

All of the connectivity options are located on the rear of the TW550. This includes one HDMI port, DVI, USB-A, USB-B, S-video, and RCA (video and audio) inputs. Again, there may be concerns over the amount of HDMI ports available, but nothing that can’t be fixed by means of an HDMI hub, something that I frequently use. Below the connection points you’ll find the 100V – 240V AC power supply input. The unit itself consumes 277W for normal lamp use, and 230W in Eco mode. In standby mode, the unit consumes only 0.4W of power.

Although it doesn’t come near to competing against its brothers, the TW550 still has the same Epson tech found on the TW9200 and TW6100. The TW550 is fitted with Epson’s 3LCD technology, which provides much better picture quality and brightness compared to the average DLP-based versions. The TW550 has a 3000 ANSI lumens lens, which provides ample brightness to view even during peak sunlight. This, however, doesn’t include situations where sunlight is directly shone onto the wall or screen on which you’re viewing. While there are optimal viewing settings in terms of distance and projection size, there’s not much I can do about the room’s dimensions, for which I projected from a distance of 3m (or approximately 10 feet). The projection size itself was about 3m across as well. At this distance, watching movies and standard TV posed no concerns at all. Although the unit only has a 720p (1,280x800px) resolution, it easily upscaled to 1080p when connected to a device with this output. Be that as it may, watching HD content on your DStv HD decoder only yields a maximum 720p resolution in any case. Thus, the true resolution test required a PC connection with 1080p output. Image and Video playback adequately smooth and sharp, although there are slightly noticeable granulation viewing certain content. The TW550, however, isn’t immune to the screen door effect, in that the clarity appears inferior when viewing content requiring much precision, such as text-based documents and Web pages.

The TW550 has a 5000:1 contrast ratio, which may seem adequate, but doesn’t really meet the standards expected. Switching to greys and colours, you’ll have less pessimism, as colours are mostly bright, sharp and well saturated, while greys are easily distinguishable. The reason behind the difference in contrast and colour output can be attributed mostly to the LCD projection tech, although there are a few other driving factors from the environment as well. That being said, the colours and picture quality aren’t as vibrant as with the TW6100. Although many users will opt to go for the default setting, the colour, brightness, and many other features can be optimised for your environment, as well as the content you’re viewing. There are a few defaults colour modes to choose from, which include movies, 3D viewing, living room, and even for gaming.

For the most part, viewing 2D content is the norm for about 99% of the average viewing experience, even when owning 3D capable machines. With that in mind, the TW550’s 3D projection leaves a lot to be desired here. Having tested the capabilities using my 3D-enabled graphics card on my PC, I found it tricky to get the ideal image to make it worth my while; although I must admit I’m not the biggest fan of in-the-home 3D solutions. The device uses Epson’s RF-synchronised active LCD shutter-based 3D glasses, which are an optional extra on the TW550, which may set you back a few hundred Rand for an official Epson pair. For those interested in watching 3D content, however, the overall quality isn’t exceedingly bad, if you can bare the initial setup.

It is worth noting that the TW550 does include 2W stereo speakers, but the sound quality isn’t much to write home about. There is also a slight matter of noise emitted by the fan when running even slightly warm using Normal mode, which can be dramatically reduced when switching to Eco mode. Thankfully, using Eco mode provided sufficient brightness for viewing during the day as well, but isn’t suited for all content during this time. Another negative aspect is the readjustment sound, which makes a slight rattling sound whenever there are great differences in scene contrast. Switching between channels is the most obvious for this occurrence, as often switches from picture to black, and then back to picture.

Having a projector that doesn’t include vertical and horizontal shifting will always pose some sort of setup challenge. And the Epson TW550 isn’t immune to this. Setup on this occasion easily took up to 20 minutes to get the positioning, keystone, size, and height just perfect. All of this, and I hadn’t even started on the picture setup via the settings menu. The Epson TW550 carries an RRP of R9,805.54 including VAT, easily placing it below the R10,000 mark at which many view average 50” Smart TV. In addition, connecting my PC to the projector makes it a lot ‘smarter’ than the average, stand-alone Smart TV. There are many points to argue over when the ideal time to switch to projectors over that of the conventional TV. With an estimated R500 to replace the standard projector bulb these, the option is becoming a lot more enticing of late. The biggest pitfalls for the projector over TV are the weak contrast ratios, especially during day time viewing, as well as the quality of the content projected. Watching any SD material on a 3m projection isn’t the most pleasant, and actually makes it seem a lot worse than viewing the same image on a TV.

With cost not of too much concern, as shown above, and with many of working during the day and only really watching TV after 5pm in any case, there’s not much worries over brightness, at least for me. Watching movies through the PC connection is decent, and watching 720p content from the DStv decoder is also ideal. HD sports are also very watchable, since many of the sporting activities are well lit in any case. The argument is swinging in favour of the projector in recent times, although it must be added, there’s still a heavy emphasis on personal preference. I, for one, will be happy to replace my TV for the TW550.