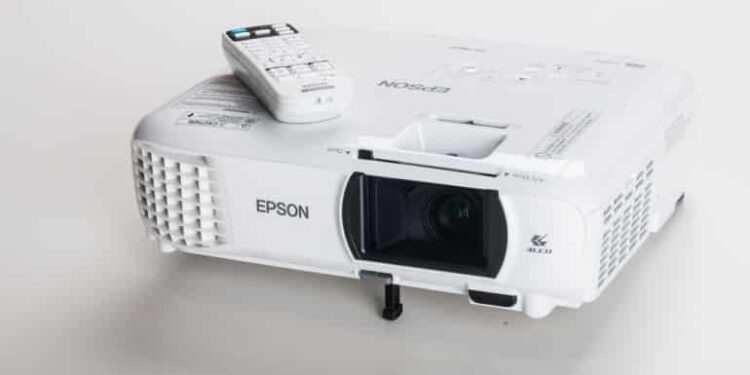 Ever since I reviewed my first projector in 2014, I fell in love with the idea of switching out my TV for a projector. Last year, I reviewed the relatively inexpensive Epson EB-U04. At the time of completing the review, it was one of the most affordable projectors with a native 1080p resolution. That particular model became my first projector purchase, and one year on I’m still enjoying all the benefits of it.

I received the spiritual successor to the EB-U04, the Epson EH-TW610 projector, for review. While the actual successor to the U04 is the recently released EB-U05, there are a lot more similarities between the two models in question. There is, however, one key change that makes all the difference. As with the U04, and most of the Epson projector range, the unit is emblazoned in an all-white shell, which I’ve become accustomed to. It doesn’t necessarily blend in with any of my other appliances in the living room, but with its position in my cabinet sitting behind the couches, it doesn’t matter too much. Its compact frame also assists in it being hidden away from view, and even more so when the projector is running. The TW610 is slightly bigger and bulkier than the U04, with the units measuring 302x252x92mm and 297‎x244x77mm, respectively. In terms of their overall weight, the TW610 has an extra 100g to lug around.

It is worth pointing out, however, that the TW610 does come with a built-in wireless adapter (IEEE 802.11b/g/n), allowing you to connect wirelessly to the unit and stream content from your smartphone. In terms of the connectivity, the addition of the wireless component is the only change. The rest of the connectivity features include a USB 2.0 Type A, USB 2.0 Type B, VGA, x2 HDMI, Composite, MHL, and Cinch audio in.

The only other difference in the two units is the slight change of the front face. While the U04 has a black, plastic grill across the face, with the fan ventilation on the left and lamp on the right, the TW610 has a more conventional white, plastic face, which blends with the rest of the body and also accentuates the area around the lamp, actually resembling the human eye. The rest of the body remains almost exactly the same, from the rubber feet, to the controls, buttons and sliding lens cap. In terms of the device specifications, there are a number of similarities between the two projectors. There are, however, quite a number of changes and tweaks made to the setup, which creates a much different experience. First, the TW610 has a native 1920x1080px resolution with a 16:9 aspect ratio. When compared to the U04, the 1920x1200px resolution is slightly bigger than the TW610, but with a 16:10 aspect ratio, which isn’t always ideal for viewing. Most media players, however, will scale according to the film and crop off the wasted space, so you can still enjoy the 16:9 experience without elongated figures. On paper, both devices have a 3,000 Lumen specification, while there are some differences in the Lumens when running in Eco mode. The TW610 projects at a lower 1,925 Lumen, while the U04 at 2,100. When doing a side-by-side comparison test, there was a noticeable difference in the brightness despite equal Lumen specification. The TW610 has a brighter projection that you’ll be able to notice with the naked eye.

When it comes to colour reproduction and quality, the TW610 also produces much better results. Colours appear significantly more vibrant, while also appearing crisper. The key to the image quality upgrades is derived from the improved LCD. Even though both devices project using Epson’s 3LCD Technology, the TW610 has an enhanced RGB liquid crystal shutter, with more lifelike representation of colours.

Another of the noticeable differences between the two devices is the projection size at a fixed distance. As a result, the image quality is also somewhat sharper overall, even while projecting at the exact same distance. In the specifications, the U04 is able to project a 60” image at a distance of 2.17m away from the wall or screen. The TW610 is able to achieve the 60” benchmark at just 1.64m. This means that when switching back to my standard mount, the overall projection size was significantly wider, thanks to this upgrade, and due to the 16:9 aspect ratio.

It is worth noting that many of the changes noted here may be due to the fact that the EH range of projectors is geared more towards entertainment, while the EB range caters for more conventional business usage. Both devices, however, can hold their own with any projected content, including text, images, videos, and even gaming.

One of the drawbacks with having a brighter projection is the decrease in lamp life. While the U04 has a 5,000-hour life expectancy for normal projection, the TW610 has 4,500. That 500 hours can make a difference of 3 months, depending on your usage. The disparity is much larger when comparing Eco modes, a difference of 10,000 hours versus 7,500 hours.

Another slight drawback is the contrast ratio. The U04 has a contrast of 15,000:1 compared to the TW610’s 10,000:1. Often times, many consumers find contrast ratio measurements a bit wishy-washy, but there are some points to be made here. The darker colours aren’t as dark on the TW610, with greys also not receiving an even tone across a range, and rather blends together in a blur than appear crisply distinct, for which the test is based. When watching action films, this isn’t a big distraction, but for darker lit films, the tones are visibly different than on the U04. There is one positive, though, in that the TW610 doesn’t have the same audible iris shift. On the U04, you’ll be able to hear the iris switching between the lighter and darker contrasts, especially when the switch is fairly sudden and when the brightness is turned up. On the TW610, while the sound is still there, it’s barely noticeable unless you’re specifically trying to pick out the sound between the scenes.

And, as always, you may want to invest a small sum on any type of speakers alongside the projector if you haven’t done so already. While TVs have reasonable sound systems already built in, the size of the projector means that only a small speaker is able to be fitted, which is, more often than not, very tinny. No surprises there. When it comes down to it, the Epson EH-TW610, overall, is a much better projector. While the lamp life is somewhat questionable, the additional brightness and image quality makes it worthwhile. The projection distant is also a noticeable improvement on the TW610, but may also throw off your room design if you’re upgrading from the EB-U04 projector and have a permanent fitting in place. With both units now selling for the same price, it’s easy to recommend the TW610 over the U04 thanks to these improvements. If you’re worried about the longevity of the lamp, even in Eco mode, then, and only then, would the U04 be a better fit for you.