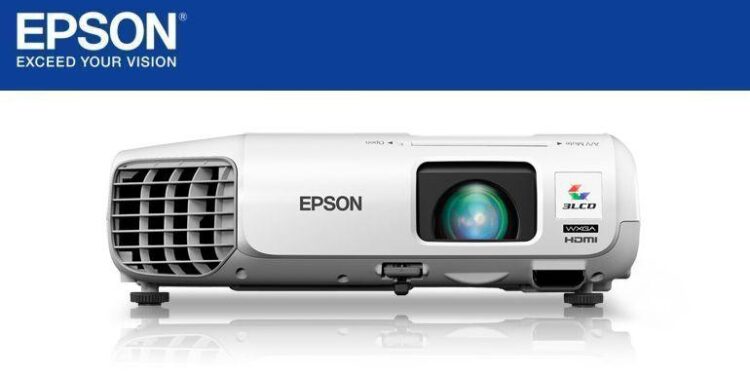 This past year, Epson has expanded on its, already significant, range of business, education and household projectors. Last month, Epson added a few more projectors to its catalogue, most of which were either education or business centred. One such projector from its business range is the Epson EB-955W Projector. While it may cost almost twice as much as the, previously reviewed, Epson EB-X20 Projector, it does offer more for your hard-earned buck. How much more is what we attempt to discover. In terms of the looks of the 955W, it’s very much in line with the design of many of Epson’s business projectors. In fact, the 955W is very similar to the X20, identical actually, if not for a few logos and the USB port for the optional wireless support. Another slight difference in the build is that the 955W is 300g heavier than the X20, the former weighing 2.9KG. Refer further to the Design and Build section on the X20 for more detail.

To make use of the added Wi-Fi connectivity support, all you need is a USB dongle. Using the remote to access the Main Menu, users are now able to connect to their local Wi-Fi access point. This, then, enables the Wi-Fi streaming capabilities, which allows playing content on your smartphone, and/or other Wi-Fi enabled, stream supported devices, and then viewing it directly via the projector without needing any further connections. As straight forward as it may seem to connect on the projector itself, it isn’t always as simple to enable content streaming on most other devices to allow it being viewed over Wi-Fi. While the design and build of the 955W may be almost identical to that of the X20, there have been a few more changes in terms of the internals, to which we can attribute the additional 300g mentioned previously. We start off with a comparison with the lens and display. The 955W has a 0.59” LCD panel with MLA, compared to the 0.55” on the X20. The X20 has a standard lens of 2,700 Lumen (1,900 in economy mode), whereas the 955W has an improved 3,000 Lumen lens. The display also has an increased resolution and aspect ratio of 1280x800px and 16:10, respectively. Although the unit has been designed for business use, the change from 4:3 to 16:10 makes it a lot more suitable for home use, if ever you choose to double up in terms of its use. The 955W has a zoom factor of 1.6 (over 1.2 on the X20) and a (preferred) size of up to 280” at a projection distance of between 1.8 and 2.2m (for 60” display). While the projection distance may seem quite limited, the unit can be placed as far back as 5m (and further if need be). Bear in mind that the focus would have to be adjusted and the screen size increased to achieve best results. The added distance does diminish the quality slightly, although, if you’re wanting a bigger display some lenience would have to be observed.

The increased image quality makes quite a big difference on the 955W over the X20. The picture looks a lot clearer over a larger area, with the focus and pixilation not being of great concern. While the unit has a suggested resolution of 1280x800px, it is able to support larger, 1080p, resolution from your other devices by means of upscaling. The end result isn’t a deterring factor by any means, and even though it isn’t as clear as the previously reviewed native 1080p projectors, you’ll have very few quarks when watching your movies. Whenever I’ve received a projector for review, I’ve noticed that my viewing habits change somewhat. Whereas before I’d spend more time gaming on my PC, and limiting my TV viewing to just sports and the occasional movie, I now spend most of my viewing time with the projector. Even though I have connected my PC to the projector for movies, series, sport etc. I don’t use it as often for gaming. That being said, the occasional game I do play still looks quite a lot better than on my much smaller, 24” monitor, but it is preferable to switch to a controller over having the keyboard on your lap.

It’s difficult to make a statement that the Epson EB-955W is an outright business projector, when it’s a lot more versatile than just that. With the added support for a higher resolution and larger aspect ratio, the 955W improves in all the right areas over the EB-X20. The biggest concern, however, is that the unit comes at a cost that’s almost double. For an average business the major difference would be the added Wi-Fi support, while the resolution wouldn’t matter that much for simple presentations. At the same time, for home use, the resolution makes quite a big difference. Users, then, would only truly be able to make their decision based upon a side by side comparison to determine what they’re willing to live with in the end. At the end of the day, the 955W is a better projector on all counts, not including the price, and if you’re able to afford a price of around R12,000 for it (considering that quite a few smart TVs fall around in this price range), then I would recommend it over the X20.