Elektra #2 Review – A Bit Too By-The-Numbers 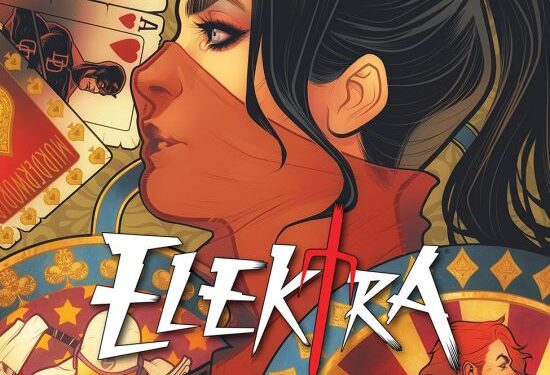 Elektra continues her Las Vegas trip in a similar vein to how she started it: by being dragged into trouble. She vows to leave and avoid getting wrapped up in other people’s problems – a serious problem for her in the past – but it’s a promise she can’t keep, as she’s attacked by a playing card-themed gang. However, there’s more going on than she realises, and it isn’t long before she starts investigating the truth about Midway Casino. We review Elektra #2. Tracking down leads, she finally confronts X-Men villain Arcade, who has a new spin on an old idea. With celebrities being forced to take part in his latest MurderWorld contest, it’s time for Elektra to play the game…

After a promising first issue, there’s a dip in quality in Elektra #2 as the writing is less compelling and the art slightly more unfocused. There are still some wonderful moments, like the gang who bear more than a passing resemblance to the Royal Flush Gang, and every fight scene shows Elektra at her best. As for Arcade, he may be an unconvincing antagonist and scrambling for a last chance at respect, but he’s also never looked better. The problem is that there’s less subtlety in Elektra #2. Any depth to Elektra’s motivation and personality, which were highlights of the first issue, is lacking here. Instead, she’s suddenly doing exactly what you’d expect of her, and while that may please some fans it’s all a bit too by-the-numbers. Even her detective work is questionable, with everything slotting into place just a little too easily.

For her to claim that she’s trying to avoid trouble in Vegas one moment, and then deciding to track down a lead, requires a leap of logic. If she wants to avoid trouble, why not simply leave Vegas? What’s keeping her there? Perhaps if we knew more about her reason for being there then it would be easier to understand her actions. Throw in some disposable background characters too, and it’s hard to sympathise with anybody caught up in Arcade’s scheme. Again, the artwork is fluid for the most part, but let down at times either by some awkward pacing or the recurring problem of a few panels which look unfinished. I hate to gripe on about this, but when clearly visible background characters lack facial features, you can’t help but wonder if you’re reading an issue of The Question instead.

Elektra #2 isn’t the worst issue out there, but it’s a disappointment after this series got off to such a fantastic beginning. Hopefully, things will pick up soon. If they can fix these small problems then they could still be on to a winner.