It seems that CCG’s have been popping up all over the gaming space recently. From the godfather of the collectable card game genre, Magic the Gathering, to the very popular and extremely fun Hearthstone. These games not only draw players in with their easy to learn difficult to master mechanics but also with the promise that the next pack of virtual cards you open might just contain that all elusive rare card you’ve been yearning for. Now, Bethesda has decided to nudge their way into this increasingly crowded genre with their latest CCG, Elder Scrolls: Legends. Does the game manage to stick its head above the flood of other CCG games out there?

The game mostly plays as one would expect. Players each have their own deck consisting of up to 50 cards, 30 health points and 1 point of Magicka (the currency used to summon cards which increase with one each turn). Cards fall into one of five attributes, strength, intelligence, willpower, agility and endurance. Each of these attributes has their own unique theme such as agility, which consists of loads of Khajiit warriors who gain strength each time they attack. When building their deck players can combine any two of these attributes together. Figuring out which of the attributes complement each other the most might seem intimidating at first but once you get the hang of it, it can become quite addicting building your own unique deck that plays to your strengths. 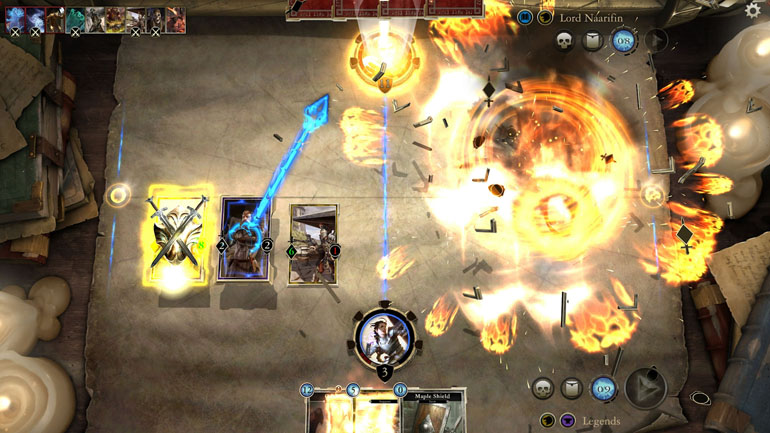 Players then have to defeat their opponent by using Magick to summon cards and reduce their opponents health to zero. Cards in Elder Scrolls: Legends come in four different types, creatures (the stuff you attack with), items (basically just buffs), support (cards that grant continuous effects) and abilities (spells).

All this might sound a tad familiar to Hearthstone fans, but here is where things start to differ. In Elder Scrolls: Legends the playing field is divided into two lanes, one is the shadow lane and the other the normal lane. Creatures deployed in a certain lane can only attack an opponent’s creatures in that same lane. The shadow lane mixes this formula up a bit as creatures deployed in this lane operate in the shadows which means that for one turn they cannot be attacked by the opponent’s creatures. This mechanic helps players to set up weaker creatures without the fear of them being eliminated in the next turn.

Along with the split lanes, the game also introduces a rune mechanic which can allow a player who is down on their luck to come back swinging. Basically, each section of a player’s health bar has a rune allocated to it, there are five in total. Each time a player’s health is depleted and drops below the section where the rune is that rune activates and allows the player to draw a card. This mechanic helps players that are bleeding health to recover by receiving more cards, which in turn could help them stage a comeback (depending on the luck of the draw). If that player is lucky enough they might draw a Prophecy card which can be played for free. These cards can have devastating effects such as un-summoning an opponent’s creature or doing ‘X’ amount of direct damage to their opponent. 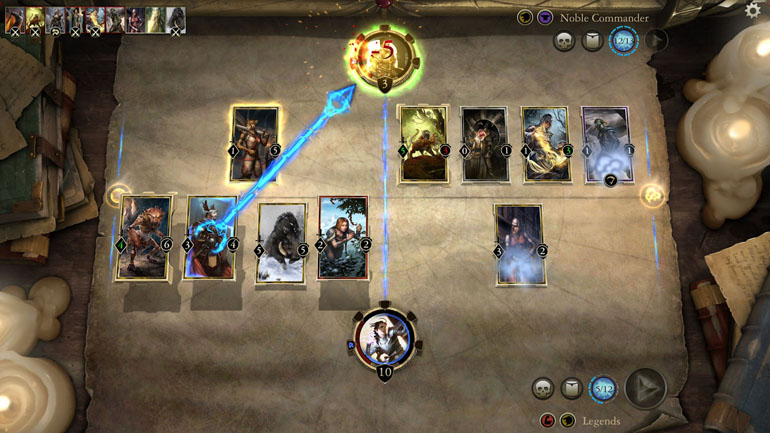 For those that are new to CCG’s or just need to refresh their memory Elder Scrolls: Legends introduces a story mode which basically serves as the game’s tutorial. The story might come across as being a bit ridiculous but it does an admiral job of easing players into the strategies and mechanics of the game. This mode does have some interesting ‘choose your own adventure’ mechanics that allow players to choose one of two different outcomes during certain story moments. The choice the player makes will affect the reward they receive. I found this one of the main reasons for slogging through the story as the rewards definitely made it worthwhile.

For those seeking a challenge and want to hone their skills without all the frills of the Story mode, there is the Practice mode which allows players to practice their skills against an AI opponent while gaining experience and credits for completing daily quests. Then there is the Solo Arena mode which tasks players with setting up their own decks and taking on AI opponents while the VS Arena mode does the same as the Solo Arena mode but pits players against human opponents. Playing both Arena modes costs gold, which can be bought with real money or won by completing daily quests and winning matches. In the end, as someone who admittedly isn’t an expert on CCG’s, I found myself enjoying playing Elder Scrolls: Legends. Sure it might not be able to convert hardcore Hearthstone players, but it is a solid enough CCG and one that adds just enough new and interesting mechanics to the CCG’s formula to differentiate it from the more well-known ones out there. For those itching to play something different to the other CCG games out there, Elder Scrolls: Legends might just scratch that itch.