7.1 on a budget? This might be what you're looking for!

If you’re in the online gaming space, there are a number of important peripherals as part of your arsenal of tools. While the keyboard and mouse make for some direct advantages in-game, the support of a good headset, whether to hear crucial sounds or if you’re communicating with your team, is just as crucial.

If you’re new to this environment or looking to move into the competitive world of online gaming, the good news that there are products suited for just about every budget.

But, having said that, the old adage still remains true: you get what you pay for.

In recent years, however, there have been many attempts to move against the grain, hoping to launch quality headsets for a lower premium. At the same time, many of these have fallen by the wayside, either because the quality didn’t quite match up, or were playing in a space too close to the market incumbents.

EKSA is a relatively new brand in the market, challenging the idea of having to pay a large premium for a high-quality product. With the EKSA E900 Pro gaming headset, it sets out to bring virtual 7.1 surround sound to gamers on a budget.

Many of the so-called high-quality-on-a-budget are easily caught out from the moment they arrive and are unboxed, only to reveal a relatively sub-par looking and feeling unit. The EKSA E900 Pro is anything but. The unit is very minimalistic in its design, which is already a huge plus for me, but when in hand and on-head, they feel great, too. EKSA has not skimped on the cushioning on the E900, offering a generous amount on the headband as well as the earcups, both surrounded by faux-leather to also look the part. Having spent quite a number of hours recently playing through Horizon Zero Dawn for PC [https://www.fortressofsolitude.co.za/horizon-zero-dawn-pc-review/], I could easily sit for up to 4-5 hours without feeling any discomfort, or even realising the headsets are still on my head.

The rest of the design is fairly straight-forward. The earcups are made of plastic with the headband connection in a fairly thick and robust metal. The outer portion of the earcups also have a metallic grille with three red LED lines to indicate the “E” in the EKSA logo. The red accent also features around the earcups between the faux leather and plastic, as well as on the inside of the earcups and the wires connecting the two speakers leading into the headband. There are three ports and a volume wheel on the left-hand earcup. The ports are for the USB Type-C cable for PC, the standard 3.5mm jack with a lock (to avoid it being easily pulled out) for standard audio, and another 3.5mm for the detachable mic.

The EKSA E900 Pro offers a few different setups depending on the type of connectivity you’re going to be using. For starters, and as the primary option, is the USB Type-C to USB cable. In this setup, users will have access to both standard audio and the mic, when connected. In addition to this, there’s also the option of the virtual 7.1 surround sound audio. For this, you’ll have to visit the EKSA website to download the driver.

Installing the software is pretty straight-forward. However, to use it, not so much. It took a few minutes to figure out all the various menus and settings, and the lack of manuals or reading material in this regard could make it a bit challenging for some users, especially when you need to right-click to reveal some options on the software, which isn’t very intuitive.

Once you’ve managed to navigate all the settings, there are quite a lot to play around with on EKSA E900 Pro, which is the good part. The most important of these is the 7.1 virtual speaker shifter, allowing you to enable to feature, as well as ‘position’ how the speakers a laid out in the virtualised environment. The software is also very important for the mic settings, which we’ll discuss further down.

For console and smartphone users, you can use the 3.5mm audio cable for standard sound. There’s no 7.1 virtual surround sound, however, as this is limited to the USB cable using the downloaded drivers. Setup here is a lot easier, simply plugging in both sides of the cable to the source and the headset.

If you want to use the mic, simply take it out the box and connect it to its own 3.5mm port on the headset. There’s a button below the volume rocker, which mutes and unmutes the mic. Pressing the button unmutes the mic, while depressing it puts it on mute. Again, this is not very intuitive, but with only two options, it’s not really difficult to confuse once you know which is which. You don’t necessarily have to play around with any of the settings, but it does enhance its performance. Users have the option to setup the volume, sample rate, Xear support and Microphone Boost via the software.

On the packaging, as well as the cables, it states that the EKSA E900 Pro supports both PC and MAC. On the download site, however, there is no option to download any MAC drivers, limited to just that of Windows for the different versions. That isn’t to say it doesn’t work on MAC, it does, but without the driver support, users won’t have access to the 7.1 virtual surround sound settings to enable it.

The software has a few preset audio settings for the unit. These are Hi-Fi, movies, music and custom. Users can also add additional configurations and save them for later use. It’s a bit odd being a gaming headset that there isn’t a preset for gaming. Using the Hi-Fi configuration with the virtual surround sound enabled provides the best quality, for most audio. Even when listening to music, I found it a lot better configured for my taste. For best results, I recommend selecting the Hi-Fi equaliser setting, then enable the virtual surround sound, followed by the Xear Surround Max for enhanced audio. 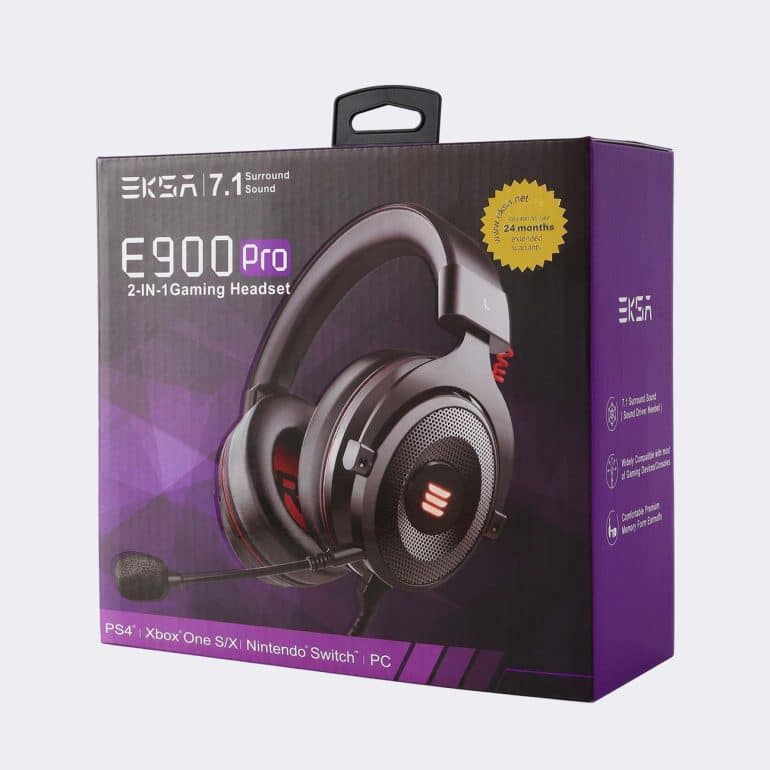 There isn’t a lot of information available when it comes to how many or the type of drivers are used within the EKSA E900 Pro. The information that is available states that the speakers are 50mm, with its sensitivity between 115dB and 121dB and impedance of 30Ω. While we don’t know how many speakers there are, the size is on-par with many other headsets available on the market.

The default audio settings are good, leaning towards the bass-heavy approach, but still clear voice and peripheral sounds. Using the settings mentioned above, there was a far more balanced playback, through the highs and lows for any audio, whether in-game or watching a movie. Needless to say, there’s still plenty of bass to be had on the E900, excellent for action movies or games with plenty of explosions and the likes. The 7.1 virtual surround sound makes quite a big difference when gaming. Using in default settings, the softer and higher sounds don’t get that much attention. Turning on the virtual surround brings this to the fore, where you can easily pick up a lot more surrounding sounds, such as background noises, footsteps, rustling of the leaves and grass.

Users are forced to utilise the device on the default settings when using any of the other platforms, whether it be via the USB or 3.5mm cables, since there’s no drivers available. It’s good enough, but not nearly as great as with full options available.

Thanks to the low impedance, the EKSA E900 Pro delivers quite loud audio. Comfortably loud was running the audio at about 30% on Windows, and could manage to about 50-60% before it gets uncomfortably loud. Turning it up to 100% I took it off my ears while still listening for any distortion. Thankfully, there wasn’t any to report, even when turned up further on the headsets and the media player. That’s quite impressive.

When it comes to the mic, it does the job well enough. For most of my testing, I used the PC setup via the USB cable and didn’t experience any issues. The audio was clear to anyone else on the opposite end while playing games and didn’t pick up too much of the ambient noises. However, the same cannot be said for the mic via the 3.5mm. The quality tends to drop a tad. On PC you can adjust some of the settings via the software, but, again, if you’re on console or smartphone, there is some echo that you can’t always shake.

The headset audio is loud, as previously mentioned. At the same time, the earcups aren’t the most sealed off. While it drowns out any surrounding noises from disturbing you while you game or watch movies, anyone else around you will be able to pick up the audio. It’s not the most private, especially if you’re on a call. In your own home, however, there aren’t any issues.

The EKSA team promised high-quality audio on a budget for gamers. With the EKSA E900 Pro gaming headset, they have achieved this goal. With a bit of tinkering, the audio quality is great, and with the added cushioning, you can lose yourself in hours’ worth of gaming without realising. Minus a few shortcomings using the 3.5mm option, the unit is easily recommended.

EKSA is offering a discount to all Fortress readers. Simply use the “20FORTRESS” to apply at checkout on your next purchase on the site.

The EKSA E900 Pro gaming headset provides great audio playback with a comfortable fit for almost anyone. At an extremely competitive retail price, the unit is a great option for casual gamers. And it also comes with a carry case.