Christopher Nolan shares the same skill as James Cameron for somehow making every film he releases an event. People seem to be unable to talk about anything else for months surrounding its release. Personally, I’ve always felt that its unfortunate that we have to review things as soon as they come out – a few months of perspective are always going to be good for a clearer view. With the release of Dunkirk on DVD, this seems like the perfect time to touch base with the World War 2 picture and see if it manages to sustain itself as one of the Truly Greats, or just an interesting attempt. 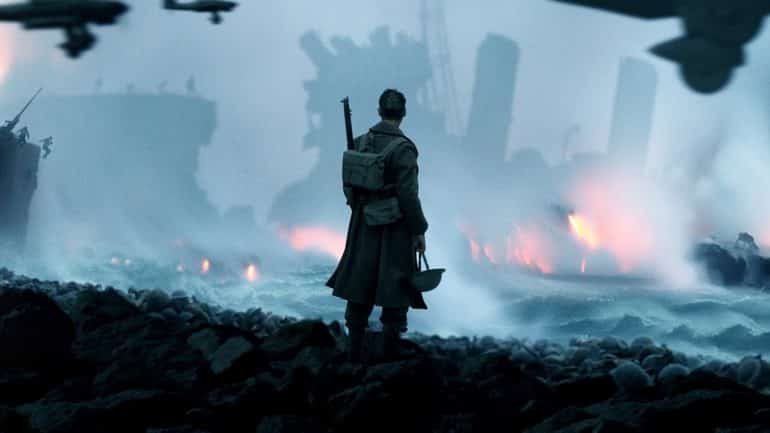 Dunkirk as a narrative retells the events of 1940, where the German army had pushed the French and British allies all the way to the northern French coast. With the soldiers being painfully close to home, and facing death or capture, every civilian ship that was on the south coast of England rallied to save as many soldiers as possible. Over 300 000 ended up being ferried to safety in this ad hoc way, and it undoubtedly saved the British army to fight another day, turning the tide of the war. It’s a remarkable and interesting story, but one which Nolan does not focus on especially closely, which sort of disappointed me from the start.

Rather, Nolan tells three stories, each with a separate title: Land, Sea and Air. These are told interspersed but across different time frames. Land takes place over 1 week, Sea over 1 Day, and Air over 1 hour, with all three intersecting only right at the end. This is an interesting mechanism and it creates great character moments (for example, we meet a shell-shocked soldier who is rescued by ship; sometime later in the film, but earlier in the narrative, we see him as the captain of a ship that is turning away those needing to be rescued from the sea).
However, in terms of telling the story that is here to be told, for me the story primarily should have been focused on the Sea and Air sections more completely. The Land portion has the young soldiers Tommy, Gibson and Alex all trying to escape to the ships, fleeing enemy soldiers who are not seen or experienced to any large extent. Much of it felt like filler to me. The Sea section tells of the civilian Mr Dawson, his son and his son’s friend taking their own boat to try and save as many soldiers as possible. This is meant to be representative, but the scale doesn’t come across – in real life, this really was a herculean effort, spearheaded by hundreds of separate civilian boats, and reducing them to one is rather ineffective and getting the point across. The Air section has some fantastic scenes with attacking Spitfires and works well to get the visual emphasis of the war across, but again, there could have been more to see here.

Nolan made a big point of the realistic effects in the movie, and this is great to see, but it sometimes works against him – while it is impressive for any film to have so many soldiers and ships and planes actually there, the fact is that in real life there were so many more, and reduces the true scale of what occurred. CGI shouldn’t be a crutch, but it can be a tool, and it doesn’t hurt your movie to use some of it.

The acting is acceptable, with a lot of it being intentionally understated. Dialogue is minimal, which is a stylistic choice you may or not enjoy. The central figure of Commander Bolton (Branagh) was the most interesting for me, as he seems to the figure that is affected by all that occurs, and the one we can connect with best. Unlike films like Saving Private Ryan, the on-screen violence is minimal and unlikely to turn many stomachs. I’m also fine with this as a stylistic choice, and it’s actually quite refreshing to see. Dunkirk, for me, felt like an interesting artistic experiment in how to shoot a war movie using time and space in different ways. That it was marketed as a historical retelling of events was perhaps misleading, and I have no way to know whose fault that was. The story is background to the film techniques being waved in our face, and some may enjoy that. I felt rather uninvolved in regards to it by the end myself though. Perhaps on IMAX, as I have heard, this feature would have been more captivating, but at home, it’s not quite enough to hold me. I got up to make popcorn and didn’t pause the movie, hoping that the boring part would be done by the time I came back.

For die-hard fans, there’s a pleasing selection of special features on the Blu-ray about the making of Dunkirk that will be interesting. For everyone else, I would recommend seeing this film once, only once, but don’t put it right at the top of your list of priorities.