Daffy Duck Was A Better Green Lantern Than Ryan Reynolds 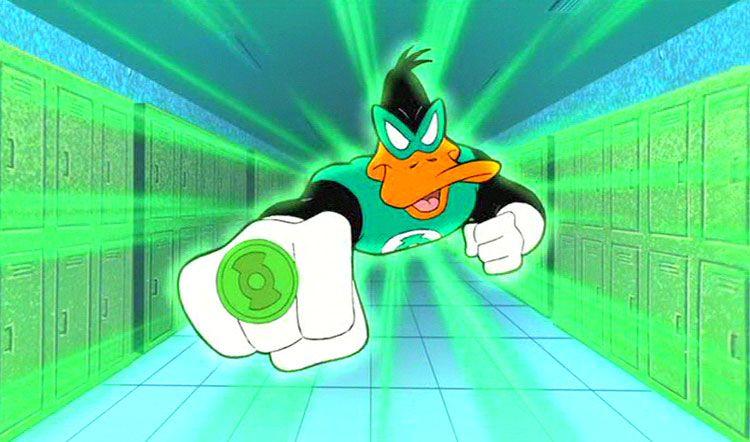 As a fan, you may also know that the animated Green Lantern: First Flight is a far better “origin” film for Hal Jordan and that the GL Corps has been better represented in everything from the Justice League animated show to Batman: The Brave and the Bold. Emerald Knights was so-so but scored for the Mogo short story and the Green Lantern animated show was pretty good, so it’s not like there’s no hope.

But there’s one animated tale that a Green Lantern fan should add to their collection, and that’s the Green Loontern episode of Duck Dodgers (Season 1, Episode 9).

Sure, in the past Daffy Duck has parodied several superheroes and his Stupor Duck parody of Superman is a bit of a classic. But this one takes it seriously, or at least as much as a Daffy Duck cartoon can. There are jokes all over, yet the plot and depiction of the GL Corps are wonderfully faithful.

The plot is simple but fun. Duck Dodgers (Daffy) gains possession of Hal Jordan’s Green Lantern costume due to a dry cleaning error and after trying it on he finds the GL ring in one of the pockets. Quickly coming to grips with the power of the ring, Dodgers gets summoned to Oa to join his fellow Green Lanterns in fighting the villainous Sinestro’s army. It turns out that the evil minions are teleporting GLs to an unknown location for some dastardly purpose. Despite it being obvious that Dodgers isn’t a real Green Lantern, they need all the help they can get and it’s up to him to embark on a mission to infiltrate Sinestro’s base, help the others find a way inside and, if possible, rescue the trapped Green Lanterns and battle Sinestro. Using his natural talent for being a sneaky (and sometimes cowardly) thorn in the side of anyone he meets, he actually does an impressive job of it all and even goes one-on-one with Sinestro himself. While he may not win he still does enough to help the Corps, save the day, stop the villain – and earn the respect of everyone.

This may sound as unlikely as a rookie Hal Jordan defeating Parallax by tossing him into the sun when the rest of the highly-experienced Corps proved useless, and you’d be right. However, it works. There are enough cameos from Katma Tui, Salakk, Tomar-Re, Ch’p, Boodikka and a whole lot more to make the fans cheer (even if Guy Gardner’s moments are so brief it’s almost a crime) and the GL oath gets said. Kilowog calls him a Poozer. Sinestro may be silly but he still sounds wonderful and is kept pretty much in character. Whenever Dodgers is confused by something, there’s always someone to explain it to him and the audience.

Oh, and some guy called Kevin Smith is the voice of Hal Jordan… just in case you were interested.

As for Daffy/Duck Dodgers, he’s in good comedy form. He is mocking things like Hal’s choice of a vinyl outfit and mask (“Who knows what this guy’s into?”) and the traditional supervillain speeches to being totally confused about who the Green Lanterns even are, what the oath is (his version isn’t as funny as G’nort’s from Brave and the Bold but he does squeeze a great Batman reference in there) and calls Ganthet “Poppa Smurf”.

It may not be the Green Lantern story that hardcore fans have always been wanting, but it doesn’t disappoint either and remains respectful of the original source material. If you want an entertaining way to spend 25 minutes and fancy something a bit different, you could do a whole lot worse than this.