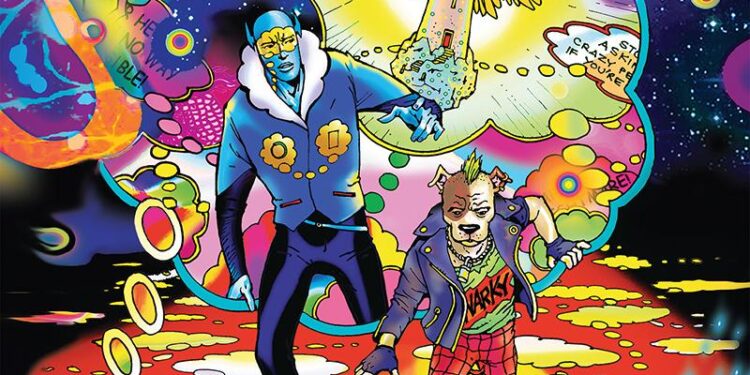 “To stop a psychic bomb that threatens to render all of humanity catatonic, the last Dream Voyager awakens! When the evil Zeirio goes on a rampage throughout the Dreamworlds, it’s up to a new generation of the Dream Gang to put him down.” Seldom in life do you encounter a piece of art that completely captivates and blows your mind. I remember the music videos for Green Jellÿ’s “Three Little Pigs” and Paul McCartney’s “We All Stand Together” standing out as pieces that equally enthralled and confused my young mind. Then, Chuck Palahniuk’s Fight Club blew the lid off everything I thought I knew about life.

Now, Brendan McCarthy’s Dream Gang has the honour of being the next piece of art to leave a mark. The surrealism of it all is sometimes difficult to grasp, yet oddly instinctual. You can’t help but feel as if it appeals to your subconscious, opening up a world that you knew was there but never dared to enter. It’s equally nirvana and a paradise lost. Visually, the artwork is comparable to the halcyon days of Frank Miller’s The Dark Knight Strikes Again, but with a bucket of colour poured over it. It’s quirky, odd and keeps you revisiting the pages to search for hidden messages and things you might’ve missed the first time. The trippy nature of the colour scheme lends itself well to the story, without becoming a parody of a 70s acid trip.

Story-wise, McCarthy explores the unsettling world of dreams and nightmares. It’s beautifully vivid, but equally scary as he taps into concepts and sensations that are extremely close to home. It’s a whirlwind of a story that requires you to pay close attention, but it’s ultimately rewarding with its originality.

Do we live to dream or do we only come alive when we dream? Read McCarthy’s Dream Gang and make up your own mind.