The Dracula File Review – Deserves A Place On Your Shelf 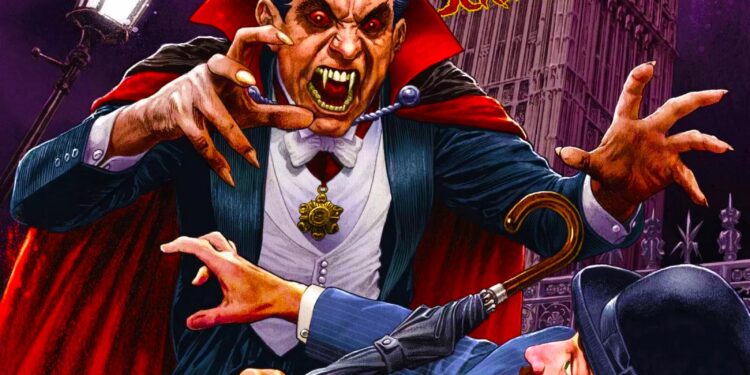 This collection from Rebellion – home of 2000AD – comes from the pages of ‘80s horror comic book SCREAM! As such, you can expect the usual incredible artwork and solid (albeit predictable) storytelling. It’s an unusual choice for a collection, although it’s good to see Rebellion making good use of their extensive archive of comic titles. The Dracula File may bring back some fond nostalgic memories for some readers, while for younger readers it may seem less scary and more silly.

London, 1984. A mysterious defector has escaped from East Germany, but been shot repeatedly during the attempt. Incredibly, the man survives and is revealed to be the lord of the undead himself, Dracula. Now unleashed on an unsuspecting British public, Dracula kills indiscriminately, feasting on the blood of his victims and leaving a trail of dead bodies in his wake. Only one man has the understanding capable of stopping him: Colonel Stakis, a former KGB agent who has abandoned his country and his career to track down and kill the ancient vampire – no matter what…

Primarily written by Rogue Trooper scribe Gerry Finlay-Day, the story is one of the more accurate homages to the original Dracula tale, covering many of the elements often forgotten, such as his need to rest in soil from his native homeland. The way of introducing him to the modern world beyond the Iron Curtain of the Cold War is inspired, and there’s some joy in knowing that he’ll be racking up a body count of corpses in each instalment.

On the down side of that is how Dracula is also forced to suffer some indignities, from sleeping in a bathtub when his coffin is gone, to being mistaken for a guest at a costume party where someone spills their drink on him. Yes, at times he’s played for laughs. However, even then it’s delivered with a trademark sly sense of satire. Unfortunately, there’s very little about Dracula which makes him a compelling character to be invested in, other than seeing him kill.

Stakis, the man hunting him, suffers a similar problem. While it’s impossible to question his determination – he beats up his superiors and essentially defects just to achieve his goal, after all – he’s also rather one-dimensional. However, the joy of their character dynamic is that it’s hard to know who the real hero of the piece is. Naturally, we want Stakis to succeed for the sake of the lives of countless people, yet we also want him to fail because we don’t want Dracula’s grisly adventures to end.

Sadly, The Dracula File does end – and rather abruptly, too. Due to the series being cancelled, there’s no real resolution to the story, which may disappoint some readers. But if you’re looking for classic horror comics, this overlooked classic deserves a place on your shelf.