Doom Patrol Episode 5 Review – This One Rings A Bell 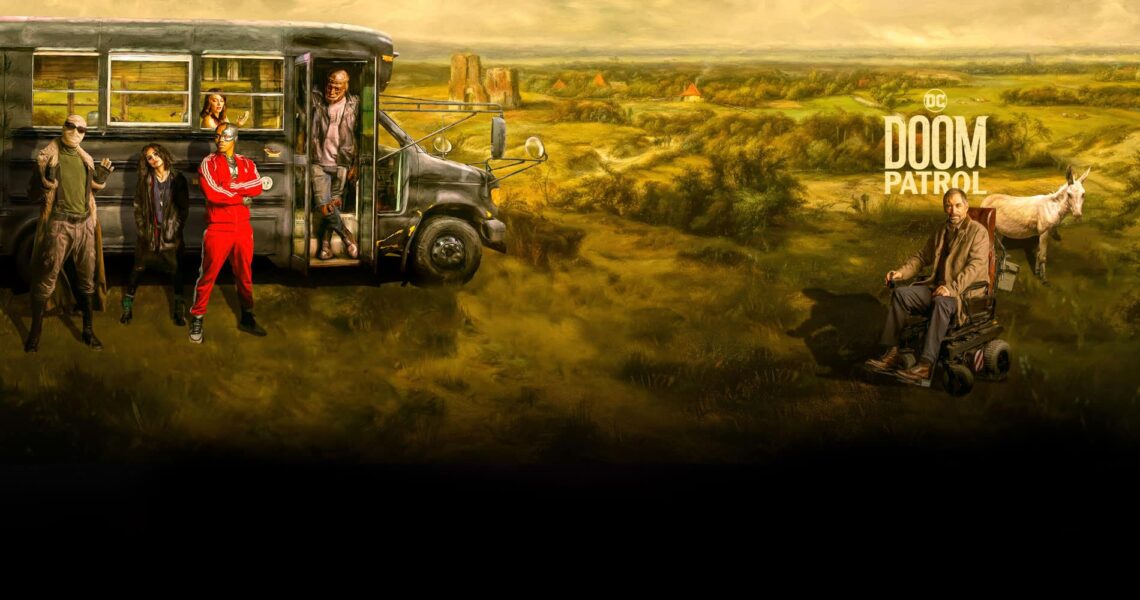 Following on from the most disappointing episode of the season so far, the second part of the Cult of the Unwritten Book storyline manages to bounce back in spectacular fashion – and with some style to boot. Despite a plot that diverts from the source material by jumping through time while spinning multiple sub-plots, it manages to be a lot more focused and feels far more natural than the previous episode.

The arrival of the giant eye in the sky called The Decreator is bad news for the world, as it begins decreating everything in sight. Yes, it’s the apocalypse… again. While Ezekial the Cockroach may have survival plans (assuming he can cut a cheese deal with the rats), the Doom Patrol have been separated and they’re in no shape to save the world. As Cliff and Crazy Jane struggle to understand the realm of Nurnheim, Larry is having issues with the Negative Spirit and Cyborg and Rita have their own problems.

If anybody can save the world it’s Mr Nobody and his captive, The Chief. But with Nobody chafing at having been absent for the past two episodes of the show, will he help his enemies? Meanwhile, The Chief has a plan to save the world that involves time travel, creating a cult, and devouring lots of chocolate. Is it truly the end of the world, or can the Doom Patrol manage to save the day once again?

The story here pays far more attention to the core characters – primarily Crazy Jane and The Chief – than on Constantine-wannabe Willoughby Kipling and the Cult of the Unwritten Book. It’s all the better for it, too. The audience is given their first real glimpse into Crazy Jane’s complex and tragic past, as well as why The Chief is such an integral part of the Doom Patrol, while Larry and Rita are given some moments to shine. As for Cliff, he continues to play the layman role to perfection as he shambles from one scene to the next with complete frustration.

It’s true that the story’s shift means that the Decreator’s threat is diminished to the point of a being a non-threat. But then, how much menace and personality can a floating disembodied eye truly convey? If the Eye of Sauron in Lord of the Rings couldn’t do it, the Decreator has no chance. Thankfully, the writers instead use the opportunity to develop some unique Doom Patrol moments that range from thought-provoking, terrifying and grim to absolute barmy fun. Is it too funny, to have a cockroach lecture a rat about how cheese is made, have The Chief do a classic spit-take, and feature an insane cult war-dancing to the disco “classic” Ring My Bell as they battle the oncoming apocalypse? No. This is also an episode where a man is persuaded to stab himself in the eye with a pen, so don’t be fooled into thinking it’s a comedy and plays everything for laughs. While many shows would struggle to find the balance, this episode of Doom Patrol manages it with ease.

If there’s any real complaint here, it’s that the solution to the villain is almost an easy out that results in (apparently) everyone and everything being saved. It isn’t actually an issue in itself, and this episode still offers a creative solution to a problem that could have simply solved itself (as in the comics). Still, it feels like a cop-out in hindsight that the stakes were ultimately so small and had no lasting ramifications. That being said, it’s good to see a happy ending of sorts and Doom Patrol doesn’t need to go overboard on cannon fodder and artificial grimness.

Doom Patrol has a long way to go before becoming a modern cult classic show, but it’s showing that when it’s on form it can easily stand alongside the best of them.

It may not be perfect, but this episode hits all the right notes at the right times.