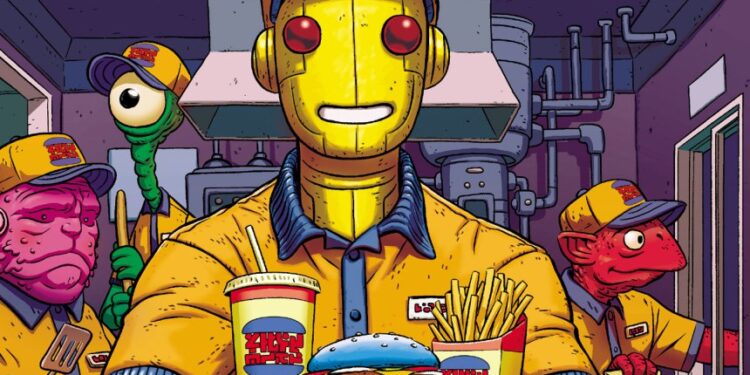 Doom Patrol #4 is a slight improvement over previous issues in some ways, as it goes through the basics a little more successfully. In fact, Larry’s brief moment to shine in this issue is almost done well and Danny’s flashback is pretty decent. There are even one or two jokes which aren’t too bad. However, for every step forward there’s at least one step back. The sub-plots aren’t particularly engaging, and the lack of strong characterization mean that every scene meanders along with little enthusiasm or real emotion. Casey lost a leg? It’s no big deal, as she just puts on another like it’s all a daily occurrence. Danny is being fed through a meat grinder? Well, at least it’s a chance for some exposition.

And that’s one of the biggest problems with this series. There’s a lack of reason to care about what’s happening.

Casey Brinke may be missing a leg, but after the quick attachment of a robotic prosthetic she’s back in the game. Meanwhile, Larry Trainor, Cliff Steele and the Negative Spirit sit in judgment as to whether Larry wants his freedom or desires to become Negative Man once more. While Casey sets out to rescue Danny the Ambulance from being turned into burger meat, Niles Caulder watches on… Varying levels of weirdness has never been a problem with the Doom Patrol. Things are supposed to be a bit off-kilter for them, or even outright bizarre. In this series, it seems like things are weird only because it’s expected. When nobody seems particularly bothered by it, it all seems pointless. The characters don’t act like people – even bizarre, super-powered comic book people – but rather like stock figures with no real depth at all. A great example is Larry’s lack of motivation for wanting to become Negative Man again: because he wants to help people and do the right thing. That’s it. But why? Because… nothing.

Even the art fails to convey any sense of true drama. What Danny is going through should have been horrific, or disturbing at the very least. Instead, it carries all the menace of a Wile E. Coyote cartoon. Maybe it’s an intentional lighter touch to echo the classic old Doom Patrol comic books, but if so then it’s a poor choice because it makes the story feel uneven.

Like the old saying goes, if you like this sort of thing then you’ll find it the sort of thing you’ll like. However, that’s hardly a ringing endorsement and this series has a long way to go before getting things right.