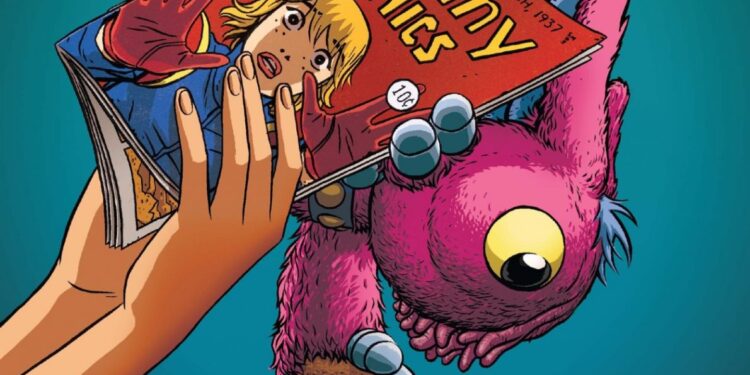 In Doom Patrol #3: The unoriginal origin story of the not-quite Code Pru EMT, Casey Brinke! Another Niles Caulder moment of boredom! Lots of exposition where actual story should be! More weirdness-for-the-sake-of-weirdness instead of plot! In fact, if you like hype over substance then this is just the comic book for you! [dropcap]O[/dropcap]kay, so it turns out that Casey Brinke used to be a comic book character within Danny the Street/World/Brick, and managed to self-actualise enough to get out into the real world. Meanwhile, her new roommate Terry None has no problems with a hole in the apartment wall and two strangers being in the lounge who suddenly merge with a third other-dimensional entity. Why doesn’t Terry care? Uh… pizza. Let’s just say pizza. Why not?

Seriously?! This is what people are expected to pay good money for these days?! This half-assed, watered-down misunderstanding of the Doom Patrol is apparently the best DC can come up with?! Maybe I wouldn’t feel too badly about it if the Casey story didn’t feel like such a weak rip-off of Flex Mentallo’s origin. Thankfully, Flex is on hand… just to give a recap of how he came to be in the Doom Patrol, before being relegated to background character status. Wow. Just… wow.

But then, even the Doom Patrol itself seems to be a bit of a background character in its own title. Hardly shocking, since there’s no actual plot to speak of three issues into this series and no clear direction being laid out. I know there are some people out there who claim to be enjoying this, but I just don’t get why. I genuinely think that there’s an Emperor’s New Clothes mentality here, that people are only saying they enjoy it because they don’t want to appear uncool. Sure, the art may look good (actually, I’ll give artist Nick Derington a round of applause for doing such a great job in shifting up styles throughout this issue as needed). The framing device in this issue is quite nice too. But it’s all sizzle and no steak. There’s no sense of contrast to make characters stand out, no emotional build to make you care about those characters or the situation. There’s nothing. From a story standpoint, it’s an empty shell of a comic book.

To make matters worse is the diatribe from Gerard Way at the back of the book, about how brilliant the Young Animal line is. He congratulates himself and his team on being oh-so-clever by having a recurring theme in all their comic books (which was coincidental, so obviously it’s a stroke of genius). It’s one of the most pretentious pieces of waffle to hit the printed page in years, and an additional slap in the face after such a dreary issue.

Again, I’ll probably be in the minority by not liking this, but I don’t care. I’m taking the high road and sticking to what I truly believe. I’ve loved the Doom Patrol for years, but I don’t love this. I don’t even like it. This isn’t the Doom Patrol, and that’s the bottom line.