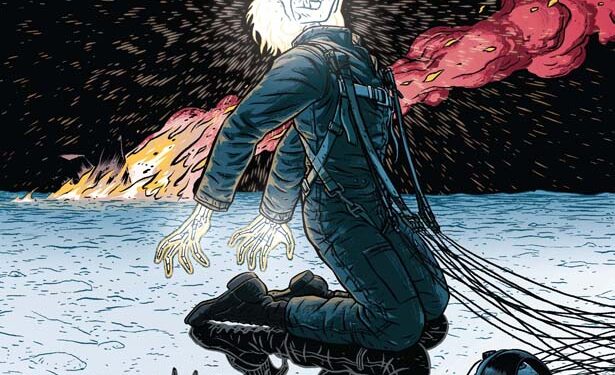 Maybe it’s just me and maybe I’m wrong, but my opinion of this second issue is that it’s even worse than the first. Fans of the Doom Patrol know that their adventures are usually more than a little strange. Yet they’ve always functioned according to some kind of internal logic. This doesn’t. I don’t want to be spoon-fed explanations, because I’ve never wanted or needed that. Instead, I simply wish that this stopped trying to be intentionally bizarre and instead started being good.

See Larry Trainor fly! Fly, Larry, Trainor, fly! But wait, it’s some sort of flashback/somnambulistic dream/vision, and he’s really freaking out about Russian nesting dolls and urging strange people to fight because of the whole Negative Spirit thing. Wait, what’s quirky EMT Caey Brinke up to? Why, she’s just pulling out one of her own teeth which contains a secret message, and not finding it strange that her new roommate Terry None can rebuild Cliff Steele’s Robotman body overnight. Then again, she isn’t too worried about Cliff’s brain being in a pan either, since her cat Lotion is looking after it. But look! See Niles Caulder fly in a hot air balloon! Fly, Niles Caulder, fly! Be thrilled as a reactivated Cliff defeats some boring villains and feel your heart melt as Cliff and Larry reunite once again with little emotion displayed by either! As for Casey, why, a trip into the back of the ambulance transports her to the cabaret, where Flex Mentallo welcomes her back to Dannyland! Yes, the art is more than decent. Unfortunately, with a script this weak there’s only so much that can be done to make it work. As a character, Casey Brinke is still woefully under-developed so why should readers care about her? What, because she’s in this comic book? Not good enough. She lacks definition and hasn’t earned any sort of following. She still hasn’t even found it strange or disturbing that her old roommate seemed to explode in the last issue. But then, it’s the same case for everyone and everything in this.

Another thing that made the Doom Patrol work over the years was that they were freaks in a bland world, where they were either battling foes who were weirder than themselves (thus making the Doom Patrol look more “normal” by our standards) or villains who were hyper-normal (which made us sympathize with the DP because we loved their unique nature by contrast). In this, that whole point has been lost – along with any sense of subtlety.

Here, people seem completely fine with any strangeness going on, to the point where the Doom Patrol – who haven’t done anything of consequence two issues in – come across only as background characters. There’s no clear direction regarding plot, and it’s impossible to tell what the tone of this even is. It simply isn’t the Doom Patrol.

If you want something properly DP-flavoured, rather read the latest Squirrel Girl or Cinema Purgatorio. In the former you have a human brain in a robot body battling a hive villain composed of lots of tiny people, while in the latter’s Code Pru you’ll find a quirky EMT (with a cat, too! What a coincidence!) who deals with extremely bizarre scenarios. Both are more entertaining and far better written than this pale imitation of what the Doom Patrol used to be.