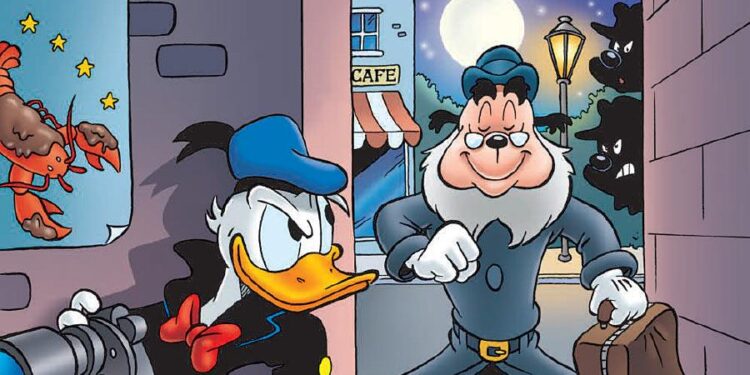 In what can only be described as a massive coup, IDW Publishing secured the rights to bring classic Disney characters to its readers. It kicked off the Disney party with the release of Uncle Scrooge in April, and now May has become the month of the mallard with the arrival of Donald Duck #1. Even though it’s titled as the first issue for IDW, it’s actually #368 in the Donald Duck series. So consider this as merely a transition to another publisher rather than a reboot. Issue numbering aside, the tile stays true to the charm and wholesome fun that has made “Unca Donald” and his three nephews Huey, Dewey and Louie such treasured characters.

The adventure begins with “Shellfish Motives”, a caper story done in the traditional Disney way. Donald’s uncle Gideon McDuck (do any of these characters have parents, or just a lot of uncles?) hires the ruffled rascal to follow the Gourmandian Master Chefs’ Club, who are being targeted by “dark forces”, and report back with key information. As expected, pandemonium erupts, Donald messes up (in his usual slapstick way) and his nosy nephews interfere. This issue only features part one of the story, so you’ll have to wait until #2 (or #369) to find out what happens next.

The rest of the pages are filled by light-hearted, shorter stories. Make sure to read “Wrecks, Lies, and Videotape!” – it is a hilarious, tongue-in-cheek commentary about reality TV and leaked home videos. While it might sound like somewhat of a taboo subject for Disney (I’m actually surprised it made it past the suits), it’s done in a subtle, family-friendly way that pokes fun at the adult situation.

IDW’s new Disney titles might be targeted at the younger audience, but I do see the older generation who grew up watching the Disney Power Hour and reading the Disney Magazine enjoying these stories just as much. Pick up a copy of Donald Duck #1 and roll back the years to a simpler time.