All these years later we are still cringing. 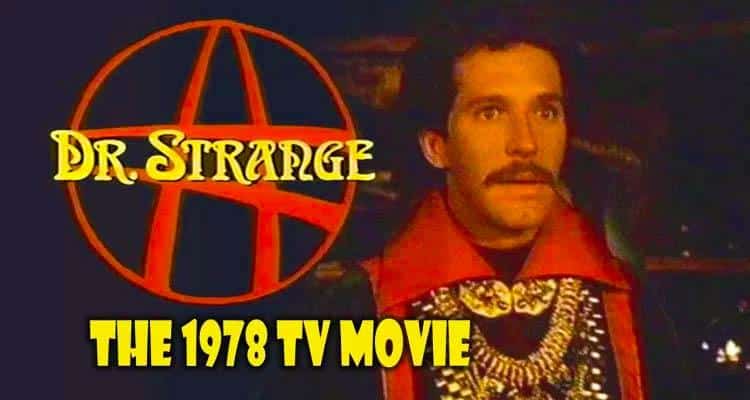 There was a 1978 Doctor Strange movie? Yes, there was. And Marvel probably wants you to forget all about it.

He’s Marvel’s Sorcerer Supreme, the Illuminati representative of the mystical plane and founder of the team known as The Defenders. He’s spent time counselling Spider-Man, helping out the Hulk and advised Reed Richards on how to battle Doctor Doom.

He’s been against superhero government registration, slept with his student Clea and has a manservant named Wong, who polishes his amulet for him. He was also given his own movie in 2016, starring Benedict Cumberbatch.

He’s Doctor Strange, and he rocks!

But let’s take a look at that other Doctor Strange film, the one from 1978.

No, not the animated one. That film was probably Marvel’s best-animated movie and captured the essence of the character perfectly.

No, we’re going further back to 1978, to look at the first live-action Doctor Strange movie starring Peter Hooten in the lead role.

It was made for TV, and Marvel’s been rather quiet about it over the years. 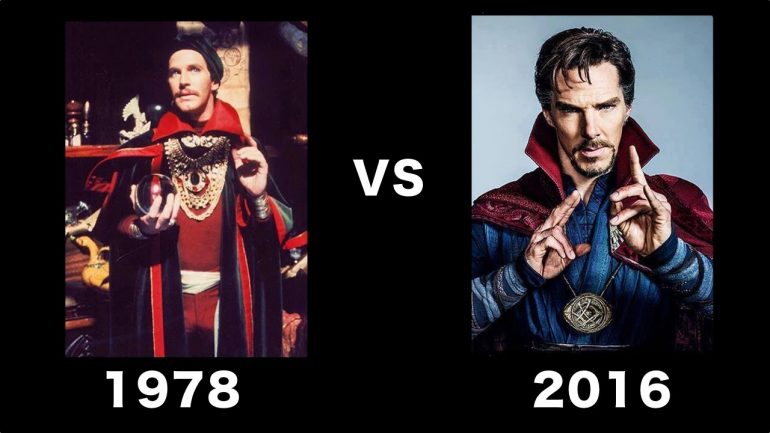 Is it really that bad? Let’s take a look at the high and low points of Doctor Strange 1978…

00:00:43 There’s some ominous mood-music that sounds like it’s from Evil Dead as we have to read all about mystical battles of good and evil in a place known and unknown… well that’s reassuring to know. Thankfully the Doctor Strange title and Seal of the Vishanti logo are reassuring.

00:01:27 Get the Dramamine and the earplugs. This moody music and montage of mystical symbols are like experiencing a bad drug trip. Nice to see that they kept that Steve Ditko feel though.

00:03:25 Jessica Walter (Lucille from Arrested Development) looks pretty saucy as Morgan le Fay, and she’s just been told to kill the current Sorcerer Supreme, who’s dying and needs a successor. Or she can kill the successor, whichever she chooses. Her boss looks like a giant red pickle with eyes. Seriously.

00:08:00 It looks like the old Sorcerer Supreme isn’t the Ancient One, and he’s not in the Himalayas. He’s the Past Middle Age One and his home is New York. Hey, at least it’s the Sanctum Sanctorum…

00:10:30 Enter Doctor Stephen Strange! He’s arrogant, he’s a womaniser, and he just dropped one of the best dialogue zingers in history about the standards of the woman he was with the night before! But wait… he isn’t a neurosurgeon, he’s a psychiatrist treating alcoholics. Uh… 00:15:50 …he’s alive! Not only that but he’s walked away from it all and is using his glowing hand to fix his back pain. I bet he taught Mister Miyagi.

00:19:15 Doctor Strange is doing his rounds, but the real question here is: why would they show horror movies to psychiatric patients? Are they crazy?! I’m no doctor, but…

00:24:04 The young woman is being psychically attacked by Morgan. It’s hard to know what’s more terrifying, that or the free-form funk-rock soundtrack that’s been included to boost the tension. To escape both, this girl has run into the road and caused a single car pile-up.

00:27:46 Naturally, she’s been taken to the psychiatric ward for treatment and her doctor is Strange. He recognises her from his dreams and goes a bit vacant, but that still doesn’t stop him from checking out her legs.

00:33:45 Morgan’s trying to break into the Sanctum Sanctorum, using a mind-controlled cat. The cat gets an electric shock from a magical barrier, and we can only imagine how handy that is for dealing with door-to-door salesmen.

00:37:40 The Past Middle Age One (called Lindmer) has gone to the hospital and used his Jedi mind trick to get past security. He has to because someone needs give some exposition and tell Doctor Strange that the girl is Clea. That’s what counts for action so far… 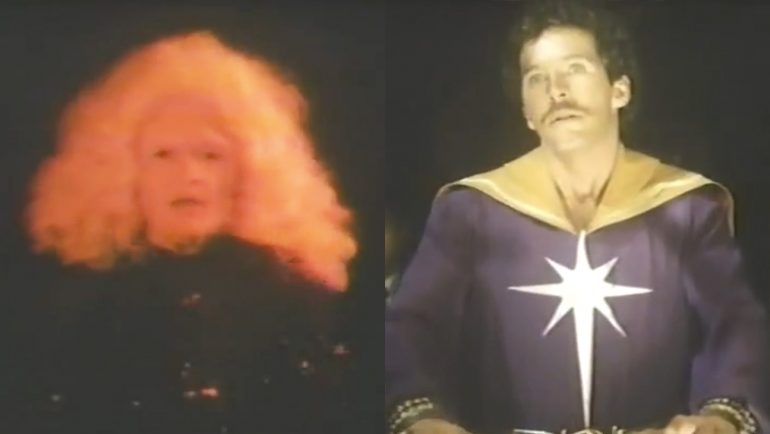 00:40:30 When a weird old guy invites you to his house to show you something magical, what would you say? At least Lindmer didn’t offer Strange some candy.

00:45:22 Morgan tries to kill Strange by, um, having him save a kid on a wobbly bicycle from being hit by a graffiti-covered bus. Couldn’t she just get a gun or something? He hasn’t got any powers yet, so getting rid of him should be easy!

00:52:44 Clea’s in a coma and it’s up to Doctor Strange to get her out of it. Thankfully his Seal of the Vishanti magic ring has been supercharged by Lindmer, and he’s going to head to the astral plane to rescue Clea based on no real evidence at all. What kind of a scientific doctor is he?!

00:54:09 And just like that his trip begins! Picture the opening credits sequence of the 1989 The Punisher film meeting the Beyond the Infinite sequence from 2001: A Space Odyssey and they had a really ugly kid. That’s this trip to the astral plane. Actually, it’s a bit Buck Rogers. The music makes it worse.

00:57:41 Doctor Strange rescues Clea but is attacked by a knight. Well, actually they’re just confronted by a knight, and Strange gets rid of him by reciting the only spell he knows and that just happened to be taught to him three minutes ago. You’re a wizard, Stephen!

00:55:50 Morgan doesn’t like failure and neither does the deformed red pickle monster she serves.

01:01:00 Strange is putting the moves on the healed-up Clea. No surprises there.

01:04:40 After everything he’s now seen and done, Stephen Strange has decided he wants no part of magical hocus pocus, which he claims he doesn’t really believe anyway.

01:06:17 Worse than that, he’s let Morgan enter the Sanctum Sanctorum disguised as a cat! What a chump.

01:07:57 Wong gets in a battle-of-the-glowy-hands with Morgan, providing this film with a rare action sequence! As punishment for this, he gets left unconscious in a ring of fire. 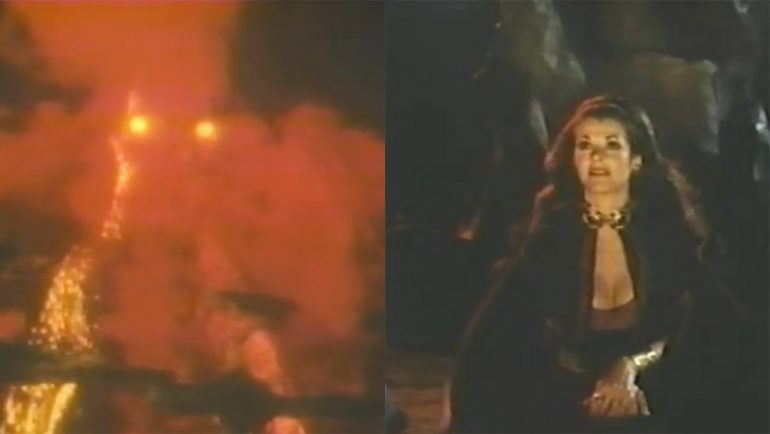 01:11:00 After another glowy-hand battle (this one against Lindmer) Morgan commands a demon to take him to… well, wherever she lives.

01:13:30 Morgan’s just wild about Stephen Strange. After a quick psychic attack on Clea, she’s now urging the doctor to join her so that she can unleash his powers. So to speak.

01:15:39 Morgan just gave him a reasonable-looking costume to wear that looks like the one from the comic books. Not only that but she’s just given him some magical powers too. In exchange he’s happily kissing her, and it may just be a matter of time before they start the whoopee machine. Doctor Strange is a boy-toy!

01:19:31 Morgan’s pushed him a bit too far though in showing him the kidnapped Lindmer. With no training at all, he’s still winning the unimpressive fight. They might as well just shine torches at each other.

01:20:09 Morgan’s angry but the deformed red pickle monster won’t hear her pleas. Also, she just called herself “Ishtar, bloody Ishtar”. I remember the film Ishtar, and she’s nowhere near as awful as that movie.

01:22:30 Wong’s okay, Doctor Strange is about to be given the mantle of Sorcerer Supreme, and Lindmer reckons the robes Morgan gave Strange are fine for him to keep. That’s good, I heard there’s a no returns policy in the astral plane.

01:25:04 A glowing box seems to have made Doctor Strange the new sheriff in town. Maybe that’s why he’s now got a goofy star on his jumpsuit. I don’t mind saying that he looks stupid, in every sense of the word.

01:28:37 Back to the hospital for Doctor Strange to get chewed out by his boss and a walk with Clea. Yawn.

01:30:50 Creepy music alert and it seems like Morgan Le Fay has a new plan to conquer the world: self-help seminars where she can amass a legion of followers and teach them to be evil sorcerers. That’s a smart scheme, actually…

01:32:30 In a moment that makes Strange look like a complete jerk, he screws up a park performer’s magic trick and grins about it. That’s not funny, man! This poor slob was just trying to earn a living! This guy doesn’t visit Strange at his work and screw up his filing cabinets, so why would Strange show off like this and ruin a guy’s job?

01:33:30 It’s over! They had a nice sketch of Doctor Strange behind the credits but, with no post-credits extra scene, it’s all done!

So what was the problem with 1978’s Doctor Strange?

Aside, that is, from changing the entire origin of him and giving him a lousy costume just minutes from the end? The real issue here is that this film is just boring.

It isn’t scary, it isn’t fascinating, and the characters all seem to be lacking any emotions whatsoever. With no sense of menace in this film, the hero doesn’t look particularly heroic – or even interesting. There’s too much talk and not enough of anything else. Because of this, the story moves so slowly it doesn’t seem to go anywhere.

Oh, and the soundtrack was awful.

Worse, every scene in the hospital tries to reinforce the idea that it’s a hospital by having a nurse making announcements on the PA system. One or two would have been fine, but instead, it seems to happen every five seconds. That probably explains why the PA announcer is listed in the credits so prominently.

There isn’t much to recommend about the Doctor Strange 1978 movie.

That being said, the concept of Morgan’s plan to brainwash people and turn them into evil minions with a self-help system is pure genius, and it’s a shame it wasn’t the main plot. Wong was good but underused, and they did introduce Clea.

But in every way the animated film and the new film is superior.