As is the case within the South African market, there has been significant growth in many categories for various reasons. In the case of the portable devices, especially those forming part of the content creation industry, the recent increase in sales is contributed to the rise of the social media influencer, YouTuber and the likes. Additionally, the market for rugged devices for the more extreme creators has also grown. GoPro has been dominating this market segment for some time now, with competitors recently entering the market with strong competition. With a wide variety of portable devices and has recently released its own competitor to the ruggedised portable camera market, DJI has introduced the DJI OSMO Action. 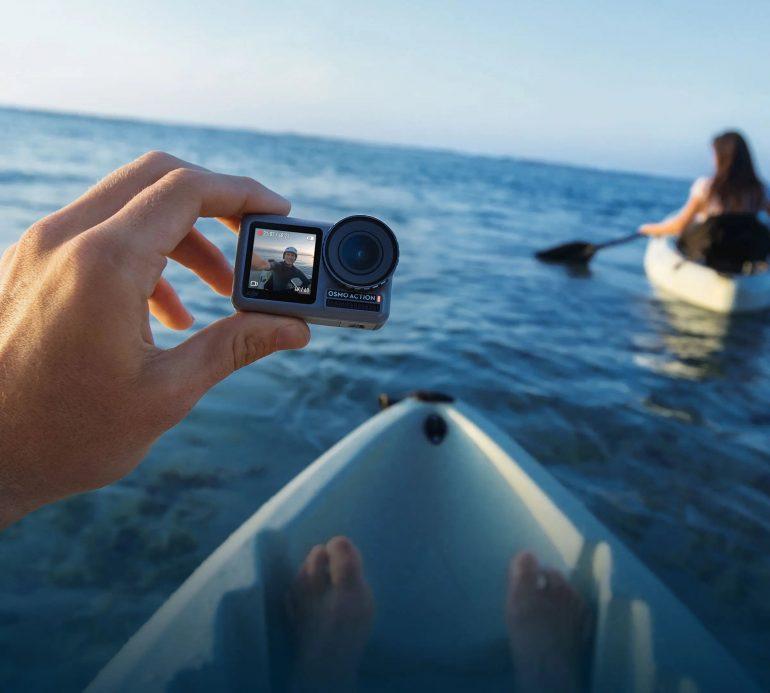 Right off the bat, you’ll get the familiar feeling that the OSMO Action looked rather familiar. That’s because, at first glance, the Action looks very much like the GoPro Hero7 Black. Looking at all the competitor units within the range, there’s very little actual difference between many of them. The units are built to be as small and rugged as possible, with an LCD display and lens in the front. The Action is no different, a rectangular unit with a ruggedised shell with an LCD on the back. The biggest difference between the Hero7 and Action, in terms of the design, comes in the form of the rounded lens on the Action, compared to a square covering for the Hero7.

In terms of physical specifications, the Action has dimensions of 65x42x35mm and weighing in at 124g. While it may be a tad larger the Hero7 weighs 10g lighter at 114g. This, however, isn’t something you’ll notice unless comparing the two side by side, with the extra 10g not being significant enough to weigh you down. Another advantage the Hero7 has over the Action is the inclusion of a built-in GPS tracker. Nor an HMDI port for that matter. The buttons are solid but not difficult to press, situated on the top and right side of the unit.

When it comes to the ports, the DJI OSMO Action has a USB Type-C port for charging and transfers, as well as a microSD card slot. The unit is also waterproof up to 11 metres for 60 minutes without a case. The device comes standard with a cage included, which allows users to connect to a few of the GoPro accessories, stands and the likes. This is quite a nice feature, especially for buyers who have invested quite significantly on other units, enticing them to switch without worrying about purchasing the same accessories again. 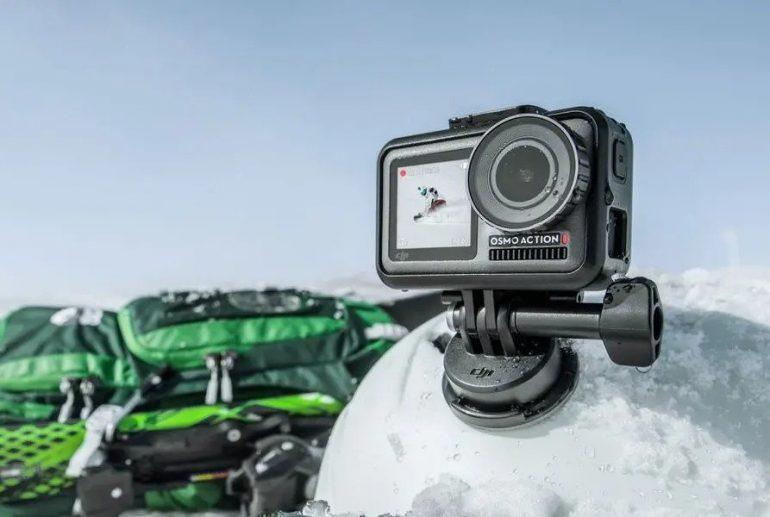 As mentioned earlier, the DJI OSMO Action has a rear camera, 2.2″ touchscreen with 325ppi and 16:9 aspect ratio. The screen is larger than that of the Hero7 by a full inch, which also has a 4:3 aspect ratio. It isn’t as bright as the one fitted on the Hero7 and doesn’t make for the best viewing in direct sunlight. With a better resolution, however, the screen does give a fairly accurate idea of the final video or photo. Touch sensitivity is good and had no issues with navigating any of the menus and options available.

What’s great about the Action is that it includes a secondary screen on the front. The 1.4″ LCD has a 300ppi pixel density and is great for any framed video and selfies. There aren’t any additional features on the screen other than providing some information, with no touchscreen capabilities. 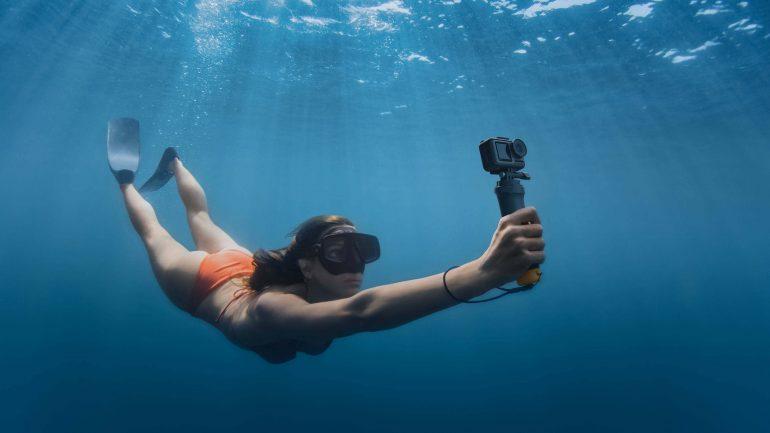 When it comes to actual shooting with the DJI OSMO Action, there are quite a few options and features to make use of. The device is capable of recording in 4K at 24, 25, 30, 48, 50 and 60fps. Users can also choose 2.7K at the same frame rates. For 1080p and 720p video, you can choose up to 240fps. Videos can be shot in 16:9 or 4:3 aspect ratios, with more options available for the former. Here the device supports DJI’s electronic image stabilisation known as ‘RockSteady.’

Unfortunately, using this stabilisation feature does mean that a lot of the video is cropped as an end result, which, while understandable, is quite noticeable. The Hero7 doesn’t crop as much of the image when using its ‘Hypersmooth’ optimisation, which by default makes it a better fit for most users, even while the smoothing effect is pretty much similar on both. Both cameras are capable of shooting in RAW and JPEG formats. While they use different formats when it comes to RAW photos, they’re both still editable in PhotoShop, PaintShop Pro and the likes. The DJI OSMO Action offers native slow-motion recording, which you can film at any length of time, which is quite useful.

Image enhancements such as HDR are also available, but not always very useful. For example, shooting in HDR, which the Hero7 doesn’t include, is meant to provide an improved dynamic range, but in this case, simply increases the exposure and saturation with a darker contrast. The use of this also affects the overall battery life. It would, thus, be more suitable to film in standard video and add any correction during editing, which allows you to shoot for longer while away from any charging point. In a like for like comparison of the standard video footage, the Action is not as bright as the Hero7, although it does have sharper results.

One of the rather mediocre results was the low-light shooting, which doesn’t provide much usable or professional-looking footage. Comparisons with the Hero7 provides two different types of footage at the end, both pretty poor in any event. The Hero7 shoots a lot brighter but adds quite a bit of noise as a result. On the other hand, the Action doesn’t have much graininess and with sharper images, but videos are quite a bit darker. I suppose, for the time being, we shouldn’t expect any nighttime video footage from our mobile action cameras.

Another feature in both cameras that lack any real quality is the audio from either microphone. While the sound recorded is audible, again, it isn’t of any professional-grade, which at times seems faded into the background with a lot more wind being picked up than any meaningful sounds. Where the Hero7 just shades it is that it softens a lot more of the harder/louder sounds from bumps, etc. that aren’t great, while the Action often times distorts with the same sounds. DJI has confirmed that it will soon release a Type-C to 3.5mm adapter for its range of cameras, which will allow you to attach external microphones where needed.

In terms of battery life, both units are fairly similar here. When shooting in 4K@60 with the same settings (GPS turned off on the Hero7), they averaged around the 60-minute mark. The Action averages around 55 minutes, whereas the Hero7 around 62. Switching to 30fps, the averages move up to the 90-minute mark, the former at 88 minutes and the latter at 91, as things begin to even out. 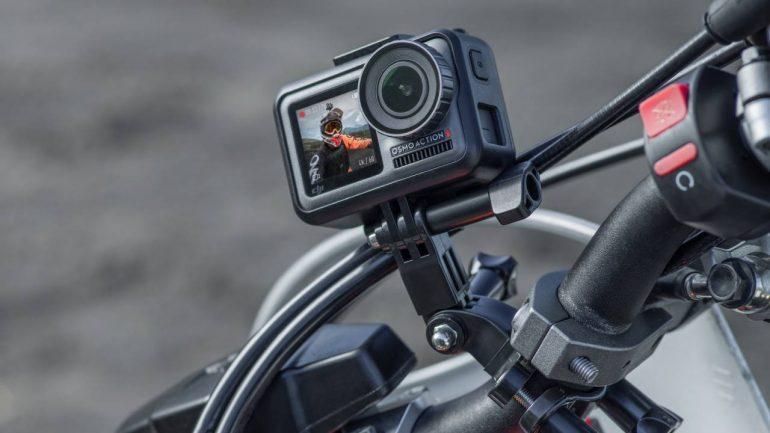 GoPro has dominated the action camera market for over a decade with most of the competition falling at the wayside. DJI, on the other hand, has dominated the gimbal and drone market during the same period, and while GoPro attempted to move into this space, it, too, was unsuccessful in crossing over. This time it’s the chance of DJI to attempt expanding its portfolio. With the likes of the OSMO Action among a few other portable cameras, the team has done quite a good job in creating a product that is able to put up some competition for GoPro Hero7 Black range. While the Hero7 still shades it in the end, the first attempt in the mobile action camera space is a sign of a great battle between two giants of the industry. 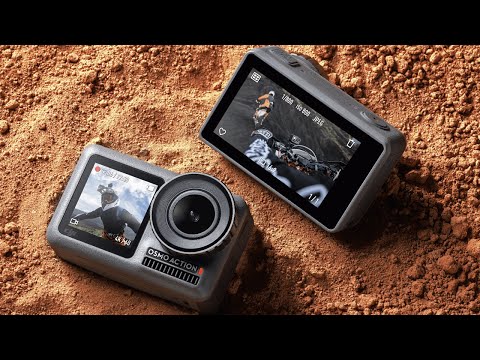 At a retail price of R5,999, the DJI OSMO Action is about R500 more affordable than the Hero7 Black on average, although you're bound to find a few deals given that the device has been out for quite a bit longer. With the Hero8 soon to be released, GoPro might stretch their advantage over DJI in this specific portfolio until its next release. But, with prices expected to be almost R2,000 more, many prospective buyers may opt to look at the more affordable Action and Hero7 units.