Divinity: Original Sin II is considered to be a love-letter and spiritual successor to the grand old isometric PC-RPGs of old: your Baldur’s Gate and Fallout 1, Fallout 2, and so on. In that sense, when this game was first released last year, not only was it hailed as a resounding success for how well it achieved that goal, it made it even more interesting when a console port was announced.  Surely those lowly peasants, with their gamepads and their active social lives couldn’t handle the complex systems and various buttons that are only provided by a keyboard and mouse? Well, that’s what made this game so interesting to review. Because in many ways, this too sets a benchmark for what a console port can be when you hold it to high enough standards. Even though Divinity: Original Sin II has been out for a while, let me go over the basic gameplay and story systems, for anyone just catching up at the moment. You exist in the world of Rivellon, many centuries after the events of the first game. I didn’t play that game, and I didn’t find myself lacking in any noticeable story knowledge here. It’s all fed to you quite well.

…you are a Sorcerer, an individual with fearsome potential power, and as such, you have been captured and your power blocked up…

You create a character, picking either one of about six with a pre-existing storyline, or you create your own entirely, choosing from the usual Human-Elf-Dwarf races, with a couple extra interesting ones like Lizard Person or Undead. Whatever pre-existing characters you choose not to be will be recruitable as your party members later. You choose a starting class, but it’s not something you’re stuck to – you can level up and learn skills to become whatever kind of hybrid warrior you want, and there is a range of different elemental classes and weapon types to specialise in.

You wake up on a ship, where you are a prisoner of the Magisters: you are a Sorcerer, an individual with fearsome potential power, and as such, you have been captured and your power blocked up. A shipwreck gives you your chance for freedom, and from where your story begins. Gameplay takes place from an overhead perspective, and you can zoom in and out to an impressive degree. You can eventually have up to 3 other party members with you at a time, making a group of 4 adventurers. Questing is split into adventuring and speaking to people to learn things and get missions, and battling. Adventuring is wonderfully organic – it doesn’t hold your hand and you have to think a little bit about the choices and things you say because there are real repercussions.

Battling is also quite fluid and interesting. It is essential, Turn-Based.

Characters also react in natural ways because of their history. It was much harder for me to recruit the Elf Assassin, because of my character’s past as a slave master, and she was a former slave. Luckily there was a way to get around that, but it was up to me as the player to discover that and make it happen.

Battling is also quite fluid and interesting. It is essential, Turn-Based. Each combatant starts combat with a different amount of action tokens, which they can use to move or attack or cast spells or use items. Various stats determine who goes first and who has the most tokens, but once in the thick of it, the goal is to use the environment in interesting ways. There’s a complex system of elements here: oil can be placed with one move, and then set alight by another character on their turn. Water can be electrified and ice blocks can be placed to make characters freeze or slip.

Situational awareness is very important. Combat can look especially pretty with all the particle effects flying around, especially on PS4 Pro, but on regular PS4 there have been one or two moments when I noticed slowdown and texture pop-in. The game overall is quite gorgeous, both with the environments and the character models too. You can zoom in very close and enjoy the view that you have at any moment. Why is this edition is called the Definitive one, and what does that mean for returning players? Well, Divinity: Original Sin II has gone through various builds that were released to the public with various levels of completion, and I even played some of them. What I can say is that this is definitely the most polished and bug-free version. Some quests and especially party member missions have been expanded, and there are other inclusions like an arena mode and different structures of difficulty. It can be a very tactical game if you want it to be, or a very leisurely one you can enjoy for the story.

Once you are used to it, you can get through gameplay surprisingly quickly and snappily with it.

Let me get back to my original point about this being a surprisingly good PS4 port from keyboard and mouse – you use the L2 button to bring up a radial menu with all your various menus which can be switched between (equipment, levels, journal, etc) and you use the R2 button to switch between which character you are actively controlling or equipping. Triangle opens up the skills bar, where you can have assigned the abilities and items you want to use for easy selection. Tapping X picks up or uses whatever you are highlighting, and Square opens the menu of that item to make more detailed choices. Holding down X highlights everything in a ring around you, if you are unsure of which item you want to be aiming for.

Once you are used to it, you can get through gameplay surprisingly quickly and snappily with it. The one slowest area is that choosing abilities from a bar is never as quick as pushing a numerical button on the keyboard, but otherwise, it does well enough. I would not say its superior to PC controls, but it is a more than adequate substitute once you are into the rhythm of it. All in all, Divinity: Original Sin II is a throwback to a genre that many people loved, and with good reason. It is a decent homage while also bringing in enough new developments that it remains interesting. As for being a port, it does very well as one and should not be dismissed out of hand immediately. Definitely worth picking up if you haven’t already, and if PS4 is your main preferred platform. I would say that PC is still the optimal choice if you have a good enough set up for it. But a good effort all in all. 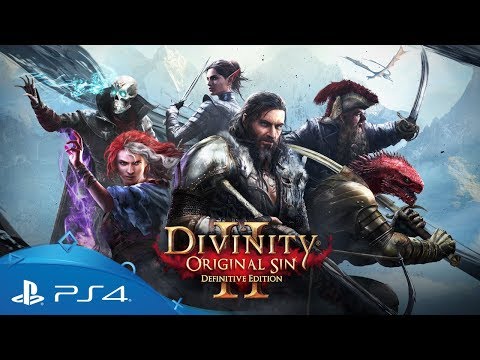 Divinity: Original Sin II is definitely worth picking up if you haven’t already, and if PS4 is your main preferred platform.