When Disney Infinity 2.0 launched and introduced characters from the Marvel universe, it felt as though the dreams I had as a kid had finally come true. Not only could I play with a myriad of Disney and Pixar characters in a world of my own creation, but I was now able to add the amazing cast of characters from Marvel as well. Things just couldn’t get any better. Fast forward to the launch of Disney Infinity 3.0 and Disney have outdone themselves once again. Not only can I use my Disney, Pixar and Marvel characters in the Toy Box 3.0 I now have access to characters from one of my favourite universes, Star Wars.

Instead of reinventing the whole Disney Infinity experience, it feels more like Disney wanted to polish the mechanics already present in the Infinity games. This is not necessarily a bad thing as they have addressed a lot of the complaints and concerns that were voiced by players. Disney Infinity 3.0 is at its core still similar to 2.0, it does, however, have cleaner skill trees, the controls are more responsive and overall it just feels more polished. This is not only thanks to the new gen consoles (which makes everything look prettier) but also due to the involvement of studios that are considered some of the best at what they do. These studios include Ninja Theory (DMC: Devil may cry) who revamped the whole combat system, making it feel more responsive and overall much more enjoyable, as well as Sumo digital (Dirt 2, Forza Horizon 2) that helped perfect the driving mechanics.

Including these studios in the development has definitely paid off. Combat has become a joy and feels more fluid and substantially tighter than in Disney Infinity 2.0 (players are even able to air juggle the enemies). With 3.0 players have also been given the use of Force powers which in combination with the revamped fighting mechanics makes taking on enemies a great joy and loads of fun. This improvement can also be seen in the driving and flying sections of the game, as the controls are more responsive overall. This helps a lot, especially when chasing fighters in space. 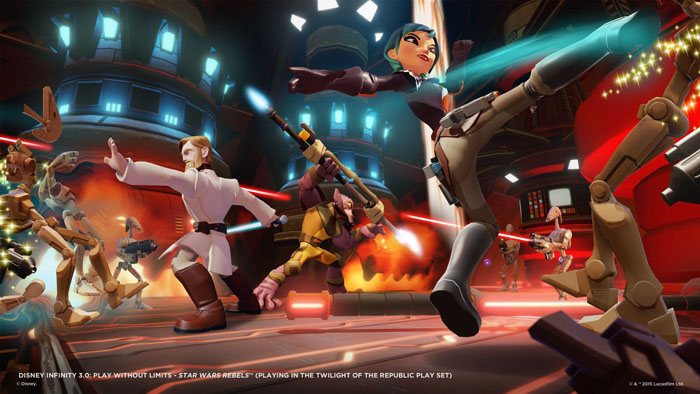 The Disney Infinity 3.0 starter pack includes the Twilight of the Republic play set, which takes place in the Clone Wars television series universe, and includes the Anakin and Ahsoka figures. Playing through the play set takes about 4-5 hours, during this period you will be travelling to the canyons of Geonosis, the deserts of Tattooine, the city skylines of Coruscant and the great palaces of Naboo. Each planet feels distinct and looks true to their movie counterparts. When exploring these locations players will be driving vehicles, fighting enemies and completing all manner of sidequests for the characters that inhabit these planets. 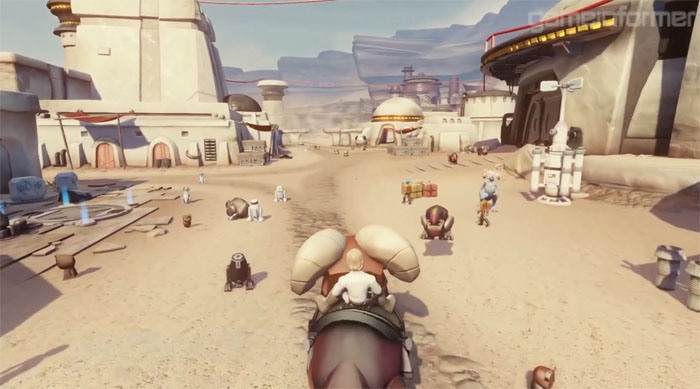 While travelling to these far-flung planets players will also be engaging in space combat. Dogfights in space are just as much fun as they sound. Flying past separatist ships, while chasing after fighters, with lasers whizzing past you really is exhilarating and a huge amount of fun. Each of the pockets of space that surround the planets has their own unique challenges and collectables. Something that I was really glad to see had changed from 2.0 to 3.0 is that instead of having to collect 10 coins in order to bring an outside character into a play set, players now only require one coin, and these tend to be easy to find. This takes away some of the frustration of hunting down coins in order to bring new characters into the play sets.

Toy Box has received a lot of attention in 3.0 as it has been refined and expanded in almost every way. The introduction area is called the Toy Box Hub, and it is from here that you will be introduced to all the new mechanics that Toy Box 3.0 has to offer. The Hub is divided into separate areas, each focusing on their own unique activity available in the Toy Box. I found it great that players aren’t forced into completing a string of tutorials, but instead are able to explore and learn at their own pace. 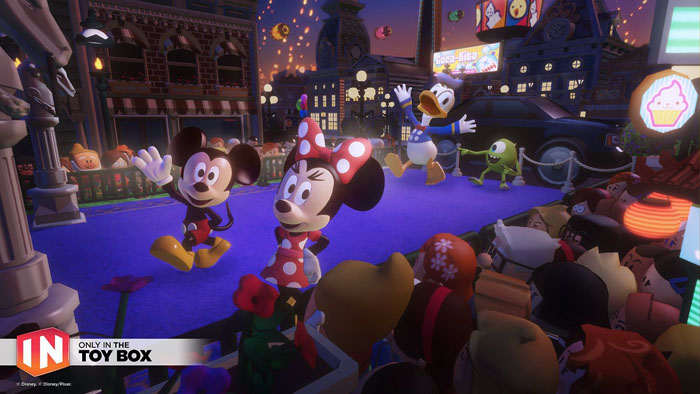 Two new additions to the Toy Box in 3.0 are Farming and Sidekicks, both of these are welcome additions. Sidekicks follow you around while inside the Toy Box. They are able to assist you in combat, and you can equip them with tools and hats which in turn give them special abilities and stat bonuses. Food that you gain from farming can be used to level up your Sidekicks. Each crop that you grow will level up your Sidekick in different ways. Toy Box 3.0 also adds some new gadgets in the mix to use when creating your own worlds. One of the best (and my favourite) is the path creator. By using this tool players can move any object along a pre-determined path. These can include cameras (for those cinematic angles), cars and even space ships. Yes, now you can create your own epic space battles. Some of the big new features for Disney Infinity 3.0 are two exclusive expansions, Toy Box takeover and Speedway. Toy Box takeover basically is a beat-’em-up which allows you to use almost any of the Disney Infinity figures in order to take on Syndrome, who has stolen the magical wands from Mickey and Yensid. Speedway, as the name implies, is a Disney kart racer. It includes Combat, Race and Time trail modes.

One other element of Disney Infinity to take note of is that the Power discs will no longer be blind-bagged. Power disks for 3.0 will be sold in themed-four packs. Each disc will be clearly marked, so there will be no chances of having doubles.

Disney Infinity has once again opened up a world of creativity with endless possibilities for players. With the addition of not only the Star Wars franchise, but new tools and mechanics, Disney has assured that players be spending a lot of time not just playing in the play sets, but creating their own worlds.

Whether you are fighting droids as Yoda, dog fighting through space as Obi-Wan, Pod racing as Anakin or just want to create your own fantastical worlds, Disney Infinity 3.0 has something to offer kids of all ages.