Disenchantment Season 1 Review – Funny But Not All That Disenchantment is set in the medieval kingdom of Dreamland, where a young princess called Bean lived…and she liked to party! While Bean’s father wants to force her in to an arranged marriage, all she wants to do is drink, get drunk, and have some fun – preferably with as few consequences as possible. The solution is simple: run away! Meanwhile, an elf called Elfo is bored with his life on the candy production line in his own village, and has grown sick of the constant cheerfulness and optimism of his fellow elves. His solution is simple, too: run away!

It’s obvious that Bean and Elfo’s paths will cross, and before long they’re sharing adventures in irresponsibility. Of course, it doesn’t help that Bean has a personal demon called Luci, who’s always trying to lead them even further astray.

When the news broke that there would be a new show coming from Matt Groening – creator of The Simpsons and Futurama – I let out a personal cheer. Futurama was one of the greatest comedies of all time, sadly denied the respect it deserved, and Disenchantment had the potential to be even better. Plus, what better place for the new show than Netflix, where it can make some real waves without any major studio interference? A comedy that inverts the clichés of fantasy stories, even the ironic title seemed to work.

Unfortunately, Disenchantment lives up to its own name just a little too much.

The problem isn’t that Disenchantment isn’t funny, because it is. There’s plenty of jokes, from slapstick and groan-inducing puns to highbrow intellectual humour. Sadly though, the timing of it almost always feels off, with just too many moments of boredom between gags and action sequences that seem to suck the energy out of scenes. It simply doesn’t pull viewers in.

Partly that’s because of the characters. Bean is great, and it’s good to see a capable female lead character, but she also seems inconsistent. Is she a fun-loving goofball, a strong independent person, or an irresponsible brat? It’s hard to tell from one story to the next. Elfo, by contrast, works only in small doses as the eternally cheerful innocent who constantly suffers. Then there’s Luci, who should have been a scene-stealer but isn’t. There’s nothing wrong with having a lovable villainous rogue with a sly tongue – but whining constantly that people should “Do it!” and give in to their dark urges, it’s dull. He just isn’t funny, and without having gusto he’s boring.

Then, of course, there’s the other thing. Haven’t we seen this all before? 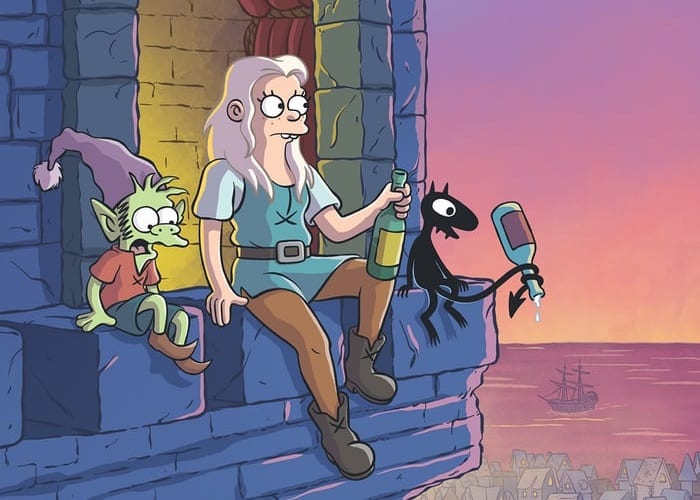 While hardly a crowded market, the fantasy-comedy genre still has its fair share of classics. The Princess Bride, Shrek, Galavant, they all got here first. Plague jokes, not-quite-mermaids, fairy prostitutes, a repulsive king, an arrogant prince, every comedy cliché is there. There’s not enough originality on display here, and seems almost too tame. It’s good that it isn’t too adult, but it’s hard to push boundaries and make it look impressive while a show like Rick and Morty smashes through them on a daily basis with ease.

There’s potential here, real potential, for Disenchantment to kick in to a higher gear when the second block of episodes drops. Personally, I hope it does. For anyone interested it’s worth a look and you’ll find some fun, but don’t expect greatness. At least, not yet…