Deus Ex: Mankind Divided – A Criminal Past DLC Review – Doing Some Time In The Slammer Deus Ex: Mankind Divided was one of my favourite games of 2016. It offered a unique setting and gameplay mechanics that allowed you to take on missions in any way you wanted. It never forced you to go in guns blazing but never punished you for doing so. A Criminal Past is the latest DLC for the game and gives us more of the same gameplay we love, albeit in a new and fresh setting. Welcome to the Penthouse. The Criminal Past DLC takes place 9 months prior to the events of Mankind Divided as we follow Jensen on his first mission for Task Force 29. Jensen’s mission is recovering information from an undercover agent, which sounds easy enough for a heavily augmented superhero. The only problem is that the agent is currently being held in the Penthouse, which isn’t as fun a place as the name would suggest.

The Penthouse is a high-security prison for augmented criminals that is precariously perched on a massive rock and guarded by cameras, drones and, of course, armoured guards (in summary, there ain’t no escaping from this place). The only way to get behind the heavily guarded walls is for Jensen to be sent in as a criminal (à la Death Warrant starring Jean-Claude Van Damme).

No sooner does Jensen arrive at the prison and he is implanted with a chip that disables his augmentations, which is a very convenient way of stripping back the player’s powers and getting them to start over from scratch, this is not as bad as it sounds. It’s an interesting way of switching up the gameplay a bit and getting players to rely less on their augmentations (which you do get access to eventually). Now, getting to the agent you seek isn’t going to be easy (it is prison after all ), and with aug hating guards and deadly criminals around each corner, tensions are at an all-time high. Jensen has his work cut out for him. Just as with real prison (I assume), Jensen quickly learns that making friends and doing favours (not that kind! Get your mind out of the gutter) is the best way to get to your objective. This means that Jensen will initially be spending a lot of time strolling through the Penthouse dodging guards, drones and cameras as he steals and trades his way through prison.

Initially, it took me a while to figure out what the best course of action would be, but once I understood how the prison functioned I was well on my way to completing my mission. It is truly refreshing not having your augmentations to rely on and, instead, having to think and figure out how your surroundings and relationships between people work. It’s not just your augmentations that is taken away from you, items and pickups are also quite scarce, which makes finding one just that more rewarding and exhilarating.

The prison itself reminds me of the Palisade Bank level in Mankind Divided and is probably one of the most interesting and well-designed levels in a Deus Ex game to date as it offers enough nooks and crannies to hide in and take out your foes from the shadows (like a cyber ninja). Once again, players will be searching for vents and computer terminals as they make their way to their objective. This time though, it feels more tense and nerve-racking as you don’t have your augmentations to rely on once you are spotted.

While sneaking around might not be your strong suit, the game always offers players alternatives. Wearing the wrong prison outfit? Don’t want to sneak around? Then a little exploration and sneaking will quickly help you find the correct prison outfit to put on. It’s touches like these, where the game gives you different options for reaching the same goal, that makes a second playthrough worthwhile. Luckily, the game clocks in at around 7-8 hours which makes it short enough to warrant another play through.

The story does stumble a bit and tends not to be as memorable as one would expect. That said, it does offer enough incentive to go sneaking around the prison to complete objectives and become bad-ass.

I thoroughly enjoyed returning to the Deus Ex universe. With its intricate levels and unique setting, A Criminal Past offers players a familiar yet refreshing experience, one that will test your thinking and planning skills. And although the story does stumble here and there, I still found the DLC a worthwhile experience. 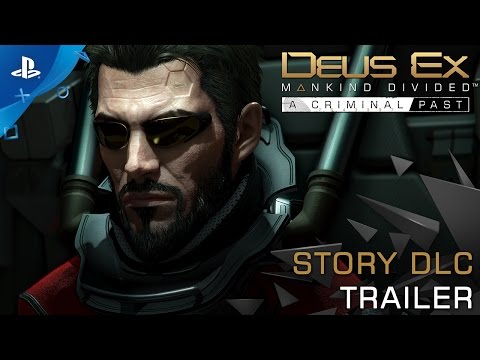