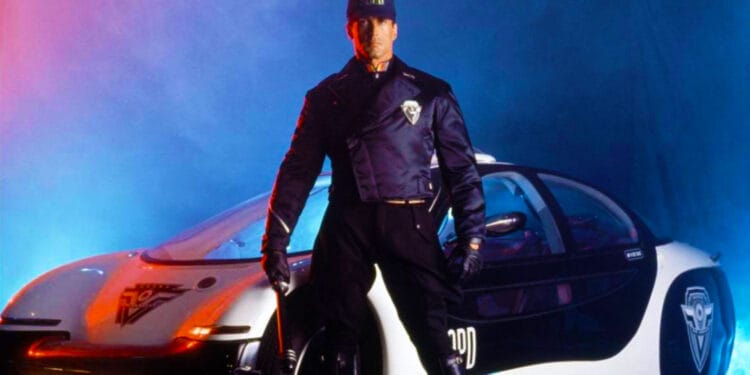 Forget about Rambo and Rocky, because Sylvester Stallone‘s best role was as Sergeant John Spartan in Demolition Man. It’s been nearly 28 years since the Marco Brambilla-directed feature was released and it’s shocking that Demolition Man 2 hasn’t happened yet.

Stallone versus Wesley Snipes in a futuristic action movie. That premise alone is enough to send the audience into a frenzy—and it did in 1993. Making almost $160 million from a reported $77 million budget and receiving 60% approval on Rotten Tomatoes, it did the business at the box office and satisfied the pesky critics in one go. Basically, it was a smash hit.

The original writers had already mapped out the plans for a sequel. Speaking to Vulture, screenwriter Daniel Waters revealed that Spartan had a daughter. But because he was cryogenically frozen, she would actually be older than him in the timeline.

So, why didn’t a sequel ever happen? In 1995, there was talk about Demolition Man 2, but it never went anywhere. Then, in 2006, Stallone said that he feared the ship for it had long since sailed.

Last year, Stallone changed his tune, revealing on his Instagram account that Demolition Man 2 was in active development. He said:

“I think it is coming. We’re working on it right now with Warner Bros. It’s looking fantastic. So, that should come out, that’s going to happen.”

Of course, until the actors physically appear on set, anything can happen in showbiz. Hollywood is notorious for saying one thing and doing another, and with all the constant shake-up at Warner Bros. it’s possible that Demolition Man 2 could get canned before it sees the light of day.

Though considering Stallone’s clout in the industry, he is certainly someone who can get movies made. It also helps that Demolition Man has been in the public consciousness in the last year, with its contact-free high-fives making people wonder if the film accurately predicted the future of society.

Undoubtedly, with all the buzz around the original movie and Stallone being comfortable enough to announce it on social media, it must mean that we’re closer to seeing Demolition Man 2 than ever before. It’s been a long wait, but hey, we might finally get an explanation on how the three seashells work pretty soon.

Taking to Instagram, the 75-year-old actor recently shared an image describing Demolition Man. The text on the photo says, “In 1993, most critics dismissed a one-of-a-kind movie as just a stupid action flick with ‘excessive explosions.’ Except that it smartly predicted and joked about political correctness, toxic masculinity, racial bias, the hysteria around cancel culture, and even more. By now, it’s obvious that the movie was brilliant. But it still doesn’t get enough credit.”

“I always enjoyed this movie,” Stallone added in the caption on social media. “It was a Great Action film wonderfully directed By Marco Brambilla. And the writers were way ahead of their time.”

Tell us, would you like to see Demolition Man 2 starring Sylvester Stallone? Let us know in the comments section down below.